The $250,000 Johns Hopkins award recognizes scholars who are on the cusp of becoming leaders in their fields

Cell division is the fundamental process for life. But when it goes awry, life itself can be threatened.

The fragile balance of centrosomes within animal cells and the cellular functions these organelles control are essential to a form of cell division called mitosis. That's where molecular biologist Andrew Holland focuses his research.

"We've been trying to understand if there are differences in the way healthy cells and tumor cells divide, and if we can exploit those differences in therapies to selectively destroy dividing tumor cells and spare the healthy cells," said Holland, an associate professor in the Department of Molecular Biology and Genetics and the Department of Oncology at the Johns Hopkins School of Medicine.

In a surprise virtual presentation last week, Holland received the $250,000 President's Frontier Award in recognition of the outstanding promise of his work. The meeting, arranged under the guise of a final interview between Holland, JHU President Ronald J. Daniels, and Provost Sunil Kumar, was "Zoom bombed" by proud members of Holland's lab, his colleagues, and members of Holland's family—including his wife and children and his parents, who called in from their home in the United Kingdom to share the moment with their son. 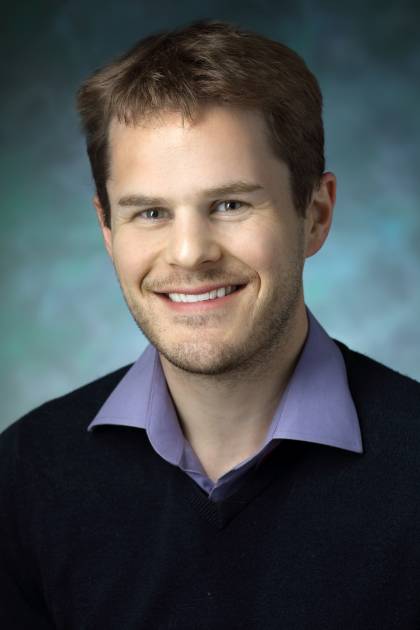 He is the seventh Johns Hopkins faculty member to win the award, which celebrates individuals who are breaking new ground and are poised to become leaders in their field. The award affords researchers the freedoms to pursue new lines of research, expand their laboratories, and support their lab members.

"In your work you have truly defined the pioneering spirit of Johns Hopkins," Daniels said during the call. "Your groundbreaking research into the role of centrosomes in cell division–that most basic function of life–has not only broadened our understanding of human physiology but has also revealed incredible potential to help us address a wide range of illnesses, from microcephaly to cancer, by making it possible to spare healthy cells while targeting malignant ones."

Holland's centrosome research focuses on how the tiny membraneless structures ensure each daughter cell formed during mitosis contains the correct genetic information, and what happens when the work of the centrosome fails. Holland's laboratory has discovered that errors in the distribution of genetic information during mitosis can lead to neurodevelopmental disorders and may contribute to the development of cancer.

"Andy, your work has been cutting-edge for many, many years," said Paul B. Rothman, dean of the medical faculty at the Johns Hopkins School of Medicine. "Obviously your understanding of centrioles, centrosomes, how they function in normal cells and how their dysfunction plays a role in oncogenesis is important. … Your work is careful, and thoughtful, and innovative, and so it's really wonderful to be part of this and to congratulate you on this very prestigious award."

Holland himself attributed the award to the support of his Johns Hopkins peers and his lab members.

"I'm really privileged to have such great colleagues at Johns Hopkins," Holland said. "I think my research has been really enabled by the great collegiality and support of everyone in my department and throughout the School of Medicine. … It's really special that I get to celebrate this moment with all of these people who have been really important in my life, and also the fantastic lab members who I've been extremely fortunate to have work with me. You've made all of this possible."

"Andrew instills in us the importance of rigorous research, and this award is a testament to his own dedication to science. This award could not have gone to a more deserving PI."
Members of the Holland Lab

Through their studies of the cellular machinery of mitosis in cancer cells, Holland and his lab members have uncovered a promising new avenue for cancer therapeutics that more reliably targets cancer cells while preserving healthy cells. Suppressing the cell cycle regulator protein PLK4 has a catastrophic effect on the mitosis of tumor cells—but not healthy cells, the team discovered. They are now working with scientists in the Johns Hopkins Drug Discovery Program to develop PLK4 inhibitors for cancer treatments and partnering with researchers in the Sidney Kimmel Comprehensive Cancer Center to test these compounds in preclinical cancer models.

Additionally, Holland's recent research examines how cells respond when the process of mitosis goes wrong, and how a fail-safe mechanism meant to protect cells from malfunctioning division can itself threaten healthy cells. The mitotic surveillance pathway, Holland found, prevents the growth of cells that take too long to divide, but chronic activation of the pathway can lead to too much cellular destruction. Specifically, the team discovered that overactivation of the pathway can lead to reduced fetal brain growth and primary microcephaly. Their research found that the pathway relies on the enzyme USP28, and thus USP28 inhibitors may be viable therapeutics for developmental disorders linked to overactivation of the mitotic surveillance pathway.

"Dr. Holland's research is at the cutting edge of biology today and is bringing a new level of understanding to both fundamental cellular mechanisms and to human disease," wrote molecular biologist Jeremy Nathans in a letter nominating Holland for the President's Frontier Award. Upon hearing the news of Holland's win, Nathans added in an email to the Hub: "Andrew is innovative, collaborative, and generous. He is a terrific scientist, mentor, and colleague. We are delighted by his selection for the 2021 President's Frontier Award."

Speaking as a group, the members of Holland's lab offered their principal investigator hearty congratulations for his award—and a bottle of champagne and a selection of his favorite snacks. "It has been very inspiring for us as young scientists to see how Andrew's career has developed," they wrote in an email message to the Hub. "Andrew instills in us the importance of rigorous research, and this award is a testament to his own dedication to science. This award could not have gone to a more deserving PI."

Holland said he plans to use the funds to purchase a highly specialized live-cell imaging microscope for real-time monitoring of cell division. He also plans to use the funds to bolster collaborations and relationships with colleagues across the university. His lab members add that the funding will allow them to pursue new avenues for research that had been previously impeded by lack of funding.

"It's really special that I get to celebrate this moment with all of these people who have been really important in my life, and also the fantastic lab members who I've been extremely fortunate to have work with me. You've made all of this possible."
Andrew Holland

The President's Frontier Award was originally launched with a commitment of $2.5 million from trustee Louis J. Forster, A&S '82, SAIS '83, and is now partnered with a $1 million donation from alumnus David Smilow, A&S '84. The goal of this award is to support exceptional scholars among the Johns Hopkins faculty who are on the cusp of transforming their fields. The award recognizes one person each year with $250,000 in funding for their work and beginning in 2021, top finalists are also recognized with substantial funding.

Three faculty are being recognized with President's Frontier Finalist Awards of $80,000 to use toward their proposed research: 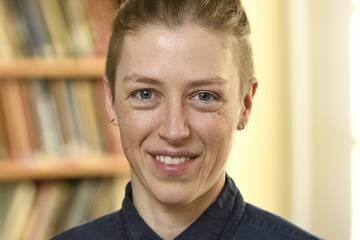 Published Jan 16, 2020
The $250,000 award, presented Thursday to Emily Riehl, supports Hopkins figures who are breaking new ground and poised to become leaders in their field