Scott Bailey, an associate professor in the Bloomberg School of Public Health's Department of Biochemistry and Molecular Biology, says his work figuring out the nuts and bolts of cellular structures that nobody has seen before is driven by "just the curiosity of it all." 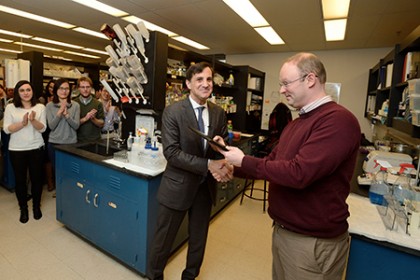 That curiosity has led Bailey to breakthroughs in visualizing the atomic structure of a large multiprotein complex with a key role in bacterial immunity. It has set the stage for the development of new drugs to prevent antibiotic resistance and will foster progress in genome editing strategies that may someday lead to precision treatments for genetic disorders.

"This award is to just dream and follow wherever curiosity leads him in advancing his research agenda," university President Ronald J. Daniels said after surprising Bailey in his lab with the $250,000 award. Joined by Provost Robert C. Lieberman, the president congratulated Bailey on the transformative impact he has had on his discipline, adding "this is a vote of confidence in knowing the best is yet to come."

The Frontier Award was made possible through a donation from two Johns Hopkins alumni: university trustee Louis J. Forster and alumna Kathleen M. Pike. The award will recognize one person each year for five years with funding for their research expenses. When it was announced in October 2014, the program was characterized as an investment in a researcher's future potential, rather than a lifetime achievement award.

University leaders said that in addition to President's Frontier Award winner Bailey, three outstanding 2016 finalists are each being recognized with $50,000 presidential monetary gifts to fund their research and advance their academic pursuits. Those three finalists are Xin Chen, an associate professor of biology in the Krieger School of Arts and Sciences; Michael Hersch, a composer and pianist on the faculty of the Peabody Conservatory; and Shanthini Sockanathan, a professor of neuroscience in the School of Medicine.

Bailey, who also is affiliated with the Bloomberg School's Malaria Research Institute, says it was a shock to find his students and colleagues crowded into his lab with a large banner declaring him this year's winner.

"It's phenomenal," he says. "It's very sort of Hopkins in the sense that it is like a family here. I feel it at all levels, from the department to the school to the university."

Bailey says he is already thinking about what his team can do with the money, including "the ways we can push into new ground, to take on more risky projects. Government funding is more narrowly defined in what you can do. With this you can go after a problem and really take risks with it. … That is where the breakthroughs tend to come."

Bailey grew up in Sheffield, England, and earned his bachelor's and doctoral degrees at the University of Sheffield, U.K. He completed a postdoctoral fellowship at Yale before joining the faculty of the Bloomberg School of Public Health in 2008. In recent years Bailey's groundbreaking research has led him to be lauded as one of the best structural biologist of his generation.

"As a researcher, Scott is incredibly gifted," says Pierre A. Coulombe, professor and chair of the Department of Biochemistry and Molecular Biology in the Bloomberg School. "He's bold in the choices he makes, but steady and poised as he is pursuing a question. He also has been a very strong mentor to his students."

Bailey works at the edges of scientific knowledge to understand at the molecular level how bacteria's immune systems fight off the threat posed by harmful viruses.

Using x-ray crystallography, Bailey and his team have visualized the atomic structure of Cascade, a large multi-protein complex that binds to a DNA target. Cascade is a key element of the CRISPR system of bacterial immunity. CRISPR is an acronym for Clustered Regularly Interspaced Short Palindromic Repeats.

The breakthrough by Bailey's team allowed for a better understanding of the bacterial immune response and how it acts as a barrier to the transfer of genetic information that promotes virulence and antibiotic resistance among bacterial cells. This new insight about how CRISPR functions sets the stage for the development of new drugs to prevent antibiotic resistance. This is important because more bacterial infections are becoming immune to existing antibiotics, leading to a major public health crisis.

Also, because the CRISPR system has been isolated and adapted for genome editing in a wide variety of species, including humans, the team's new findings have implications for emerging techniques used to correct genetic defects responsible for a broad array of diseases.

Bailey said the CRISPR research is "a good poster child for basic research. It started with people looking at yogurt, trying to make yogurt more cost-effective, and all of a sudden we've got something that may be a cure for genetic disease."

In a joint announcement to the university community today, Daniels and Lieberman said, "It is deeply gratifying to see our faculty move their innovative work forward with the support of the President's Frontier Award program as well as with the Discovery and Catalyst Awards. We look forward to all that lies ahead for Scott, for our finalists and, indeed, for the community of remarkable scholars of which they are a part."