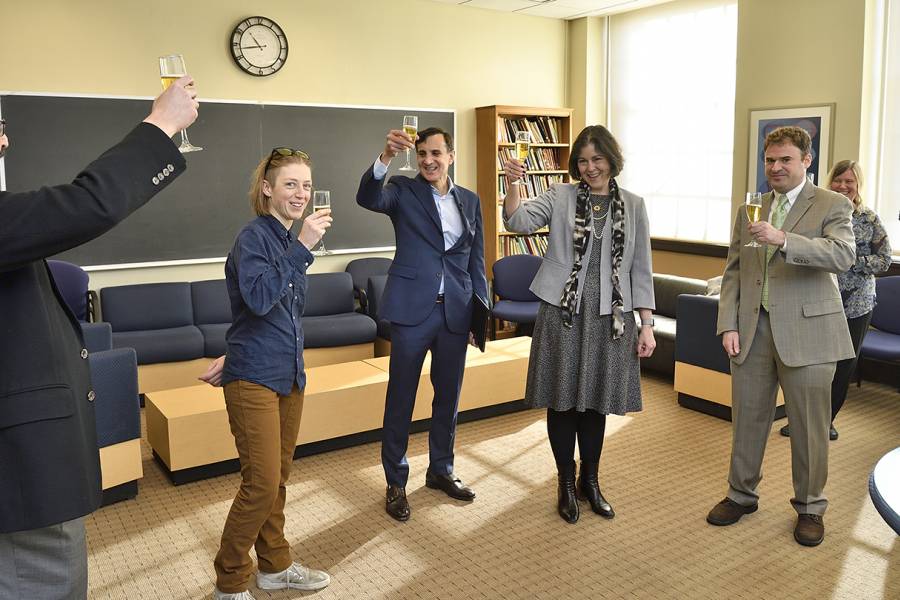 The $250,000 award supports individuals at Johns Hopkins who are breaking new ground and poised to become leaders in their field

Emily Riehl's area of study, category theory, is said to be "taking the mathematical field by storm," in the words of her colleagues. But it's not the popularity of the approach that attracted her to it.

"I just thought the proofs were the most beautiful of any of the other areas I've encountered," she says. "It was sort of love at first sight and I am lucky to be able to do what I love."

Today Riehl, an associate professor in the Krieger School of Arts and Sciences, received a $250,000 investment in doing more of what she loves. She is the sixth faculty member to receive the President's Frontier Award, which was founded to nurture individuals at Johns Hopkins University who are breaking new ground and poised to become leaders in their field.

When Riehl arrived at what she thought was a meeting with a department administrator, she says it was "a complete shock" to find JHU President Ronald J. Daniels, Provost Sunil Kumar, other university leaders, and many colleagues poised to surprise her. Daniels joked that the award was a fitting going away present as she prepares to spend the spring semester at the Mathematical Sciences Research Institute in Berkeley, California.

The award is meant to grant "freedom, the space to think, to create, and in truth just to do more of the things you have been doing in such a dramatic way," Daniels said.

In his letter of support of her nomination, David Savitt, chair of the Department of Mathematics, called Riehl a force of nature for her ability to attract visitors and postdocs, offer sought-after seminars and graduate classes, and pursue a formidable research program all at once.

"Category theory, the area of Professor Riehl's work, has been described as the mathematics of mathematics," Savitt wrote. "It is a ubiquitous phenomenon that similar mathematical concepts or arguments arise in diverse guises in very different areas of mathematics. Category theory provides a framework in which outwardly different ideas can be viewed as examples of a single, more general concept, which can then be specialized to new contexts to obtain fresh insight."

Riehl says category theory is "a metamathematical language that allows you to prove very general theorems that are kind of independent of the specific context. My work is helpful for other mathematicians to refine their thoughts and generalize their arguments." 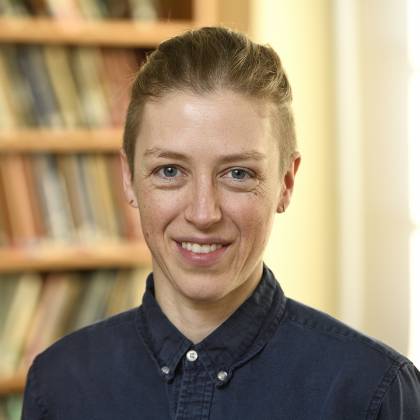 Riehl received her PhD in 2011 from the University of Chicago and spent four years as an NSF and Benjamin Peirce Postdoctoral Fellow at Harvard University before joining JHU in 2015. She was promoted to associate professor in 2019. She has been recognized through prestigious awards, residencies, and invited lectures; mentored several graduate students and postdocs; and won awards for her undergraduate teaching.

Riehl has published more than two dozen journal articles and three books, including an introductory book on category theory and a book that prepares graduate students for research.

In a nomination letter, W. Stephen Wilson, professor of mathematics, said, "junior faculty in mathematics DO NOT WRITE BOOKS. Emily is exceptional. Her books make getting into the field to do research possible without the great pain usually associated with that transition."

Wilson said Riehl is now writing another book with longtime collaborator Dominic Verity, a professor in the department of computing at Macquarie University in Sydney, that will "rewrite the whole area of research and give it order, cleaning up thousands of pages of published papers in the literature."

Riehl says her dream has been to finish that book in 2020 and "now I think it's going to be possible." She also said she is planning to start new projects. "I'd love to hire some of my collaborators to come back to Johns Hopkins with me," she said.

Beverly Wendland, dean of the Krieger School of Arts and Sciences, praised the way Riehl makes connections within her department, for undergraduate and graduate students, and in the wider math community.

Wendland thanked Riehl "for all of the manifold things that you do that make math an accessible discipline for so many people and the inclusiveness that you represent for women and for all comers to feel welcome as part of the community of math. You really bring so much to our school and beyond."

The expansion of the Frontier Award, originally a five-year program, is supported by a donation from the chair of the board of trustees, Louis J. Forster, A&S '82, SAIS '83. Nominations are submitted from across the academic divisions, and the awards committee, led by Denis Wirtz, vice provost for research, selects the finalists to submit to the president and provost.

Two other finalists are being recognized with $50,000 presidential awards. They are Gül Dölen, assistant professor of neuroscience in the School of Medicine, and Roland Thorpe Jr., associate professor of health, behavior, and society in the Bloomberg School of Public Health. 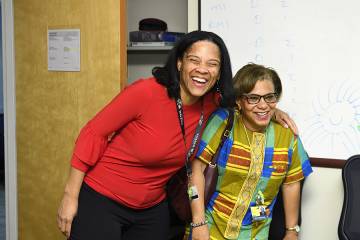 Published Sept 25, 2019
The university's President's Frontier Award program, which recognizes one faculty scholar each year with $250,000 in flexible funding, has been extended through 2024