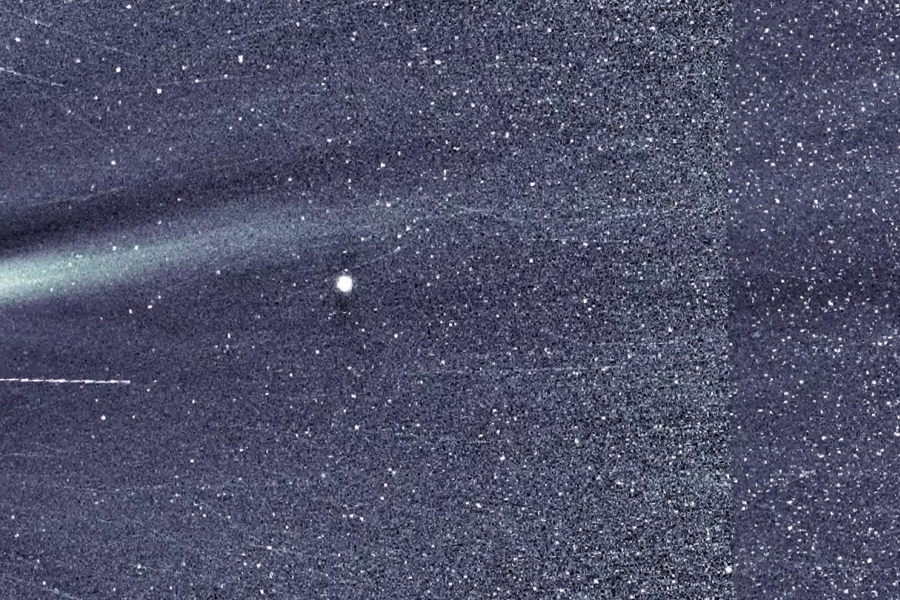 Behind howls of solar wind, quiet chirps reveal its origins

Scientists have studied the solar wind (pictured) for more than 60 years, but they're still puzzled over some of its behaviors. The small chirps, squeaks, and rustles recorded by the Parker Solar Probe hint at the origin of this mysterious and ever-present wind.

There's a wind that emanates from the sun, and it blows not like a soft whistle but like a hurricane's scream.

Made of electrons, protons, and heavier ions, the solar wind courses through the solar system at roughly 1 million miles per hour, barreling over everything in its path. Yet through the wind's roar, NASA's Parker Solar Probe can hear small chirps, squeaks, and rustles that hint at the origins of this mysterious and ever-present wind. Now, the team at the Johns Hopkins Applied Physics Laboratory, which designed, built, and manages the Parker Solar Probe for NASA, is getting their first chance to hear those sounds, too.

"We are looking at the young solar wind being born around the sun," says Nour Raouafi, mission project scientist for the Parker Solar Probe. "And it's completely different from what we see here near Earth."

Scientists have studied the solar wind for more than 60 years, but they're still puzzled over many of its behaviors. For example, while they know it comes from the sun's million-degree outer atmosphere called the corona, the solar wind doesn't slow down as it leaves the sun—it speeds up, and it has a sort of internal heater that keeps it from cooling as it zips through space. With growing concern about the solar wind's ability to interfere with GPS satellites and disrupt power grids on Earth, it's imperative to better understand it.

Just 17 months since the probe's launch and after three orbits around the sun, Parker Solar Probe has not disappointed in its mission.

"We expected to make big discoveries because we're going into uncharted territory," Raouafi says. "What we're actually seeing is beyond anything anybody imagined."

Researchers suspected that plasma waves within the solar wind could be responsible for some of the wind's odd characteristics. Just as fluctuations in air pressure cause winds that force rolling waves on the ocean, fluctuations in electric and magnetic fields can cause waves that roll through clouds of electrons, protons, and other charged particles that make up the plasma racing away from the sun. Particles can ride these plasma waves much like the way a surfer rides an ocean wave, propelling them to higher speeds.

"Plasma waves certainly play a part in heating and accelerating the particles," Raouafi says. Scientists just don't know how much of a part. That's where Parker Solar Probe comes in.

The spacecraft's FIELDS instrument can eavesdrop on the electric and magnetic fluctuations caused by plasma waves. It can also "hear" when the waves and particles interact with one another, recording frequency and amplitude information about these plasma waves that scientists can then play as sound waves. And it results in some striking sounds.

Take, for example, whistler-mode waves. These are caused by energetic electrons bursting out of the sun's corona. These electrons follow magnetic field lines that stretch away from the sun out into the solar system's farthest edge, spinning around them like they're riding a carousel. When a plasma wave's frequency matches how frequently those electrons are spin, they amplify one another. And it sounds like a scene out of "Star Wars."

"Some theories suggest that part of the solar wind's acceleration is due to these escaping electrons," says David Malaspina, a member of the FIELDS team and an assistant professor at the University of Colorado, Boulder, and the Laboratory for Atmospheric and Space Physics. He adds that the electrons could also be a critical clue to understanding one process that heats the solar wind.

"We can use observations of these waves to work our way backward and probe the source of these electrons in the corona," Malaspina says.

Another example are dispersive waves, which quickly shift from one frequency to another as they move through the solar wind. These shifts create a sort of "chirp" that sounds like wind rushing over a microphone. They're rare near the Earth, so researchers believed they were unimportant. But closer to the sun, scientists discovered, these waves are everywhere.

"Nobody knows what causes these chirping waves or what they do to heat and accelerate the solar wind. That's what we're going to be determining. I think it's incredibly exciting."
David Malaspina
FIELDS team member

"These waves haven't been detected in the solar wind before, at least not in any large numbers," Malaspina explains. "Nobody knows what causes these chirping waves or what they do to heat and accelerate the solar wind. That's what we're going to be determining. I think it's incredibly exciting."

Raouafi commented that seeing all of this wave activity very close to the sun is why this mission is so critical. "We are seeing new, early behaviors of solar plasma we couldn't observe here at Earth, and we're seeing that the energy carried by the waves is being dissipated somewhere along the way, to heat and accelerate the plasma."

But it wasn't just plasma waves that Parker Solar Probe heard. While barreling through a cloud of microscopic dust, the spacecraft's instruments also captured a sound resembling old TV static. That static-like sound is actually hundreds of microscopic impacts happening every day: dust from asteroids torn apart by the sun's gravity and heat and particles stripped away from comets strike the spacecraft at speeds close to a quarter of a million miles per hour. As Parker Solar Probe cruises through this dust cloud, the spacecraft doesn't just crash into these particles—it obliterates them. Each grain's atoms burst apart into electrons, protons, and other ions in a mini puff of plasma that the FIELDS instrument can "hear."

Each collision, however, also chips away a tiny bit of the spacecraft.

"It was well understood that this would happen," Malaspina says. "What was not understood was how much dust was going to be there."

APL engineers used models and remote observations to estimate how bad the dust situation might be well before the spacecraft launched. But in this uncharted territory, the number was bound to have some margin of error.

James Kinnison, the Parker Solar Probe mission system engineer at APL, says this discrepancy in dust density is just one more reason why the probe's proximity to the sun is so useful.

"We protected almost everything from the dust," Kinnison says. And although the dust is denser than expected, nothing right now points to dust impacts being a concern for the mission, he adds.

Parker Solar Probe is scheduled to make another 21 orbits around the sun, using five flybys of Venus to propel itself increasingly closer to the star. Researchers will have the opportunity to better understand how these plasma waves change their behavior and to build a more complete evolutionary picture of the solar wind. 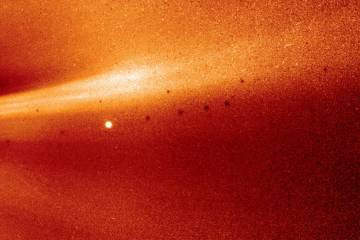 Published Dec 5, 2019
After completing three of 24 passes around the sun, the Parker Solar Probe shares data that adds to our understanding of space phenomena