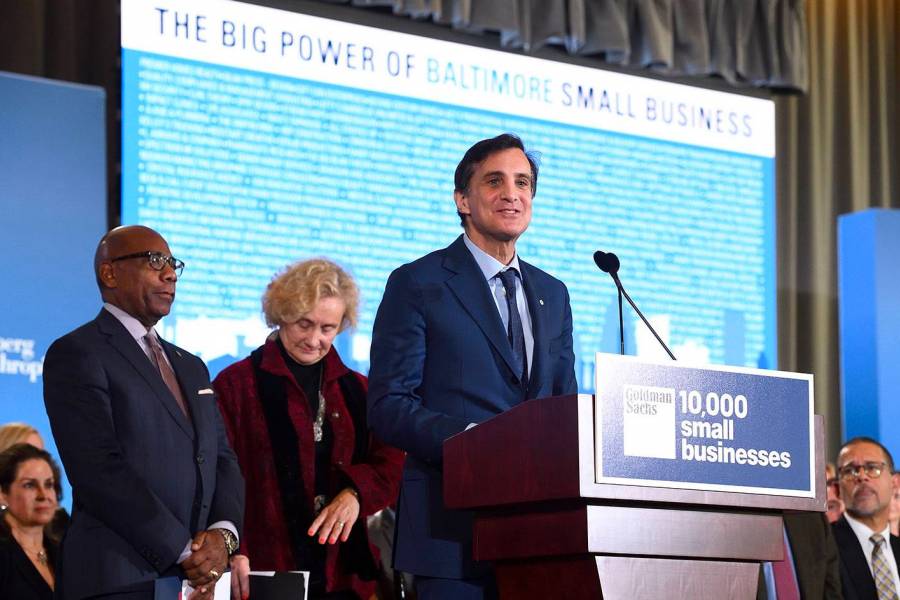 The university's board of trustees votes unanimously to add a new five-year term to Daniels' presidency, a renewal that will make him the second longest-serving president in the university's history

Johns Hopkins University's board of trustees has voted unanimously to add a new five-year term to the presidential tenure of Ron Daniels, an extension through June 2029 that "reflects the board's full and unwavering confidence in the trajectory of our institution and its remarkable people—our students, faculty, staff, alumni, and friends—supported and sustained by President Daniels' able leadership," Lou Forster, the board's chair, wrote in a message to the Hopkins community today.

"Over the last 12 years, Ron has led our University with his signature dynamism, imagination and intellect," Forster wrote. "In his inaugural address, and later in the Ten by Twenty—Johns Hopkins' strategic plan—Ron charted several key priorities for the University: to foster the excellence of our faculty, staff and students; to increase accessibility for talented students from all backgrounds; to nurture collaboration in teaching, research and service across the University's divisions as One University; and to deepen community engagement.

"There is little doubt that in these priorities, the university has made great strides forward over the past decade."

The new term, at its conclusion, will make Daniels—who became JHU's 14th president in March 2009—the second longest-tenured president in the university's history, surpassed only by the first president, Daniel Coit Gilman, who served from 1875 through 1901. Daniels' current contract runs through June 2024.

"We are enormously fortunate to have a president who brings principles, determination, collegiality and vision in building on the institution's successes over the past decade and prior long history of accomplishments. We eagerly look forward to the next decade, to our 150th anniversary, and to the many achievements yet to come."
Lou Forster
Chair, JHU Board of Trustees

"Johns Hopkins has set the standard for global research universities from its founding to the present, and once again during this historic time. I have been so fortunate to lead this remarkable institution and am humbled to continue to do so as we approach our 150th anniversary," Daniels said in a statement. "It is a privilege to work alongside our exceptional faculty, students, staff and alumni to advance our mission of discovery, welcome extraordinary students and scholars from all walks of life, and devote ourselves to the success of city we call home."

The university has also made unprecedented investments in its faculty over the past decade, including the Bloomberg Distinguished Professors program, which has resulted in the recruitment or promotion of 50 leading interdisciplinary scholars, and the Catalyst and Discovery Awards, which have supported the research of nearly 800 faculty members since their inception in 2015.

During Daniels' presidency, the university has created 320 new endowed professorships, an 89% increase, and its overall endowment has grown from just under $2 billion to $8.8 billion.

"President Daniels has brought significant innovation to the university, and I am thrilled that he will lead JHU through 2029," said Elizabeth M. Jaffee, the Dana and Albert "Cubby" Broccoli Professor of Oncology and deputy director of the Sidney Kimmel Comprehensive Cancer Center at Johns Hopkins. "His vision has led to new ways for Hopkins students and faculty to move Hopkins-based discoveries into intellectual property and new company formation. He has helped revitalize the undergraduate campus that has brought JHU into the top 10 undergraduate universities in the nation, led the reinvigoration of the historic theater district in Baltimore, and launched programs to encourage local Baltimore City businesses. Personally, I have greatly appreciated President Daniels' exploration of and support for new initiatives in cancer research like the Cancer Convergence Institute, and I know he has had the same impact in disciplines across the university."

Other signature achievements of Daniels' tenure include:

Throughout his presidency, Daniels has made clear Johns Hopkins' steadfast commitment to the success and well-being of Baltimore and its citizens, deepening the institution's relationships across the city and supporting economic and educational opportunity by expanding collaborations with city schools; establishing the Henderson Hopkins School in East Baltimore; launching the HopkinsLocal economic inclusion program; investing in communities through the Homewood Community Partners Initiative (HCPI), the East Baltimore Development Inc. (EBDI) initiative, and the reinvigoration of the Station North Arts and Entertainment District in Central Baltimore; and helping to cultivate an innovation ecosystem to bring startup companies and jobs to the city.

"Ron has always been a steadfast advocate for Baltimore, and I am pleased he will continue to lead Hopkins," Baltimore Mayor Brandon Scott said. "As president of Hopkins, he never hesitated to leverage university resources or rally area leaders to address Baltimore's most pressing challenges. Ron is committed to building a better Baltimore, and I look forward to continuing our work to achieve this endeavor."

Forster wrote that in extending Daniels' term, the board is fulfilling its responsibility "to chart a path for the next decade and beyond with the same ambition and ingenuity as the last. In fulfillment of this pursuit, the entire Board of Trustees and I applaud Ron and his leadership. We are enormously fortunate to have a president who brings principles, determination, collegiality and vision in building on the institution's successes over the past decade and prior long history of accomplishments. We eagerly look forward to the next decade, to our 150th anniversary, and to the many achievements yet to come."