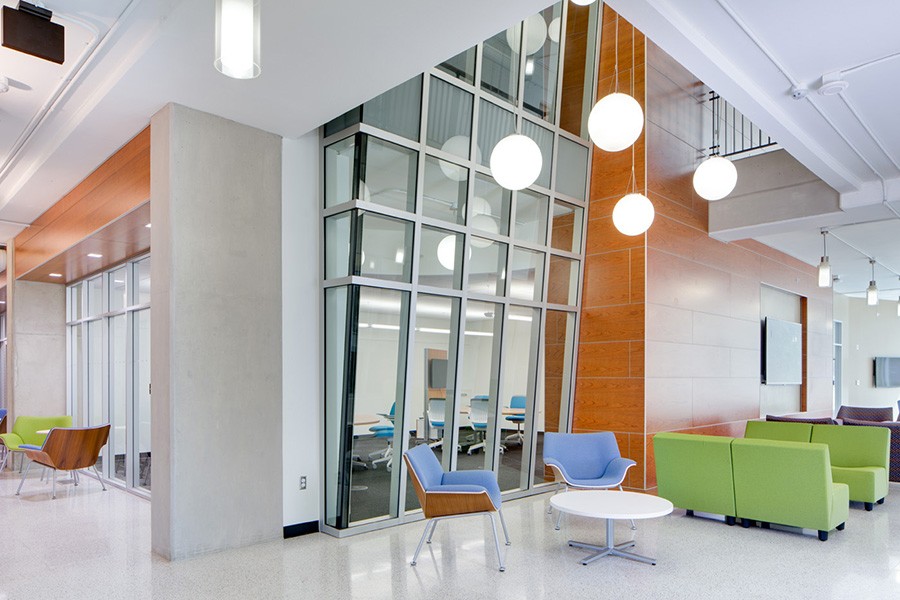 The scientific activity inside Malone Hall, the latest physical addition to the Homewood campus, promises to be staggering in both scale and scope.

Within the building's gleaming walls, Johns Hopkins faculty and students will endeavor to: enhance understanding of how human genes cause disease, protect the Earth from an asteroid collision, safeguard and systematize sensitive health records, and design computer systems that approach human intelligence to answer questions beyond our current capability.

To achieve such grand ambitions will require not only ample brainpower but a lot more "eye contact" with colleagues, says Gregory Hager, chair of the Whiting School's Department of Computer Science. And Malone Hall, Hager says, will provide plenty of opportunity to see and be seen.

For the first time in the department's history, much of Computer Science and some affiliated research institutes will reside under one roof, ushering in what Hager and other Whiting School of Engineering leadership hope will be an unprecedented era of networking and interdisciplinary collaboration.

"Malone Hall not only brings us together, it's intentionally designed to let us work much more closely and help us define the department's mission in a more effective way," Hager says. "This gorgeous new structure is first and foremost about the people inside."

The 69,000-square-foot, four-story building sits between Mason and Hackerman halls on the Alonzo G. and Virginia G. Decker Quadrangle. Facing the quad, Malone resembles its neighbors with its Georgian-themed architecture of red brick, white marble trim, and dormer windows. The building's opposite exterior has a decidedly more modern look, with a convex glass facade that offers views of the woods behind the Baltimore Museum of Art.

The interior of the building is sleek, bright, and open, with abundant use of glass doors and polished surfaces set against cherry-wood hallway walls. The second and third floors feature large, glass-sheathed collaborative spaces outfitted with flat-screen monitors for displaying presentations and for videoconferencing. Large and small conference rooms are scattered throughout the building. While there are no classrooms, the building has several computer labs where undergraduates can work on group projects.

Ed Schlesinger, the Benjamin T. Rome Dean of the Whiting School of Engineering, says that Malone Hall will be about making connections.

"It's a remarkable building. The design is outstanding—how it blends in with the beautiful Homewood campus so seamlessly on the quad side but on the back has very modern elements," Schlesinger says. "Inside, the large number of interaction spaces will facilitate bringing people together in the most effective ways to encourage the type of interdisciplinary work we want to do here. We'll have engineers and scientists from many disciplines working side by side as they attempt to solve vexing problems and forge new areas of work."

The building was made possible by a $30 million gift to the Whiting School of Engineering given in 2010 by alumnus and cable mogul John C. Malone, who received his master's degree in 1964 and his doctorate in 1969 from Johns Hopkins and is now chairman of Liberty Media Corp. and Liberty Global Inc.

"John Malone is one of our most successful alums, and his investment in the school is a vote of confidence in what we can achieve," Schlesinger says. "He has an interest in an engineering systems approach to problem solving that this kind of space will encourage."

In addition to Computer Science faculty, Malone Hall houses the Hopkins Extreme Materials Institute, which will occupy nearly one-third of the building. HEMI was created to spearhead a national effort to equip the U.S. Department of Defense with lighter, more protective armor. The institute, headed by K.T. Ramesh, a professor of mechanical engineering who holds the Alonzo G. Decker Jr. Chair in Science and Engineering, brings together government, academic, and industrial partners to create high-tech protective materials by studying what happens to materials under extreme events, be they conditions of high pressure, impact, energy, temperature, velocity, or other.

For example, HEMI will look at the moment of impact of an asteroid hitting the Earth by scaling down the event to an observable—and safe—size inside the building's laser shock facility. High-energy beams will be shot into materials, such as aluminum sheets, to replicate the energy forces of a meteor impact, while special cameras will record that action at a rate of 200 million pictures per second. HEMI scientists also will construct miniature meteors with 3D printers to determine what forces would be necessary to deflect the object's trajectory without it breaking up. "The question is, how strong is an asteroid? Is it strong enough that you can push it out of the way, either by nuclear blast or gravity pull, if it's on a collision course with Earth? That is one of the things we're looking at," Ramesh says.

In the hypervelocity impact facility, a high-powered gas gun will shoot projectiles toward targets at the rate of up to a kilometer per second to test the effectiveness, for example, of protective materials such as vests and glass.

The drop tower room features a device that can literally drop weights onto objects to measure acceleration and impact. Through such experiments, HEMI staff can determine what protective forces would be required to mitigate traumatic brain injuries.

For all its projects, HEMI will need expertise from various fields, Ramesh says.

"We are an organization that tries to pull together teams of people to solve really complicated problems. How do you get those people to come together? One way is they need to be excited about the problem and want to work with you to solve it. We spent considerable time and money to structure this building so that it's easy to work together, whether it's someone from down the hall or a colleague at Caltech who has some expertise that we need."

Malone Hall also will be the Homewood campus hub for the university's Individualized Health Initiative, an effort that brings together researchers from the schools of Engineering, Medicine, Nursing, and Public Health to develop the most effective medical treatments for individual patients.

Another of the building's tenants is the Johns Hopkins University Information Security Institute, formed to address the major security and privacy issues that face the scientific, business, legal, and government realms. The institute's two signature research endeavors are the application of information security in the health care field and the use of applied cryptography to strengthen systems and reduce the chances of a breach.

"We had previously been in one of the older buildings on campus, spread out over different floors. Now we're all integrated together. This could lead to tremendous collaborative opportunities within our faculty and staff," Dahbura says. "It's a sea change really. This could change everything we do, so we have a deep appreciation to John Malone for making this possible."