Historic gift is the largest ever to a U.S. college or university 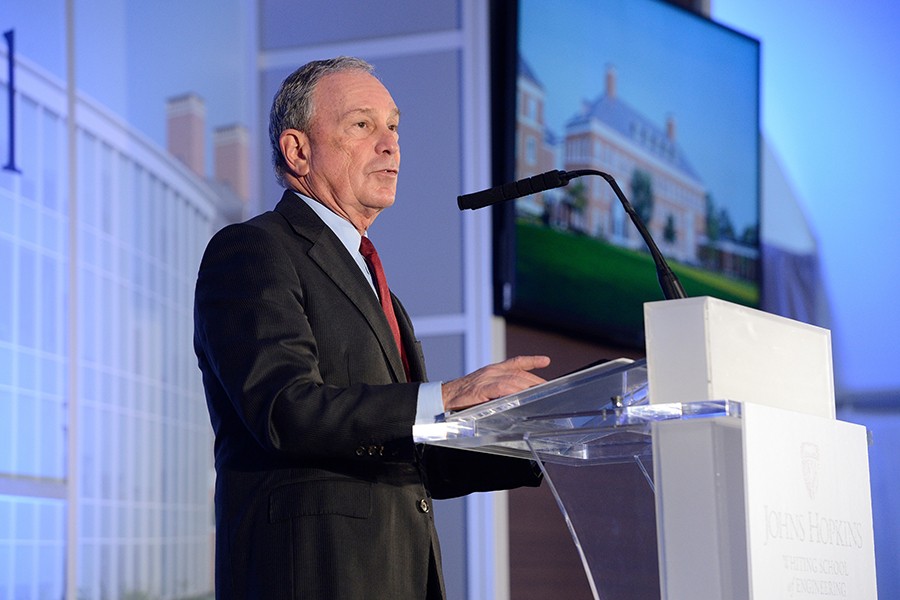 "This historic gift reflects Mike Bloomberg's deep belief in the transformative power of higher education and his insistence that it be accessible to all qualified students, regardless of financial means," Johns Hopkins University President Ronald J. Daniels wrote in a message to the university community today. "It also affirms Mike's profound devotion to this university for the role that it played in enriching his life."

Bloomberg, a 1964 Johns Hopkins graduate, announced his historic gift in a New York Times op-ed in which he identified college affordability as a national challenge.

"America is at its best when we reward people based on the quality of their work, not the size of their pocketbook," Bloomberg said. "Denying students entry to a college based on their ability to pay undermines equal opportunity. It perpetuates intergenerational poverty. And it strikes at the heart of the American dream: the idea that every person, from every community, has the chance to rise based on merit."

For more on Bloomberg's gift, read the full text of Daniels' message to the community below.

When we gather with family or friends to celebrate Thanksgiving later this week, many of us will begin the holiday meal by expressing our gratitude for the blessings we have received.

Today, we are grateful and humbled for one more, extraordinary blessing.

Michael R. Bloomberg, graduate of the Class of 1964 and former chair of our board of trustees, has made a gift to us that is staggering in its vision and breathtaking in its impact: $1.8 billion to dramatically and permanently expand undergraduate financial aid at Johns Hopkins University.

This historic gift reflects Mike Bloomberg's deep belief in the transformative power of higher education and his insistence that it be accessible to all qualified students, regardless of financial means. It also affirms Mike's profound devotion to this university for the role that it played in enriching his life.

This belief in the role of higher education was central to the monumental gift we received at our founding. Johns Hopkins' $7 million gift in 1873 was heralded by the New-York Tribune as "one of the grandest bequests ever made to any city." In its day, Mr. Hopkins' philanthropy was the largest ever given to a university and a hospital. It reverberated around the nation and launched America's first research university on a path toward seminal achievements in virtually every sphere of scholarly endeavor.

Though he did not provide detailed instructions for the university he dreamed into being, Mr. Hopkins envisioned that it was to be an institution open to students not on the basis of their financial wherewithal but on "their character and intellectual promise."

We have long sought to honor this directive, and we have been supported by a legion of committed donors. But we have never been fully able to realize the inspiring vision of a university that is open to, and supportive of, all high-achieving students regardless of their means or backgrounds. Our dedicated financial aid endowment was simply too small. Now, as a consequence of Mike Bloomberg's extraordinary gift, we will be fully and permanently need-blind in our admissions and be able to substantially enrich the level of direct assistance we provide to our undergraduate students and their families.

Beginning in the fall of 2019, Johns Hopkins will be a loan-free institution. We will replace all undergraduate student loans with scholarships, and we will reduce overall family contributions to financial aid. In addition, for the spring 2019 semester, we will offer immediate loan relief to every enrolled undergraduate student whose financial aid package includes a federal need-based loan.

Coupled with expanded recruitment and post-enrollment support programs, these new financial aid offerings will ensure that we are able to recruit more first-generation and low-income students and provide them with full access to every dimension of the Johns Hopkins experience. Our goal is to attract and support a student body in which at least 20 percent of our students are eligible for federal Pell grants by 2023.

With this gift, Mike Bloomberg's combined philanthropy to Johns Hopkins exceeds $3.35 billion. This constitutes the largest philanthropic investment ever made to any institution of higher education in the United States. In this, his unparalleled generosity echoes and honors the example forged by Johns Hopkins almost 150 years ago.

On behalf of the entire Johns Hopkins community, I express our heartfelt gratitude and appreciation to Mike Bloomberg, and reaffirm our sincere determination, in word and in deed, to vindicate the very substantial trust he has reposed in us.

I can think of no better way to begin this holiday season. We are profoundly grateful. We are truly blessed.