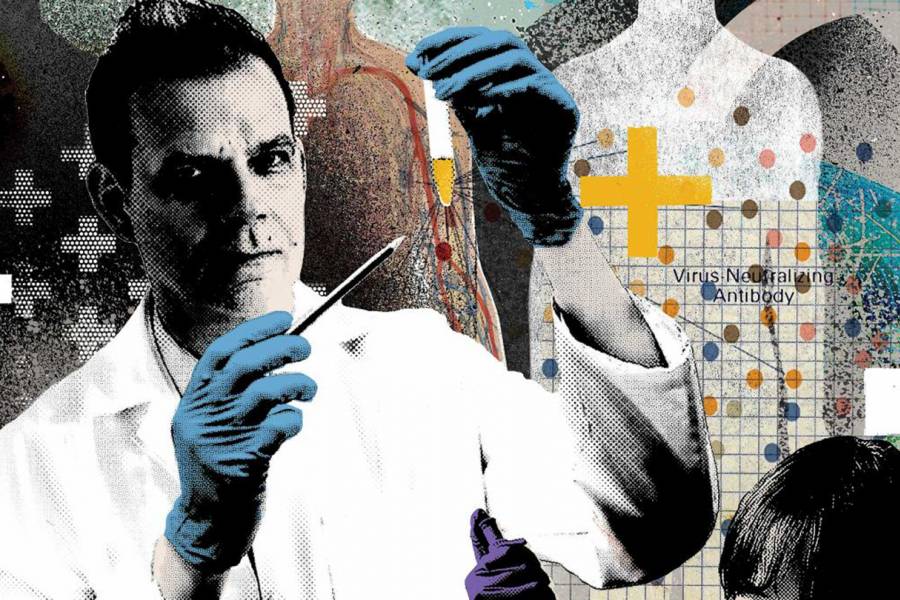 An old-school approach offers a fast, stopgap solution for a modern pandemic

In January 1934, J. Roswell Gallagher faced a major problem. The staff physician at a boys' boarding school outside Philadelphia learned that one pupil, identified as C. Y., had been exposed to measles. While confined to the school's infirmary, C. Y. exposed two other boys. Fearing a measles outbreak, Gallagher took decisive action. He collected blood from C. Y., purified the plasma that was rich in antibodies against the measles virus, and administered it to 62 other students. Three developed mild symptoms, but no one else got sick.

To modern eyes, Gallagher's actions may seem reckless, even foolhardy. At the time, however, use of this convalescent plasma was standard medical practice. Until the age of antibiotics at the end of World War II, antiserum (as it was then called) was used to treat and prevent everything from influenza to smallpox. As the world faced an emerging pandemic coronavirus that has no effective treatments or vaccines, Arturo Casadevall, remembered J. Roswell Gallagher's gambit and decided his strategy deserved another chance. He floated the idea in a Wall Street Journal op-ed in late February.

Since then, the chair of Molecular Microbiology and Immunology at the Bloomberg School of Public Health has worked 18-hour days with a cross-country network of colleagues to treat more than 20,000 hospitalized U.S. COVID-19 patients with convalescent plasma. The National COVID-19 Convalescent Plasma Project, a group chaired by Casadevall, has become a national movement that has rapidly deployed plasma use across the U.S. If Casadevall has his way, the convalescent plasma effort will not only remind the world of a near-forgotten therapy but also demonstrate the power of scientists teaming up to tackle one of humanity's greatest threats.

Before the antiviral drug cocktails that gave HIV patients a chance at life, before the polio vaccine made summer and swimming pools once again safe for children, and before Alexander Fleming discovered the Penicillium mold growing on a pile of unwashed petri dishes, microbiologists created one of the world's first "miracle drugs" from a very different source. Beginning in the late 1800s, German and Japanese scientists found that when they injected horses, goats, and other barnyard residents with toxins produced by the bacteria that caused diphtheria and tetanus, the resulting antibody-rich antiserum could be purified and used to treat or prevent a range of infectious diseases. Although the antibodies (immune proteins that neutralize pathogens) provided only temporary protection, the work was so lifesaving and revolutionary that one of its creators, Emil von Behring, received the first-ever Nobel Prize for Medicine in 1901. (The work of his collaborator, Japanese scientist Kitasato Shibasaburō, was not formally recognized until recently.)

Soon, scientists were discovering and using antiserum with an almost Oprah-like enthusiasm: You get antiserum! You get antiserum! Everybody gets antiserum! That everything would look like a nail when microbiologists first discovered a hammer was understandable, Casadevall says, especially when infectious diseases killed so many and were unstoppable by any other method. But antiserum worked, and it often worked quickly. What's more, it was generally safe, especially compared to ingredients of other so-called therapies, such as arsenic and radium. It was also readily available.

"As soon as you have survivors, you have convalescent plasma," Casadevall says.

The development of antibiotics largely made convalescent plasma obsolete, but when new infectious diseases popped up that no one could treat, the treatment was dusted off and hauled out. Desperate physicians used the plasma to treat Ebola, SARS, and MERS, and a variety of anecdotes showed both safety and efficacy. So when COVID-19 came knocking, Casadevall knew immediately that the strategy would be worth trying—and testing. (In fact, researchers in China had begun piloting use of convalescent plasma in patients in late January.) 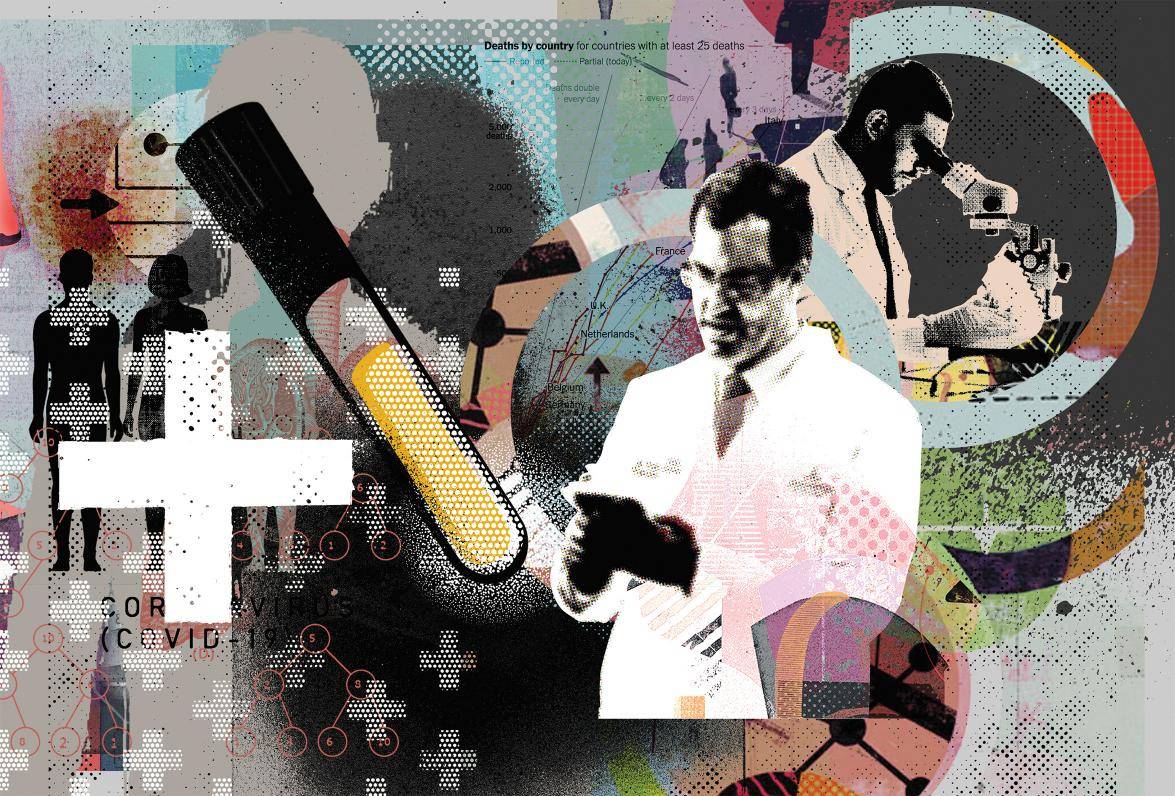 That he would spearhead such an initiative came as no surprise to MMI colleague David Sullivan, or to the Mayo Clinic's Michael Joyner. Both scientists say that the combination of his critical thinking skills, intense desire to alleviate human suffering, and can-do attitude made Casadevall the perfect person to launch the project.

For the last decade, Casadevall, Joyner, and a small cadre of like-minded colleagues had been pushing for the U.S. to spend more money on broad, one-size-fits-all public health measures rather than investing so much in personalized medicine. Convalescent plasma fit right in with this ethos. It was cheap and low tech, and it didn't require months of innovation that the world simply didn't have. When Joyner first read Casadevall's Wall Street Journal piece, he had to confess that he hadn't read anything about convalescent plasma since medical school. But years of working with Casadevall told him that his friend was onto something, and Joyner wanted to help.

"One bright spot in this whole pandemic is being able to go from these casual conversations about have you seen this paper to really working with Arturo to help solve this problem," Joyner says.

After Joyner forwarded Casadevall's op-ed to fellow physicians at Mayo, hundreds of doctors inundated Casadevall with requests for plasma. But he had a major problem: "When we first started thinking about this, there was no infrastructure. We had no testing and few survivors," Casadevall says.

Others recognized these shortfalls, and within days, Casadevall received a $3 million grant from Bloomberg Philanthropies and $1 million from the state of Maryland to investigate convalescent plasma. Casadevall also paired up with Liise-anne Pirofski from Albert Einstein College of Medicine to write a more formal, peer-reviewed article on the topic for the Journal of Clinical Investigation, which was published on March 13.

"I don't think anyone thought this [treatment] would get so big, so quickly. This whole thing is just wild."
Michael Joyner
Mayo Clinic

Closer to home, physicians and scientists at the Bloomberg School and Johns Hopkins School of Medicine began assembling a team to set up clinical trials. Infectious disease physician Shmuel Shoham knew of a protocol to administer the plasma; Aaron Tobian and Evan Bloch came on board to lead the plasma collection and transfusion efforts. Others, including Sullivan and MMI Professor Sabra Klein volunteered their expertise in data management, statistical analysis, and other aspects of clinical trial design.

"That's the great thing about Hopkins—no matter what you want to do, there's always a network of people to help," Shoham says.

By mid-March, a national team led by Joyner and Michigan State University epidemiologist Nigel Paneth had assembled around Casadevall and dubbed itself the COVID-19 Convalescent Plasma Project. They wrote up a guidebook for plasma therapy that they published in JCI. Once the FDA granted an Emergency Use Authorization for the convalescent plasma on Friday, March 24, they could start moving forward. The following Monday, the first patients received convalescent plasma therapy in an ICU at Methodist Hospital in Houston, Texas. Less than two months later, more than 10,000 people had been treated.

"I don't think anyone thought this would get so big, so quickly," Joyner says. "This whole thing is just wild."

But Casadevall knew that convalescent plasma, like any therapy, was less likely to be successful in the sickest patients. At that stage of illness, early reports from China showed that much of the physical damage was caused by the immune system itself, not the virus, something that convalescent plasma can't reverse. While he believed the plasma could help—the scientific literature had more than a few near-miraculous deathbed recoveries from the treatment—he knew that the therapy's promise lay more in its ability to prevent the onset of severe illness or to prevent symptoms completely than as a cure for advanced disease.

The problem was where to get enough plasma for all the patients who needed it. Shoham knew the coronavirus had ravaged New York City's Orthodox Jewish community and reached out to a friend, Chaim Lebovits, to ask for help. The New York–based shoe salesman launched into action and rallied thousands of COVID-19 survivors to donate plasma around the metro area. Each donor could provide enough plasma to treat two patients. Rabbis allowed, even encouraged, the throngs of faithful to break the Sabbath if that was the only time they could donate. In just over a month, the country had enough convalescent plasma to treat more than 7,000 hospitalized COVID-19 patients.

The treatments, however, weren't part of a formal clinical trial. And the plural of anecdote isn't data, as Casadevall never tires of reminding people. Now the Plasma Project is working to test the approach in hundreds of highly exposed health care workers, to see if it will prevent them from getting sick (a project led by Shoham), and among hundreds more COVID-19 patients being treated at home to determine whether it might keep them from needing hospitalization (led by Sullivan). These parallel projects will provide solid answers about the value of convalescent plasma.

"This seems like it's our best hope before a vaccine, and it's something we can save lives with now," Sullivan says. He also hopes the project will provide scientists with a good benchmark about how the immune system protects people from COVID-19, a key piece of evidence when it comes to evaluating vaccines.

In the near future, Casadevall hopes that his old-school approach will act as a stopgap measure until a vaccine is ready. Longer-term, he says that he hopes that his work will reinvigorate convalescent plasma's use for other infectious diseases such as influenza and Ebola.

The work has proved so popular that the American Red Cross has begun testing all donated blood for SARS-CoV-2 antibodies. Blood that has high levels of SARS-CoV-2 antibodies will be shunted to coronavirus treatment. It's a testament to the value of Casadevall's idea that tens of thousands of people have already received convalescent plasma as the world's largest biotech companies (including, ironically, CSL Behring, named in honor of convalescent plasma's first proponent) scramble to find an effective therapy.

In this case, Casadevall's old-school approach may have gotten him across the finish line first. "This is a grassroots movement with no formal coordination. It's amazing to think we can go from idea to treating more than 20,000 patients in under three months," he says.

This article originally appeared in print as "The Natural Fix" in the COVID-19 Special Edition issue of Hopkins Bloomberg Public Health magazine. Subscribe for the latest news and insights from the Bloomberg School. 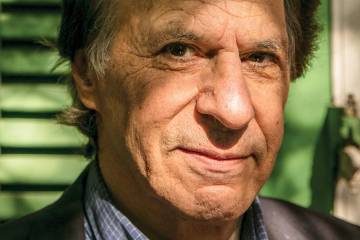 Peering into the pandemic future

Published July 27, 2020
Historian John M. Barry looks to the lessons of the 1918 flu pandemic for lessons on confronting COVID-19 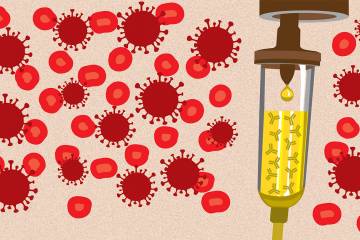