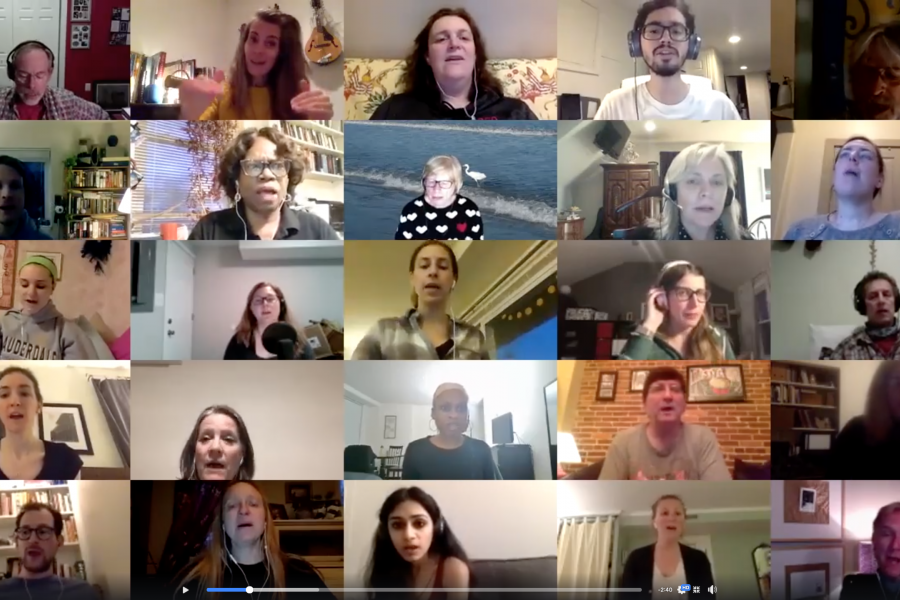 Sound in the silence

Every Wednesday night Kristen Toedtman reluctantly silences her singers. The COVID-19 outbreak forced the director of the Community Chorus of Peabody, an ensemble involving local residents of all ages and backgrounds, to move its weekly meetup online. Instead of gathering at the Henderson-Hopkins Elementary School to rehearse, now 30-40 people are congregating on Zoom to follow Toedtman's conducting as they sing in their own homes. While Zoom allows people to interact simultaneously on screen, there's still a bit of a time lag, and it's impossible for everybody to sing in unison and on beat. "It is the saddest thing for a choir director to click mute all," Toedtman says, "but that's what I have to do."

Toedtman, Peab '00 (MM), is a veteran vocalist, composer, and working musician familiar with remote rehearsing's imperfections. Not everything is muted. They gather with the sound on, are muted when she leads the chorus through warmup vocal exercises, and people can ask questions and discuss the pieces they're working on in chat or unmuting themselves. Current technology doesn't allow musicians to perform in unison when they're singing from their homes, so people sing by themselves and can harmonize with Toedtman. Timing can be practiced, but the power of an ensemble's group dynamic is missing. To show the group how they're doing, Toedtman had her singers record themselves during one rehearsal and later overlaid the audio tracks with the recorded Zoom call to create a #virtualchoir video she posted to the chorus's Facebook and Instagram pages.

We had fun singing "together" at last week's rehearsal. An inspiring song by @mamusemusic, We Shall Be Known. Full video on Facebook

A post shared by Community Chorus of Peabody (@communitychorusofpeabody) on Apr 1, 2020 at 8:36am PDT

"If we're all unmuted and everybody's singing with me, they're all going to be behind" the beat, Toedtman says. "We did try it as an experiment on our very first Wednesday Zoom, because it's just hilarious."

She's brought that playful enthusiasm to the chorus since she became director during the 2016–17 academic year, and she's marshaling that energy into adapting to the ensemble's weekly meetups. The pandemic canceled the chorus's scheduled performances through June, which included a spring recital and participating in All Together: A Global Ode to Joy with maestra Marin Alsop. All Together celebrates the 250th anniversary of Beethoven's birth with performances of his Ninth Symphony around the world, including the Baltimore Symphony Orchestra.

Weekly Zoom rehearsals have included a bit of work on the Beethoven, but Toedtman has also introduced new songs to the chorus, a way to keep people working on their instrument as a coach might have her athletes find ways to practice at home. "I've never really done virtual singing before," says Ariel Brown, who joined the chorus in fall 2019. She works at the Behavioral Health Administration of the Maryland Department of Health and used to sing in a gospel choir and a cappella groups growing up, but singing took a back seat during grad school and her stint in AmeriCorps. She found the chorus while seeking a way to get out of the rut of going to work and then coming home.

"Everyone really supports each other and gets along," Brown says. "It's nice to have a variety of voices coming together."

"It's something routine that I can depend on, and it gives a little bit of normalcy to a situation that's not normal. There's something very healing about that as well, even though we're not in the room together."
Ariel Brown
Community Chorus of Peabody

Initially, the virtual choir seemed to stifle such camaraderie. "I miss standing next to people in the room and being able to hear if I'm missing a note or something," Brown says. "But at the same time, it's really nice and therapeutic to go on Zoom, see familiar faces, and sing. It's something routine that I can depend on, and it gives a little bit of normalcy to a situation that's not normal. There's something very healing about that as well, even though we're not in the room together."

That sentiment is echoed by other chorus members. Mark Miller, co-director of the Joint High Performance Computing Exchange facility at the Johns Hopkins Bloomberg School of Public Health, has been with the chorus since its founding in 2014 and admits that singing alone with the computer at home is a little out of his comfort zone. "But because everyone is isolated, you may not have as many connections with communities as you had before," he says. The virtual choir "is a way to maintain that connection, so even just seeing everyone each week, that's a thrill."

Some of these songs, such as the folk duo MaMuse's "We Shall All Be Together" that appears in the #virtualchoir video, may end up as what Toedtman calls pocket songs. "They're songs we can sing and we can teach to other people easily," Toedtman says, explaining chorus members can proverbially keep such pieces in their pockets. "So if we're out and about somewhere, we can get the audience singing with us. We like to have a good handful of those every season."

Though the COVID-19 pandemic has prevented the chorus from slotting events into its calendar, Toedtman had previously been working toward collaborating with Baltimore Ceasefire, the grassroots organization co-started by Erricka Bridgeford to end murder in the city and honor those lost to homicide. The chorus sang at one of the Ceasefire celebrate life events in August 2018, and Toedtman hopes, in the future, to have some group of chorus members regularly attend and sing at Ceasefire's sacred space rituals where they honor the life lost in a specific space. "Getting involved is as simple as showing up to honor every site where someone is shot and have a vigil, honoring a sacred moment," she says. "We haven't been able to do that yet, but participating with the Baltimore community, that's a high priority for me." 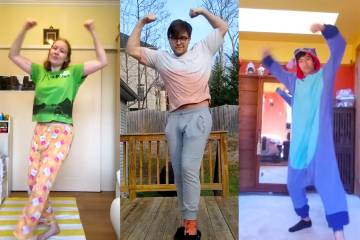 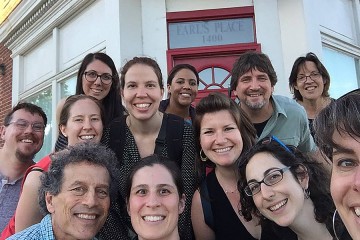 Published Sept 5, 2017
Missing a past choir experience—or want to try it for the first time? 'Open sings' start Sept. 6