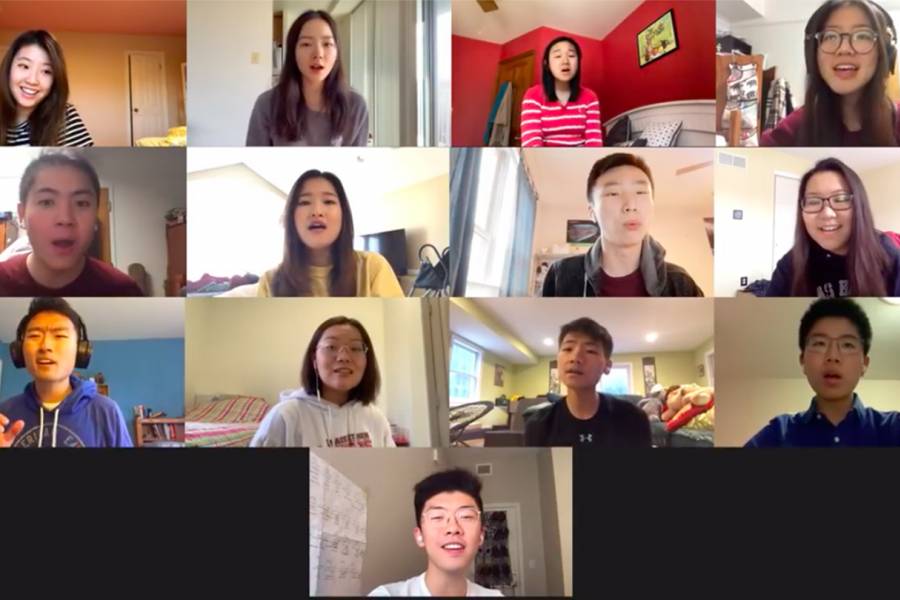 While video chat services can be useful for meetings or keeping in touch with friends, problems such as internet lag and low-quality microphones make them unusable for the Johns Hopkins student groups still hoping to perform together while social distancing.

Chinese a cappella group Music Dynasty landed on a solution: to create a musical collaboration, the group's members recorded their parts separately, then edited the videos into a single performance. Their first video, a performance of Jay Chou's "Blue and White Porcelain," is edited to look like a live Zoom concert. The video went viral soon after posting, racking up several thousand shares on Facebook and more than 80,000 views on YouTube.

"We definitely didn't expect so many views and so much support for our video," said Isabella Xie, a performer with the group. "When it was getting popular on Facebook, we started to notice that our friends from other universities and back home were commenting on it. It definitely took me by surprise."

The popularity of Music Dynasty's "quarantine concerts" couldn't come at a better time for the group. Their first album, "Eclipse," will have a digital release in May. According to Yanni Gu, also a member of the group, while the videos have acted as good promotion for their album, it was the recording sessions last semester that prepared them for the unique challenge of creating videos while social distancing.

"Recording the album was difficult for me, because a cappella is about a group doing something together," said Gu. "When you sing together, you have the emotions and dynamics right there. Singing individually proved to be a bit of a challenge, but the album came out great, and it prepared us for putting together these videos."

When the university announced in mid-March that students wouldn't be returning to campus after spring break, Kameka Herbst, a dancer with Korean Pop Motion, began to brainstorm ways the group could continue to perform. Realizing Zoom wouldn't display the highly coordinated dance moves the group is known for, she looked to the videos made by Music Dynasty and other singing groups and decided to translate that idea to dance.

"It was important for me to do this for our seniors. This would have been their last showcase and then suddenly they just lost it," Herbst said. "So I really wanted to do something for them to at least make their transition out of KPM a bit less abrupt."

For their test video, Herbst recruited members to do a dance cover to Mamamoo's "HIP," one of the songs scheduled for their end-of-year showcase. While rehearsing her portion of the dance, Herbst realized these videos are both a great way for members to stay engaged in the club and an easy way to stave off quarantine boredom.

"When I returned to Hong Kong, I actually had to be put into quarantine, like monitored with a government bracelet and everything," Herbst said. "What I found out was that working on a dance number is a pretty good way to keep yourself occupied when you're literally stuck in the house."

Christian a cappella group Adoremus has plans to create its own remote music videos in the near future, but incoming director Ria Gualano said keeping the group's social bonds strong has been more important than trying to put together a new performance. The group has turned its weekly rehearsal times into Zoom meetings where members can catch up on each other's lives, pray together, and try to create a new sense of normalcy.

They're currently planning a remote recording for their incoming member introductions and senior solos—their way of making sure Adoremus' members get the showcase they deserve.

Gualano said while there have been technical challenges to keeping the group musically active, they've never felt closer.

"It's hard, because we've had to miss out on some events that we were excited for," Gualano said. "But honestly, we're just feeling very thankful that we have a platform through which we can communicate and stay in touch with each other. We're a family, and we're each other's support." 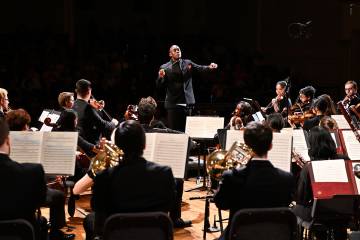 The high value of the performing arts during social distancing

Published April 29, 2020
"Music is there even when we can't leave our houses," says Peabody Dean Fred Bronstein. "And it's more important than ever."