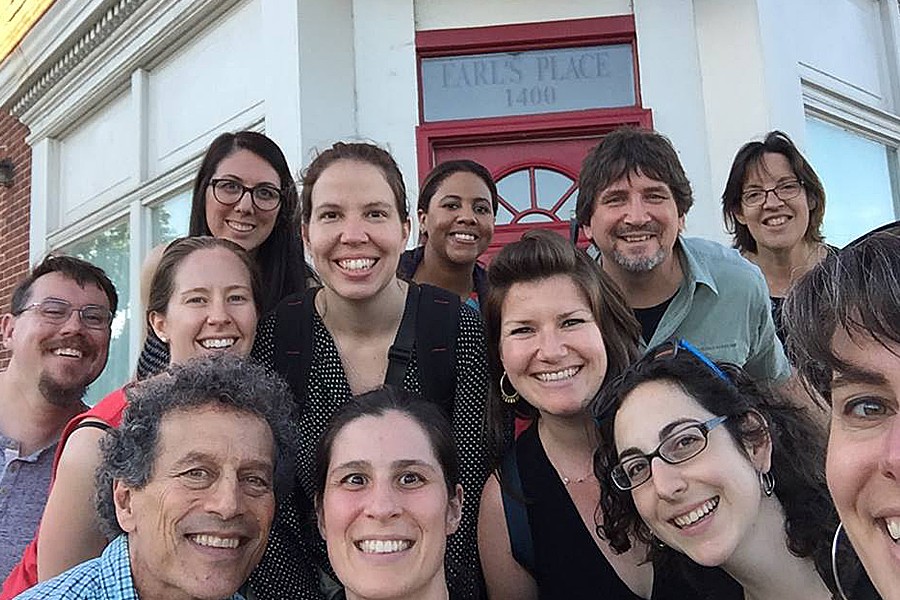 Calling all singers, vocalists, and former or current choir members. The Peabody Community Chorus begins rehearsals Sept. 6 for its coming season. Anybody in the greater Johns Hopkins or East Baltimore community who might be interested in the chorus is invited to the weekly rehearsals, which take place every Wednesday evening from 6 to 7:30 p.m. at the Henderson-Hopkins Elementary School in East Baltimore.

The first two rehearsals of September are "open sings," where potential newbies can drop in and see what singing in the Community Chorus is all about. After September, chorus director Kristen Toedtman would like participants to commit to weekly attendance in order to prepare for upcoming performances.

Toedtman says the chorus's current core group is about 15 men and women. "Some are affiliated with Hopkins, some not at all," Toedtman says. "There are some people who studied singing, there are definitely people who have never sung in a choir before. Most common is, 'I sang in choir at a high school or college but I haven't done it in a long time and I really want to be singing again.'"

That enthusiasm is what Toedtman harnesses. The Community Chorus initially focused on typical classical choral music, such as works by Brahms and Schubert, when it was created in 2014 as a collaboration of three Johns Hopkins entities—the Peabody Institute's Preparatory division, the School of Education, and the Office of the President—and the staff and administration of the Henderson-Hopkins School to bring members of those wider communities together.

When Toedtman—a Peabody alumna and veteran composer and working musician who performs as a soloist, singer/songwriter, choir member with the Los Angeles Master Chorale and Los Angeles Philharmonic, and session singer—took over the chorus with the 2016–17 academic year, she envisioned the choir accommodating a wider range of musical styles and vocal abilities.   She added pieces such as a Venezuelan lullaby, "Soundchants," by American composer Sid Robinovitch, and an arrangement of "Balm in Gilead" by Ysaye Barnwell, a former Sweet Honey in the Rock member who leads a monthly community sing in Washington, D.C. This year Toedtman plans on adding to the repertoire songs from a variety of cultures with rich singing traditions, such as Africa, Eastern Europe, and Appalachia.

Toedtman also wrote a piece for the chorus, and this year she's partnering with Peabody faculty composer Judah Adashi to put out a call for scores in hopes of generating pieces written explicitly for the group. With a small chorus, which currently has more female than male vocal ranges, it's a challenge to find repertoire that can suit everybody's skill level. In rehearsals, "we do a mix of reading printed music, and then also learning by rote, where I teach them and they repeat it back," she says. "We also do some improvising and harmony singing, with the goal to be just singing and practicing harmonizing."

That simple, magical act of singing together is the ultimate goal. "We all have voices," Toedtman says, adding that there's something wonderfully vulnerable about singing in public. (Toedtman is still putting together this year's performance schedule.) "The joy is just letting your voice be as true to yourself as possible, which is my aim in my own vocal technique and also in guiding people singing. You often get surprised by what comes out.

"Plus, I think it's really exciting, as a person singing in a choir, and listening to people singing in a choir, just the physics of actually singing with another person," she continues. "When you think about all of the strife that's going on in our close quarters, in our world, in America, I get really excited just thinking about getting people together to make song. We're not sitting down and talking about politics, although it will come up. We don't know everybody's life, or where they've come from. But we're singing together, and it's really moving to sing even in unison with another person. You're literally vibrating the air between you."