Universities play a vital role in fostering democracy and educating citizens, Ronald J. Daniels says, yet many have failed in these essential responsibilities in recent years

Johns Hopkins University President Ronald J. Daniels discussed the vital role colleges and universities play in democratic society in remarks presented for the opening plenary session of the American Association of Law Schools annual meeting in Washington, D.C., last week, arguing that higher education in the United States has "accumulated a constellation of functions that have nourished and enriched liberal democracy."

Speaking to an audience of roughly 400 law school deans and faculty from across the U.S. and Canada, Daniels—himself a former law professor at the University of Pennsylvania and dean of the law faculty at the University of Toronto—outlined four essential functions of universities in promoting democracy: supporting social mobility, fostering debate and diverse points of view, advancing scientific inquiry, and preparing citizens to participate in democracy.

"Through these functions, the university has come to stand alongside other core institutions like the free press, civic organizations, and an independent judiciary as one of the bulwarks of liberal democracy," he said, echoing sentiments he articulated in an op-ed published in The Washington Post in late December.

But universities have flagged in their duties, Daniels said.

For example, the university model of civic education has shifted toward service learning—a vital and important form of engagement and learning that strengthens the bond between students and communities, Daniels said, but does not convey either a strong knowledge of political history and institutions or the skills needed to engage those political institutions to create lasting change.

Similarly, although student populations are more diverse than ever before, Daniels argued that universities have enabled students to avoid the kinds of immersive social interactions that have historically made college campuses dynamic and pluralistic places. "This is representation without meaningful engagement," he said.

Whereas universities have long served as an engine for social mobility, Daniels decried the "pernicious" admissions policy of legacy preferences that favor for admission the children of alumni, who are often already the recipients of significant socioeconomic and educational advantages. Johns Hopkins has ended legacy admission preferences in recent years, Daniels said.

Finally, for more than a century, research universities in the U.S. have provided the expertise, experimentation, and discoveries that have supported the nation's democratic values by creating a shared sense of truth and a reliable source for new knowledge. And yet, Daniels said, researchers and university faculty today face public suspicion about the nature of their work, the trustworthiness of their findings, and their "supposed partisan biases." He urged academic leaders to commit to greater research transparency and rigorous review and publication standards.

In short, "the university has secured its position as indispensable to the modern liberal democratic experiment," Daniels said. "But these are also the very sites where it has stumbled," he said, adding "ours is a moment that calls for experimentation, research, and new thinking."

Among the experimentation and new thinking taking place at Johns Hopkins, the university launched in 2017 the Stavros Niarchos Foundation Agora Institute, which is aimed at strengthening global democracy through powerful civic engagement and informed, inclusive dialogue. In November, the SNF Agora Institute hosted a conference in Washington, D.C., to examine the models of civic education that support democratic values. Next week in Cincinnati, the institute will host a conference aimed at understanding collective action. To support the effort to prepare generations of active citizens, in 2018 the university launched an effort coordinated through the Center for Social Concern to bolster student voter turnout for the 2018 midterm election. As a result of the Hopkins Votes effort, more than 5,000 more Hopkins students voted in 2018 than did in 2014, increasing voter turnout among registered students by more than 35 percentage points, from 22.6% to 58.5%.

In addition to ending legacy preference in university admissions, Johns Hopkins has endeavored to boost social mobility through a commitment to need-blind admissions, a practice that increases college access. A landmark $1.8 billion gift in support of financial aid from philanthropist, business leader, and three-term New York City Mayor Michael R. Bloomberg in 2018 has also ensured that a Hopkins education is within reach for qualified, high-achieving students, regardless of their ability to pay.

These and other efforts across the university demonstrate the university's commitment to expanding access to college education, fostering civic engagement among students, and ultimately strengthening democracy.

"From the way we manage admissions and aid, to the way we build the curriculum, foster the culture on our campuses, and conduct and disseminate research, we must acknowledge that universities are either contributing to or failing to contribute to liberal democracy, which has fueled so many of the most precious advances of modernity," Daniels said during his closing remarks the AALS meeting. "Our universities . . . must act deliberately, with mission and, most importantly, with urgency. The stakes are simply too high to do otherwise."

Following his remarks, Daniels participated in a plenary panel discussion alongside Risa L. Golubuff, dean of the University of Virginia School of Law; Larry Kramer, former dean of Stanford Law School and now president of the William and Flora Hewlett Foundation; and Vince Rougeau, dean of Boston College Law School. 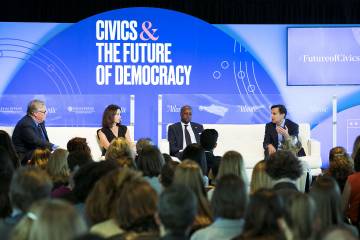 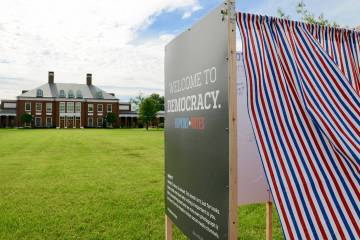