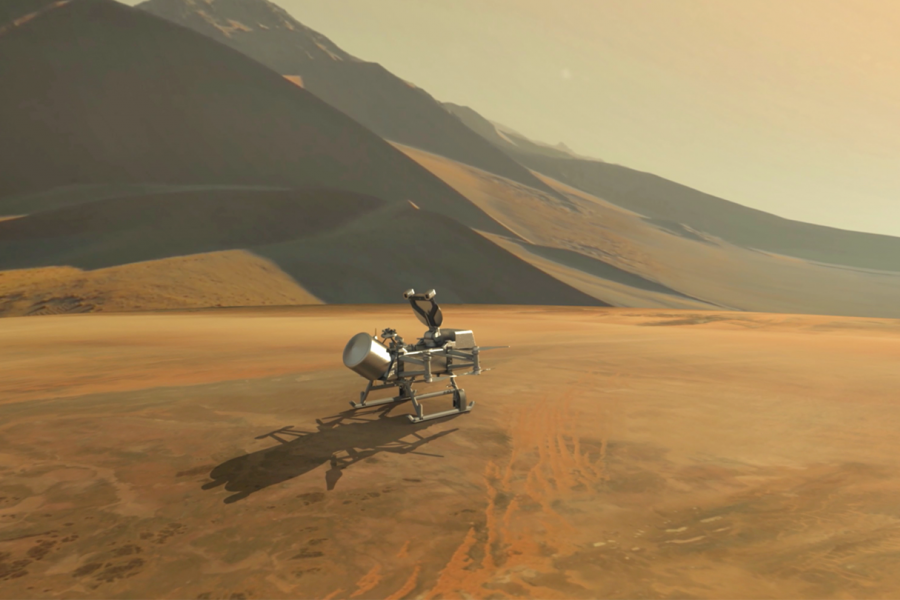 It sounds like science fiction: fly a robotic rotorcraft over the dunes of an alien moon. But NASA has given a team led by the Johns Hopkins Applied Physics Laboratory the opportunity to turn this idea into space exploration reality.

NASA announced today that it had selected Dragonfly, a rotorcraft-lander expedition to Saturn's large, exotic moon Titan, as the next mission in its New Frontiers Program. Launching in 2026 and arriving in 2034, Dragonfly will explore dozens of locations across Titan, sampling and measuring the composition of Titan's organic surface materials to characterize the habitability of Titan's environment and investigate the progression of prebiotic chemistry.

"Dragonfly is a bold, game-changing way to explore the solar system," said APL Director Ralph Semmel. "This mission is a visionary combination of creativity and technical risk-taking that will help us unravel some of the most critical mysteries of the universe—including, possibly, the keys to our origins. We're honored that NASA has entrusted APL and our partners with this great opportunity and responsibility."

Scientists consider the icy moon Titan to be the most Earth-like world in the solar system—a virtual chemistry lab that can provide clues to how life may have arisen on our planet. During its 2.7-year baseline mission, Dragonfly will explore environments from organic dunes to the floor of an impact crater, where liquid water and complex organic materials key to life once existed together. Its scientific instruments—to be built by institutions across the nation—will study how far prebiotic chemistry may have progressed. They also will investigate the moon's atmospheric and surface properties and its subsurface ocean and liquid reservoirs.

"Titan is such an amazing, complex destination," said Elizabeth "Zibi" Turtle, Dragonfly principal investigator from APL. "We don't know the steps that were taken on Earth to get from chemistry to biology, but we do know that a lot of that prebiotic chemistry is actually happening on Titan today. We are beyond excited for the chance to explore and see what awaits us on this exotic world."

"Visiting this mysterious ocean world could revolutionize what we know about how life formed in the universe. This cutting-edge mission would have been unthinkable even just a few years ago, but we're now ready for Dragonfly's amazing flight."
Jim Bridenstine
NASA administrator

Titan is larger than the planet Mercury and is the second largest moon in our solar system. As it orbits Saturn, it is about 886 million miles away from the Sun, about 10 times farther than Earth. Because it is so far from the Sun, its surface temperature is around minus-290 degrees Fahrenheit. Its surface pressure is also 50% higher than Earth's.

Dragonfly took advantage of 13 years' worth of data from NASA's Cassini mission to choose its targets. It will first land at the equatorial "Shangri-La" dune fields, which are eerily similar to the linear dunes in Namibia in southern Africa, before moving on to other areas in a series of "leapfrog" flights of around 5 miles, stopping along the way to take samples from compelling areas with diverse geography. It will finally reach the Selk impact crater, where there is evidence of past liquid water, organics—the complex molecules that contain carbon, combined with hydrogen, oxygen and nitrogen—and energy, which together make up the recipe for life.

Dragonfly also leverages decades of autonomous drone experience and well-understood flight dynamics on Earth and applies them in a whole new environment. The dense, calm atmosphere and low gravity make flying an ideal way to travel across Titan. The lander—about 10 feet long and 10 feet across from rotor tip to rotor tip—will eventually fly more than 108 miles, nearly double the distance traveled to date by all the Mars rovers combined.

"With the Dragonfly mission, NASA will once again do what no one else can do," said NASA Administrator Jim Bridenstine. "Visiting this mysterious ocean world could revolutionize what we know about how life formed in the universe. This cutting-edge mission would have been unthinkable even just a few years ago, but we're now ready for Dragonfly's amazing flight."

APL brings decades of space exploration experience to the Dragonfly challenge. Having built 70 spacecraft and approximately 300 specialized space instruments, APL has led missions to the extremes of the solar system—including the Parker Solar Probe's daring passes through the atmosphere of the Sun and New Horizons' exploration of Pluto and distant Kuiper Belt. 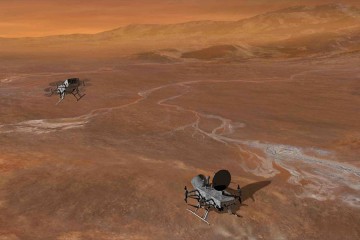