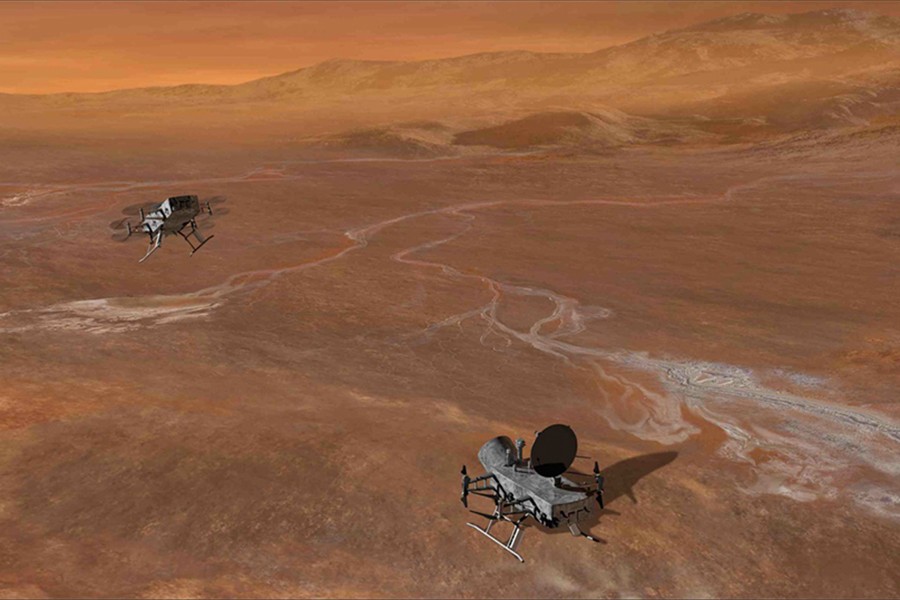 Image caption: The Dragonfly dual-quadcopter, shown twice here in an artist’s rendering, could make multiple flights to explore diverse locations as it characterizes the habitability of Titan's environment.

The Johns Hopkins Applied Physics Laboratory has submitted a proposal to NASA outlining a daring New Frontiers-class mission concept that would use an instrumented, radioisotope-powered dual-quadcopter to explore potential habitable sites where life could be developed on Saturn's largest moon, Titan.

The concept, called Dragonfly, would capitalize on the rapid advances made in recent years to autonomous aerial systems—sometimes referred to as the "drone revolution." The increased reliability and capability of these systems would enable Dragonfly to make numerous flights, moving from one geologic setting to another on the moon's surface.

Titan has diverse, carbon-rich chemistry on a surface dominated by water ice, as well as an interior ocean. It is one of a number of "ocean worlds" in our solar system that hold the ingredients for life, and the rich organic material that covers the moon is undergoing chemical processes that might be similar to those on early Earth. Dragonfly would take advantage of Titan's dense, flight-enabling atmosphere to visit multiple sites by landing on safe terrain, and then carefully navigate to more challenging landscapes.

"[W]e can multiply the value of the mission if we add aerial mobility, which would enable us to access a variety of geologic settings."
Peter Bedini
Dragonfly project manager

"This is the kind of experiment we can't do in the laboratory because of the time scales involved," said APL's Elizabeth Turtle, principal investigator for the Dragonfly mission. "Mixing of rich, organic molecules and liquid water on the surface of Titan could have persisted over very long timescales. Dragonfly is designed to study the results of Titan's experiments in prebiotic chemistry."

With Titan's dense atmosphere and low gravity, flight is substantially easier than on Earth, giving Dragonfly a very broad range of capability. While there is enough sunlight at Titan's surface to see, there is not enough to use solar power efficiently, so Dragonfly would be powered by a Multi-Mission Radioisotope Thermoelectric Generator, or MMRTG.

At each site, Dragonfly would sample the surface and atmosphere with a suite of carefully selected science instruments that will characterize the habitability of Titan's environment, investigate how far prebiotic chemistry has progressed, and search for chemical signatures indicative of water- and/or hydrocarbon-based life. These measurements include:

"We could take a lander, put it on Titan, take these four measurements at one place, and significantly increase our understanding of Titan and similar moons," said Bedini. "However, we can multiply the value of the mission if we add aerial mobility, which would enable us to access a variety of geologic settings, maximizing the science return and lowering mission risk by going over or around obstacles."