Event co-hosted by SNF Agora Institute, Renew Democracy Initiative brings together leading experts to discuss the rise of populist movements and the threat they pose to democracy around the globe 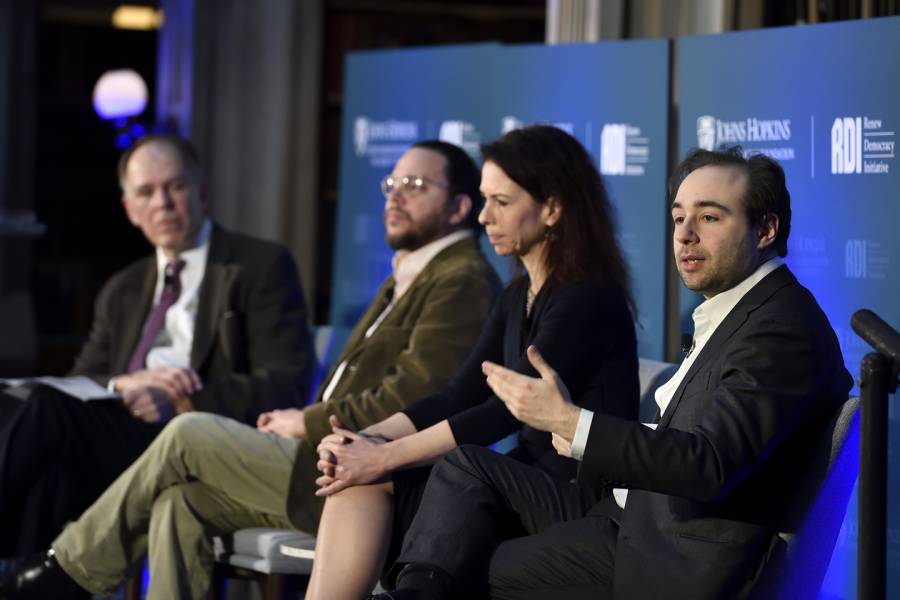 There was a true meeting of the minds in Baltimore on Thursday as more than 20 leading pundits, policymakers, scholars, and journalists visited the George Peabody Library at Johns Hopkins University for a daylong conference centered on the crisis of rising authoritarianism and decreasing democracy around the world.

"The symptoms are all around us," said Johns Hopkins University President Ronald J. Daniels during his opening remarks. "We see it in the erosion of public discourse, in the diminishing integrity of free elections, in a media landscape [of] 'fake news' … and in the rise of entrenched and bitter partisan animosity."

"Reawakening the Spirit of Democracy,"—co-hosted by the Stavros Niarchos Foundation Agora Institute at Johns Hopkins and the newly launched Renew Democracy Initiative—was "a step toward confronting the causes and conditions of these challenges to liberal democracy, and devising ways to address them," Daniels said. "It's also a critical opportunity to model the mutual respect and productive discourse among divergent viewpoints that are so foundational to the democratic process."

Panelists discussed an array of related topics, including the rise of populism around the globe, free speech controversies on campus, and election meddling by state actors on social media. Pundits and scholars representing political perspectives on both the right and the left shared views on where the Republican and Democratic parties may be headed in the 2020 elections and beyond.

"Despite what you might see on cable news, there is room in the middle," said Garry Kasparov, who founded the Renew Democracy nonprofit in 2016. "There's room for respect, for cooperation, even for sanity."

Full videos of both the morning session and the afternoon session. Some of the events memorable comments are included below: 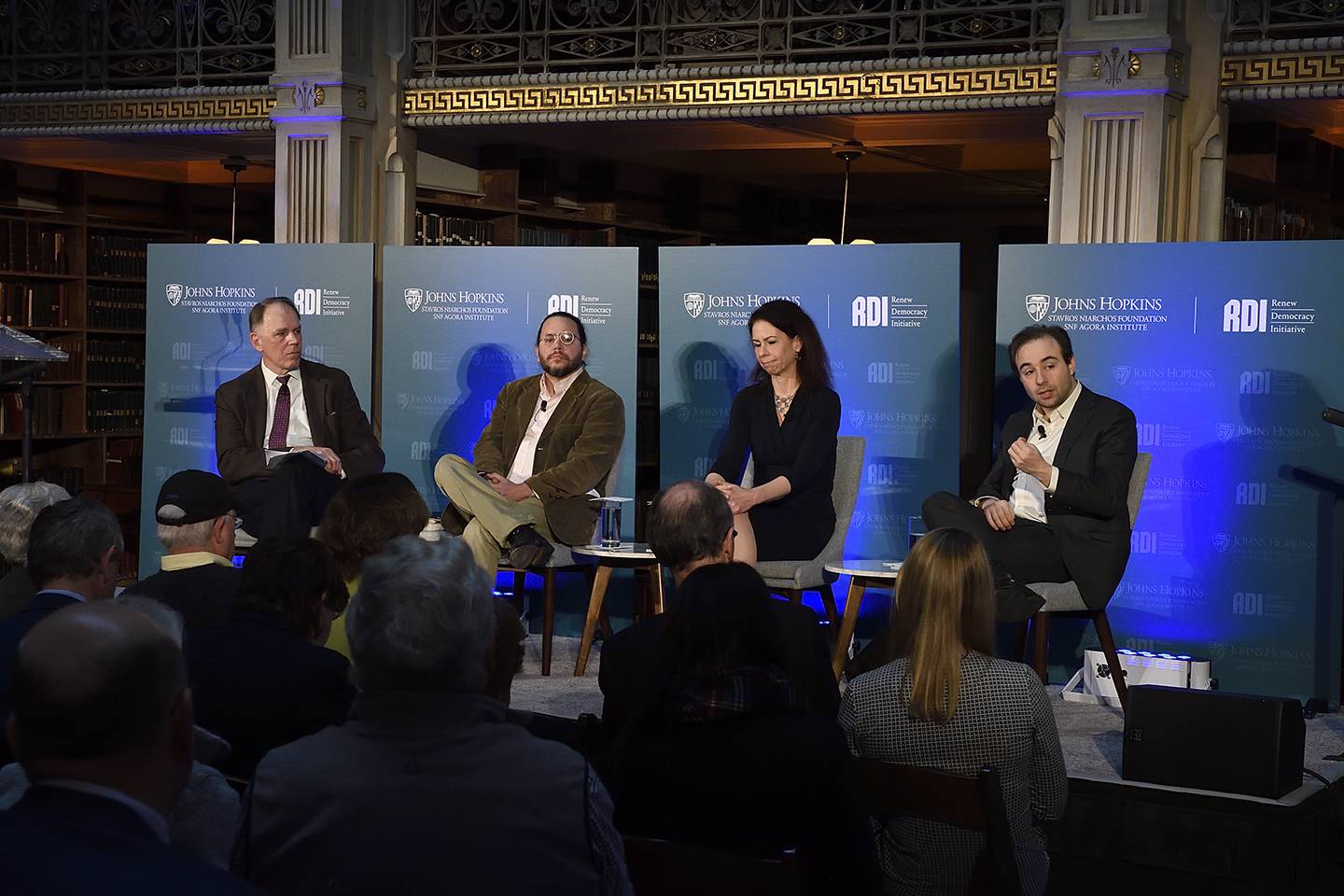 Yascha Mounk, the newly appointed senior fellow at the SNF Agora Institute, described the mindset that drives populist leadership: "It's the claim that 'I alone really stand for the people, and everybody who disagrees with me is therefore, in a real deep important sense, illegitimate.' And it's precisely that claim that otherwise strikingly different people on left and right have in common. That's what Donald Trump and Hugo Chavez have in common."

Here's why that is so "uniquely dangerous," Mounk said: "If you don't accept that there's legitimate opposition—if you think a press that criticizes you shouldn't be allowed to reach a big audience, [or] judges should actually do your bidding rather than try to protect the rule of law—then you're going to pretty quickly undermine the basic rules and norms of the political system, and you end up in a place … where democratically elected political leaders can no longer be displaced by democratic means."

Panel 2: Discourse on the Right 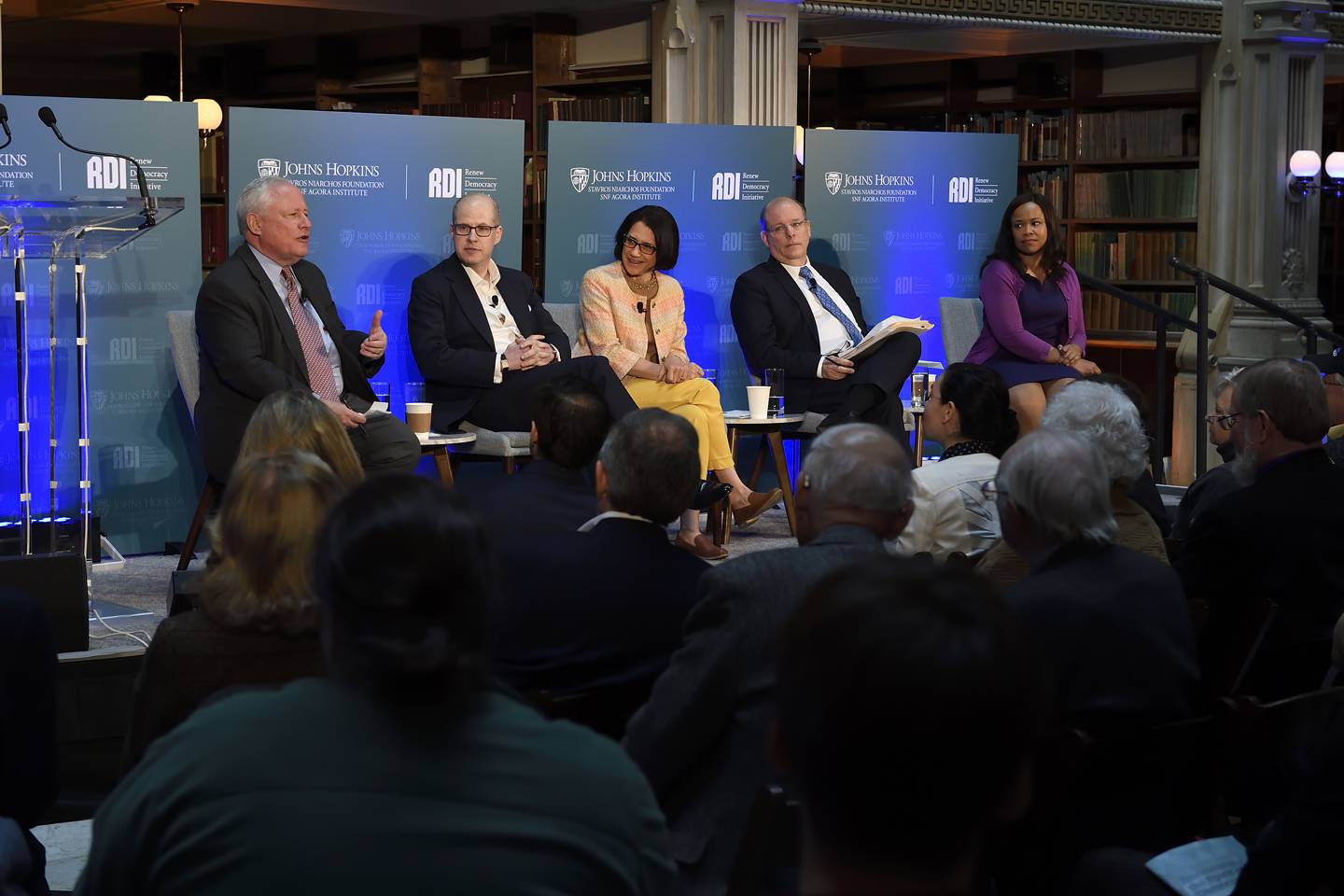 Image caption: From left: Bill Kristol, founding director of Defending Democracy Together; Max Boot, senior fellow for national security studies at the Council on Foreign Relations; Jennifer Rubin, opinion writer for The Washington Post; Pete Wehner, senior fellow at the Ethics and Public Policy Center and a contributing opinion writer for The New York Times; and Dana White, former assistant to the secretary of defense for public affairs

Washington Post opinion writer Jennifer Rubin, who described herself as "refugee from the right," said "the center right has completely disappeared, and the center left has been under siege and ineffective." Centrists of both parties, she suggested, need to look together at how "to rebuild [an] intellectually coherent and governable society."

Pete Wehner, senior fellow at the Ethics and Public Policy Center and contributing opinion writer to The New York Times, offered his views on why Donald Trump was able to capture the Republican nomination in 2016 and ultimately win the presidency.

"I don't think it was agenda, particularly, that appealed to people. I think it was his style. … What I heard in the 2016 campaign is some version of this: look, he's imperfect, he's rough around the edges, but he's a fighter. … We're in a knife fight, and he's going to bring a glock to the knife fight."

Dana White, who formerly in the Trump administration as Pentagon chief spokesperson for Secretary Jim Mattis, added: "Both parties forgot about a huge part of our population—and I think that was a huge wake-up call for those of us who live in the bubble of Washington—that there's an America out there that is hurting, and frankly that his message motivated," she said. "Perhaps the greatest contribution President Trump has made, is he's made us aware of what we didn't know."

Added Max Boot, a senior fellow at the Council on Foreign Relations: "There's no question that there's a genuine hurt that Donald Trump managed to tap into. But what he's done, I believe … is channeling their resentment and grievances against people of different skin colors and different religions. 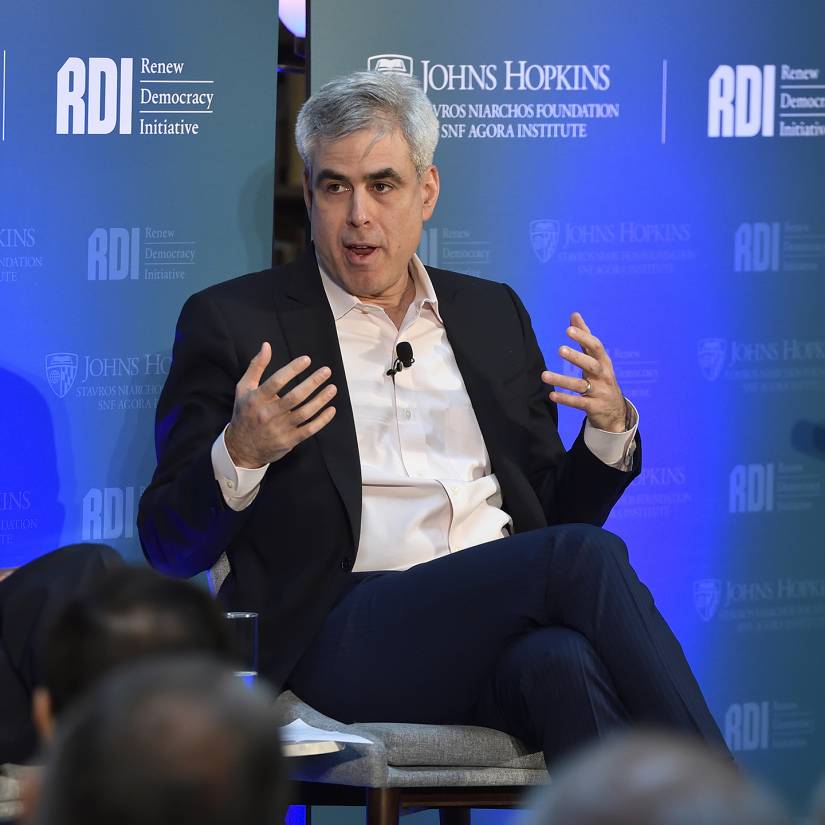 Jonathan Haidt, a professor of ethical leadership at the New York University Stern School of Business, spoke about the complexities of free speech issues at colleges and universities:

"The biggest problem we have on campus I believe is orthodoxy," he said. "That is, when there are blasphemy laws … when there are things you can say, studies you can point to, people you can cite—and you will be shamed and excluded for doing so."

He later added: "What we do in universities is we give [students] the safest possible environment, ... we prepare them for a world in which if they are offended, they have bureaucratic means to punish the offender. And then we send them out in to the world, where a normal, progressive company with good values is going to be intolerable to them."

Panel 4: Discourse on the Left 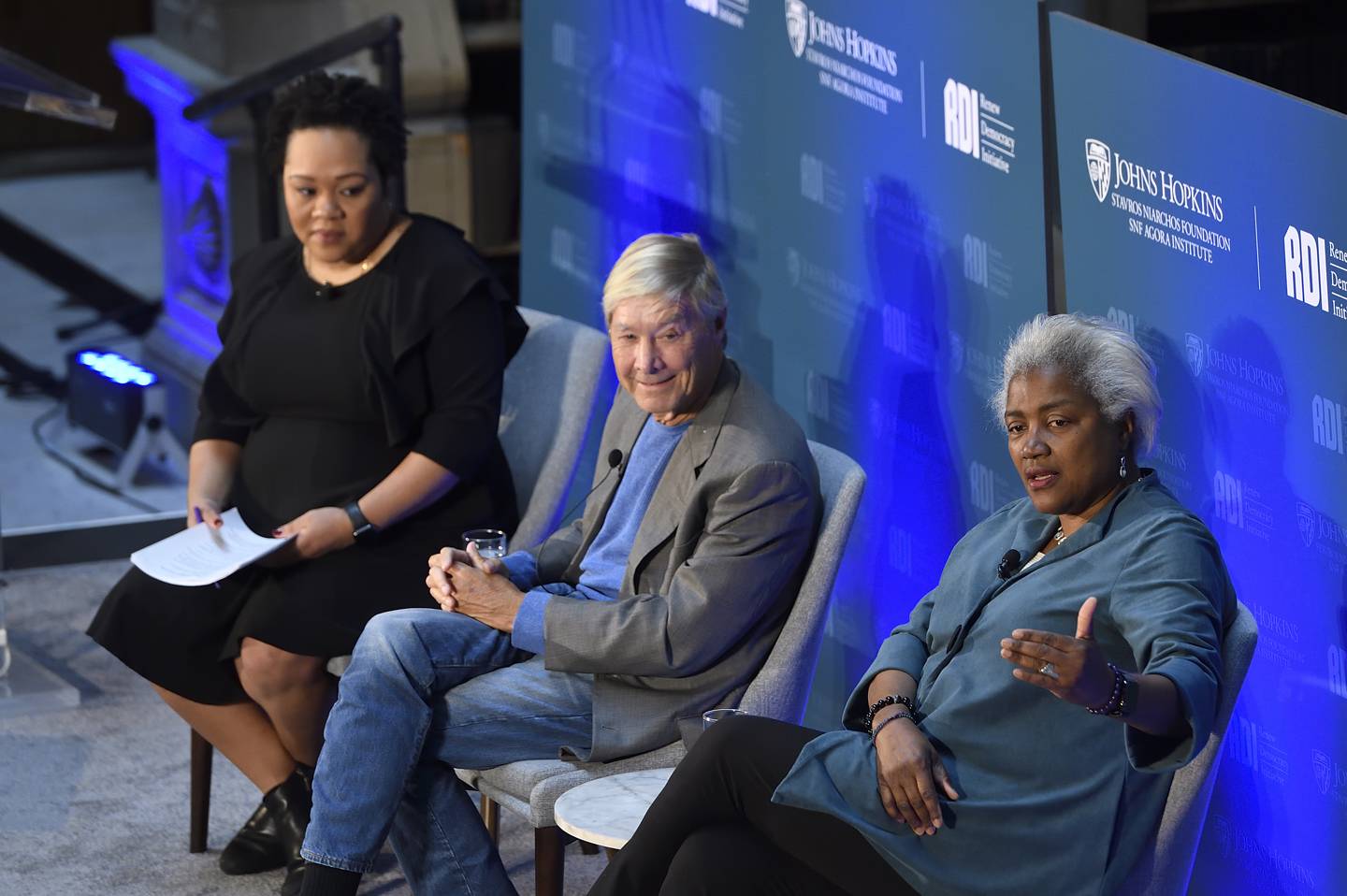 "I think [Alexandria Ocasio-Cortez] has brought a lot of energy and enthusiasm … but the Democrats won in 2018 with a lot of moderate candidates, and by carrying suburban districts as well. And it's a false choice, I think, to say 'We don't care about white voters in the Midwest, but we do care about our base, or vice versa.' The truth is that to win and then to govern, they're going to need to pitch as broad a tent as possible."

Added Donna Brazile, former interim chair of the Democratic National Committee, on the road to reconciling intra-party differences and determining who will top the Democratic ticket in 2020. "Let's have the tough conversations. We're Democrats, we can handle it. And if we can't handle it in this season, God forbid, we will lose. Because there will be a lot of people who say, 'This party stands for nothing. This party is not leading the change we wish to see.'" 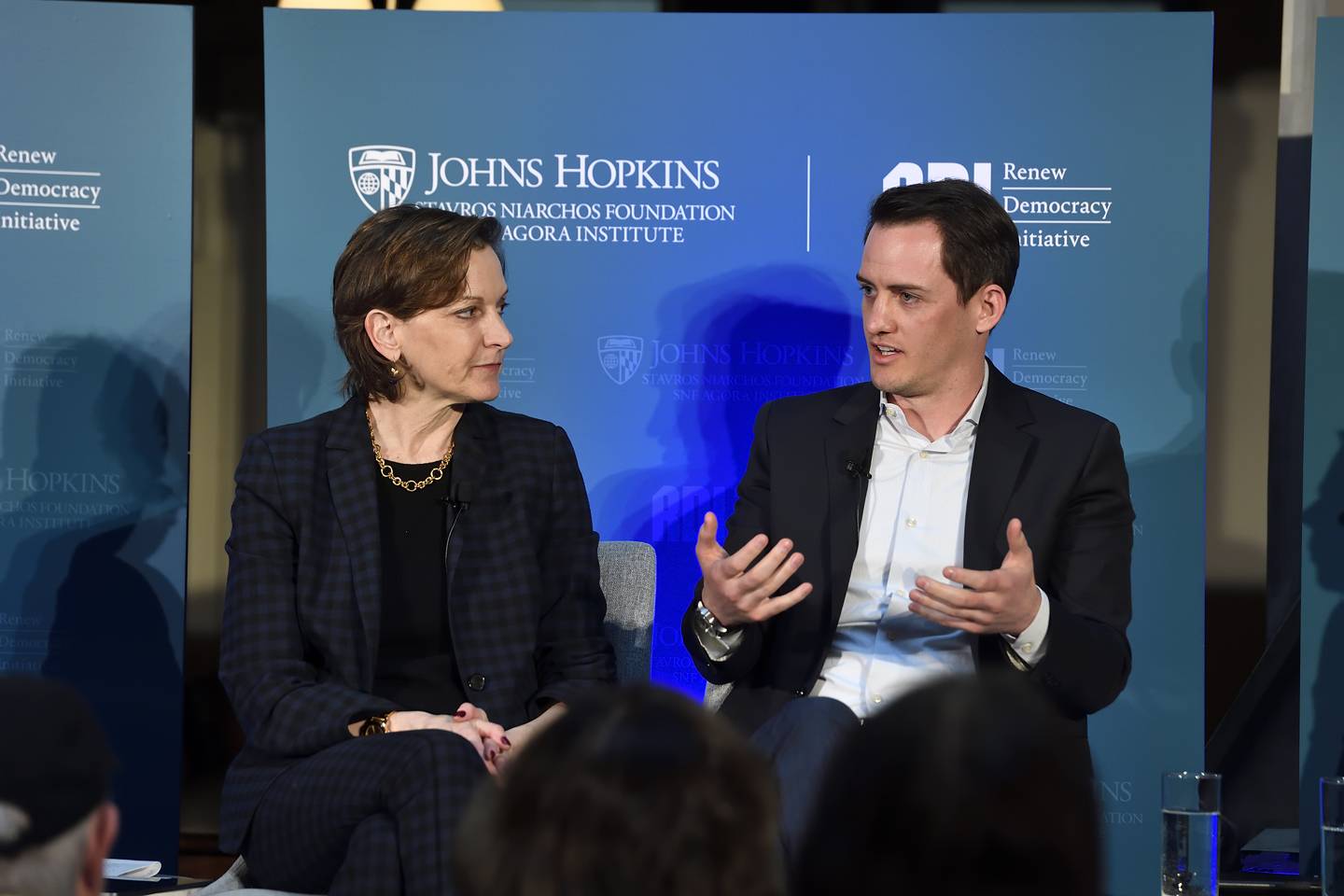 "Fundamentally what we have—and this is what I think is so damaging to democracy—is an increasing problem of trust," said _Washington Post_columnist Anne Applebaum. "One of the effects of polarization is it makes people distrust mainstream institutions. They think the courts, or the press ... have been captured by the other side, so it erodes trust for the institutions that hold the center together. And the Internet has somehow increased that, and I'm afraid it's going even further in that direction."

Graham Brookie, director and managing editor of the Digital Forensic Research Lab, said spreading disinformation online can be a cheap and easy.

"The biggest tool you have at your disposal is not necessarily some deep fake technology or some piece of artificial intelligence ... it's basic creativity that goes into audience engagement," he said, referring to simple text-on-photo "spicy memes" that are easily spread far and wide. "Those achieve a lot of audience impact, they've very shareable, and they're very creative. And that is the future of disinformation." 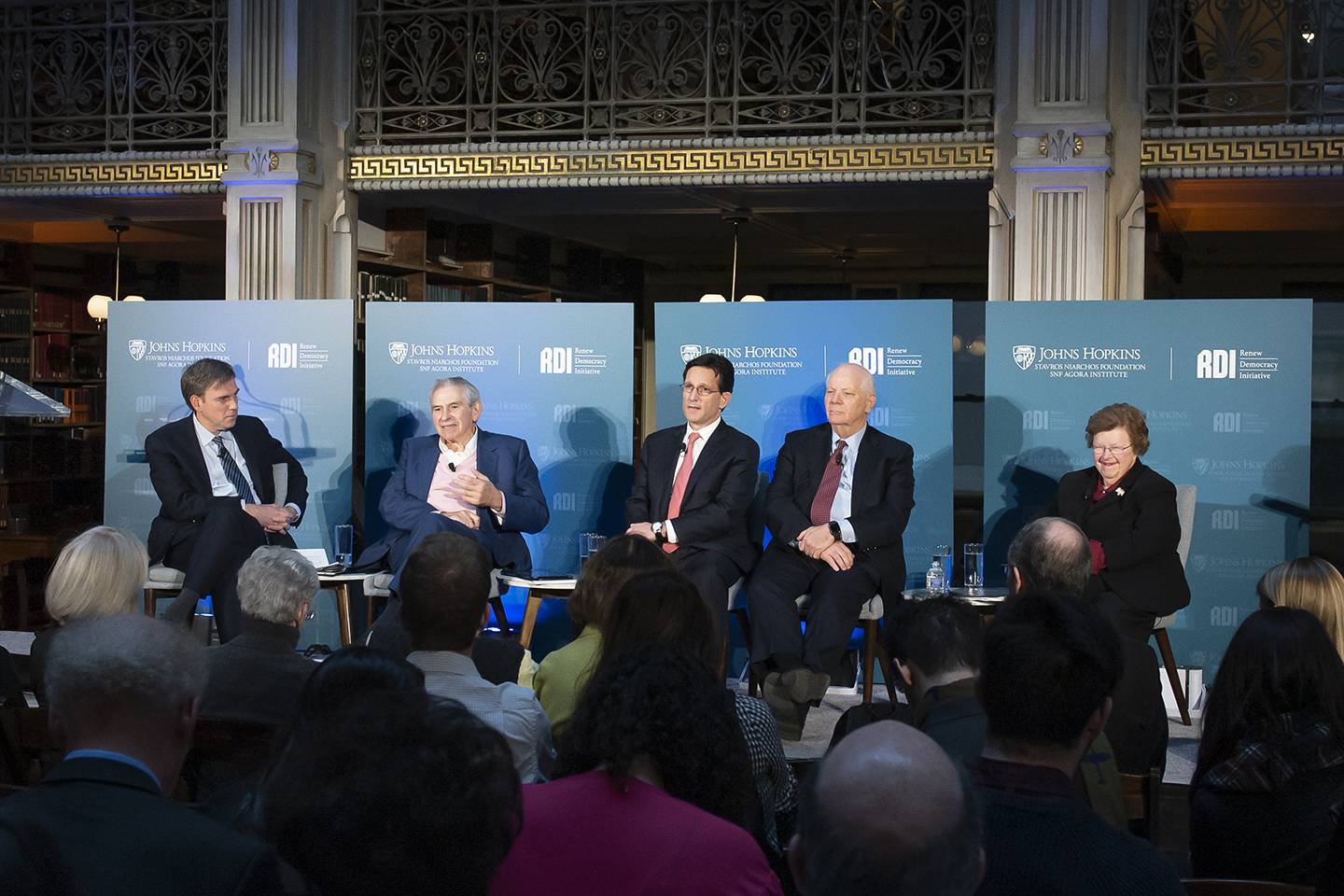 The four panelists fielded an audience question on how young people should envision "an honorable and bipartisan vision for American foreign policy."

Barbara Mikulski, who represented Maryland in the Senate for more than for 30 years and now serves as a professor of public policy at Johns Hopkins, added: "You have to engage in the world, you have to know about the world, and you have to help change it. ... Then work with our country to honor our treaties, our agreements," she said. "I would say, get out there kids, and get us back into the Paris Agreement. Global warming is a cause that could bring us together, and even find new jobs that we're looking for."

Added Sen. Ben Cardin (D-MD): "When we stick to our values, we can change the world for the better."

"Never, ever forget the exceptionalism of America," said Former House Majority Leader Eric Cantor (R-VA). "We have dynamic times right now, and things seem to be changing, disruption abounds—but never, ever forget this notion that America is not just a country, we are an idea, and we need to stand by that and our founding principles."

"America is the last best hope of freedom in the world," said Paul Wolfowitz, a visiting scholar to the American Enterprise Institute. "Freedom is under challenge from some very powerful countries and some very ugly movements. It was challenged in the 1930s and in the 1940s and '50s by the Soviet Union; the American cavalry rode to the rescue. There's no one to ride to our rescue if we fail." 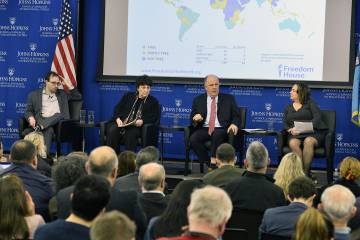 Published Feb 6, 2019
Experts meet at SAIS to discuss the downward trend in democracy documented in the new Freedom in the World 2019 report 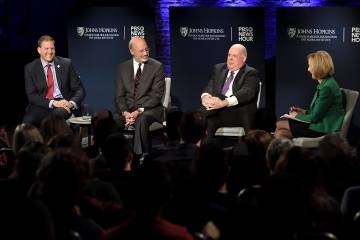