A documentary from Johns Hopkins showcasing food policy successes is making the rounds through the film festival circuit and will be featured at events in Chicago and California this spring.

Food Frontiers, produced by JHU's Center for a Livable Future, highlights six projects from around the U.S. that are increasing access to local and healthy foods, from a grassroots-style grocery store in Cody, Nebraska, to a $190 million strategy to tackle Pennsylvania's food deserts.

The 36-minute film, which debuted last May and is available on YouTube, will be featured March 8 in Chicago's One Earth Film Festival and at the 15th annual Riverside International Film Festival in California, which takes place from April 21-30.

That makes four festivals so far for the CLF documentary, which was screened this past fall in the Life Sciences Film Festival in Prague and the Alexandria Film Festival in Virginia. Additional bookings may be coming in the future, according to Leo Horrigan and Mike Milli, the CLF staffers who spent two years producing Food Frontiers.

Horrigan, who will attend the Chicago event in person for a post-film discussion, says the festival screenings mark "a stamp of approval from people who are really paying attention to the film's themes."

In addition to the Nebraska and Pennsylvania stories, Food Frontiers highlights a nonprofit that develops farmers markets in New York City; a cooking education program in Austin, Texas; a Virginia pediatrician who runs cooking classes; and a southern California enterprise that brings local produce to school cafeterias.

On top of the attention it's getting in festivals, Food Frontiers is seeing practical applications in high school classrooms. That is, in fact, the original purpose for the film, which was developed as part of CLF's Food Span curriculum.

CLF's 17 lesson plans, free and downloadable, are designed to give high-schoolers an understanding of critical food systems, so they can make healthy choices and advocate for change. Food Frontiers is recommended for teachers to use as a launchpad for discussion in Lesson 12, "Why We Eat What We Eat," or Lesson 14, "The Hunger Gap."

The documentary has also proven valuable for college-level curriculum, including a Johns Hopkins Bloomberg School of Public Health class, "Food Systems and Public Health." That class is the basis for a Coursera online offering that will be available next month, Horrigan says.

Horrigan has also presented the film for a University of Maryland class on food writing and plans to visit Towson University this spring.

With college students, he says, the documentary can be especially motivating for budding food policy advocates "who feel empowered to shake up their institutions." 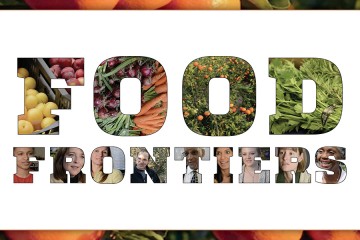