Probe, with APL-built JEDI instrument aboard, will aid our understanding of the origin and evolution of Jupiter 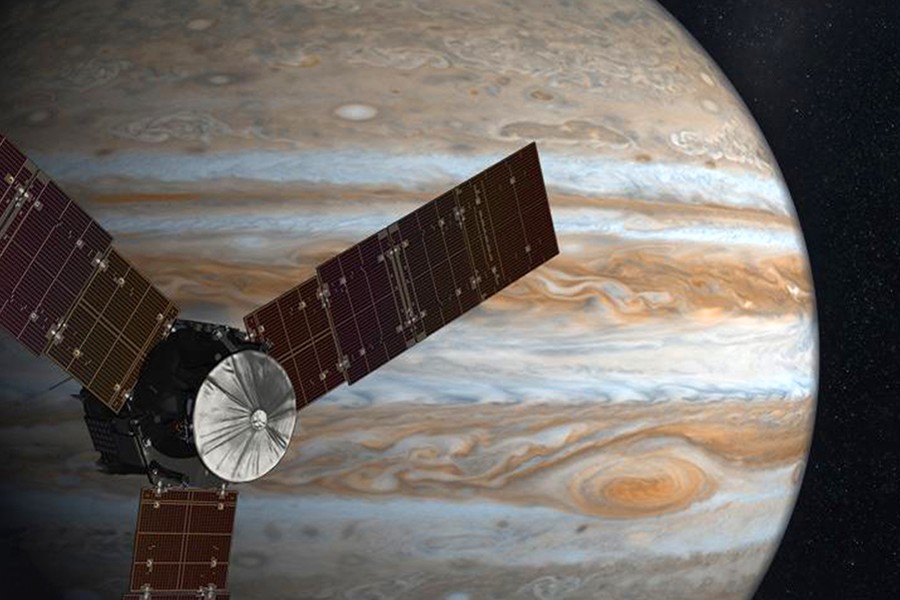 After an almost five-year journey to the solar system's largest planet, NASA's Juno spacecraft—carrying an instrument suite that includes the Jupiter Energetic Particle Detector Instrument, or JEDI, built by the Johns Hopkins Applied Physics Laboratory—successfully entered Jupiter's orbit Monday during a 35-minute engine burn. Confirmation that the burn had completed was received on Earth at 11:53 p.m. EDT Monday.

"Independence Day always is something to celebrate, but today we can add to America's birthday another reason to cheer—Juno is at Jupiter," said NASA administrator Charlie Bolden. "And what is more American than a NASA mission going boldly where no spacecraft has gone before? With Juno, we will investigate the unknowns of Jupiter's massive radiation belts to delve deep into not only the planet's interior, but into how Jupiter was born and how our entire solar system evolved."

Confirmation of a successful orbit insertion was received from Juno tracking data monitored at the navigation facility at NASA's Jet Propulsion Laboratory in Pasadena, California, as well as at the Lockheed Martin Juno operations center in Littleton, Colorado. The telemetry and tracking data were received by NASA's Deep Space Network antennas in Goldstone, California, and Canberra, Australia.

"This is the one time I don't mind being stuck in a windowless room on the night of the Fourth of July," said Scott Bolton, principal investigator of Juno from Southwest Research Institute in San Antonio. "The mission team did great. The spacecraft did great. We are looking great. It's a great day."

Added APL's Barry Mauk, instrument lead for JEDI: "We're all very excited about the success of the Juno orbit insertion—and now we're thrilled about beginning science operations, and visiting unexplored regions of the largest and most powerful planet in the solar system. Jupiter's crushing radiation belts and uniquely intense aurora represent not only fascinating regions of study from a scientific perspective, but vital laboratories for understanding mighty fundamental processes operating throughout the universe. Juno is going to help us really understand Jupiter and the fundamental physics of these important processes."

Preplanned events leading up to the orbital insertion engine burn included changing the spacecraft's altitude to point the main engine in the desired direction and then increasing the spacecraft's rotation rate from 2 to 5 revolutions per minute to help stabilize it.

The burn of Juno's 645-Newton Leros-1b main engine began on time at 11:18 p.m. EDT, decreasing the spacecraft's velocity by 1,212 miles per hour and allowing Juno to be captured in orbit around Jupiter. Soon after the burn was completed, Juno turned so that the sun's rays could once again reach the 18,698 individual solar cells that give Juno its energy.

"The spacecraft worked perfectly, which is always nice when you're driving a vehicle with 1.7 billion miles on the odometer," said Rick Nybakken, Juno project manager from JPL. "Jupiter orbit insertion was a big step and the most challenging remaining in our mission plan, but there are others that have to occur before we can give the science team the mission they are looking for."

Over the next few months, Juno's mission and science teams will perform final testing on the spacecraft's subsystems, final calibration of science instruments, and some scientific data collection.

"Our official science collection phase begins in October, but we've figured out a way to collect data a lot earlier than that," Bolton said. "Which, when you're talking about the single biggest planetary body in the solar system, is a really good thing. There is a lot to see and do here."

Juno's principal goal is to understand the origin and evolution of Jupiter. With nine science instruments, Juno will investigate the existence of a solid planetary core, map Jupiter's intense magnetic field, measure the amount of water and ammonia in the deep atmosphere, and observe the planet's auroras. The mission also will let us take a giant step forward in our understanding of how giant planets form and the role these titans played in putting together the rest of the solar system. As our primary example of a giant planet, Jupiter also can provide critical knowledge for understanding the planetary systems being discovered around other stars.

JEDI, built by APL, will measure charged particles accelerated to high energies within Jupiter's magnetosphere, allowing researchers to study how their interaction with Jupiter's atmosphere generates the most powerful aurora in the solar system.

Juno, which launched on Aug. 5, 2011, is the second spacecraft designed under NASA's New Frontiers Program. The first, the New Horizons mission to Pluto, flew by the dwarf planet in July 2015 after a nine-and-a-half-year flight. 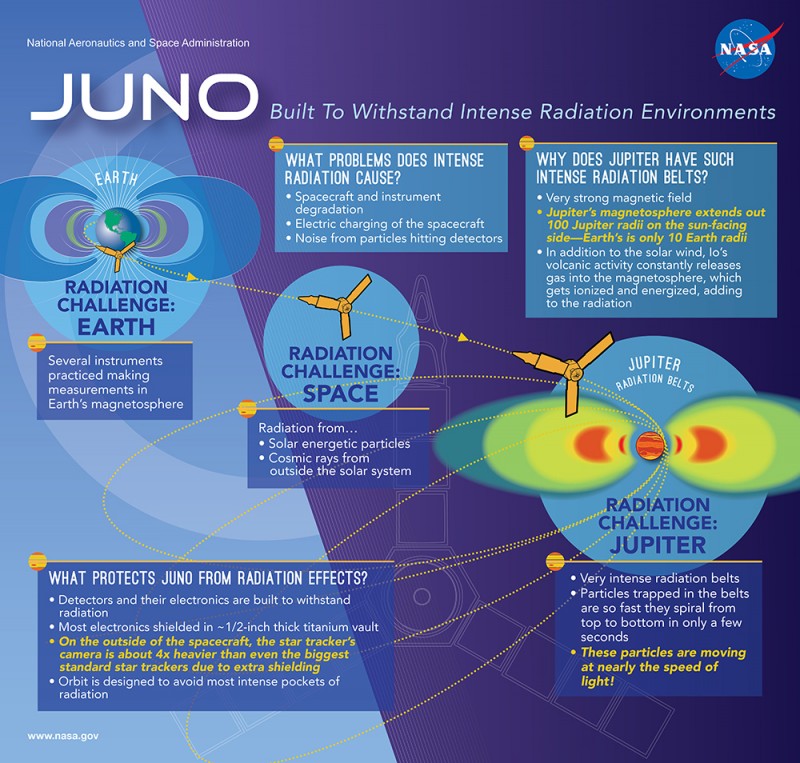 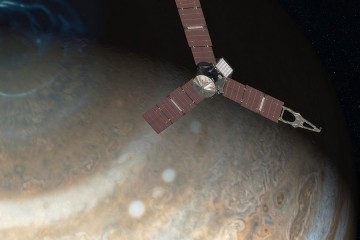