Jeffrey Decoster ("This Is Not a Drill," illustration) is an artist living in Pasadena, California. His work has appeared in The New Yorker, Rolling Stone, and Esquire, among others.

Lawrence Lanahan ("What Are You Worth?") is the author of The Lines Between Us: Two Families and a Quest to Cross Baltimore's Racial Divide (The New Press, 2019). He lives in Baltimore.

Katie Pearce ("Seeing Red") has been writing for Johns Hopkins for five years, joining the magazine as a senior staff writer this winter.

Alva Skog ("Losing Touch," illustration) is a Swedish illustrator based in London. Past clients include Apple, The Guardian, and The New York Times. 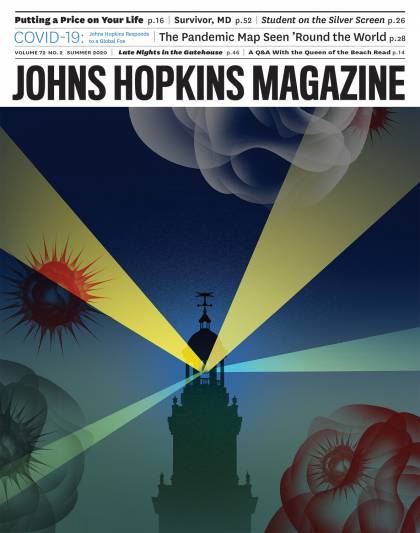 After reading about the multitude of ways Johns Hopkins is working to prevent, treat, and help eradicate COVID-19, illustrator Brian Stauffer says the word "illuminating" came to mind. On this issue's cover, he reimagines the iconic Gilman Hall tower as a lighthouse offering guidance, warning, and enlightenment through the metaphorical darkness. Stauffer's work has also appeared in The New York Times, The New Yorker, The Village Voice, and Rolling Stone.