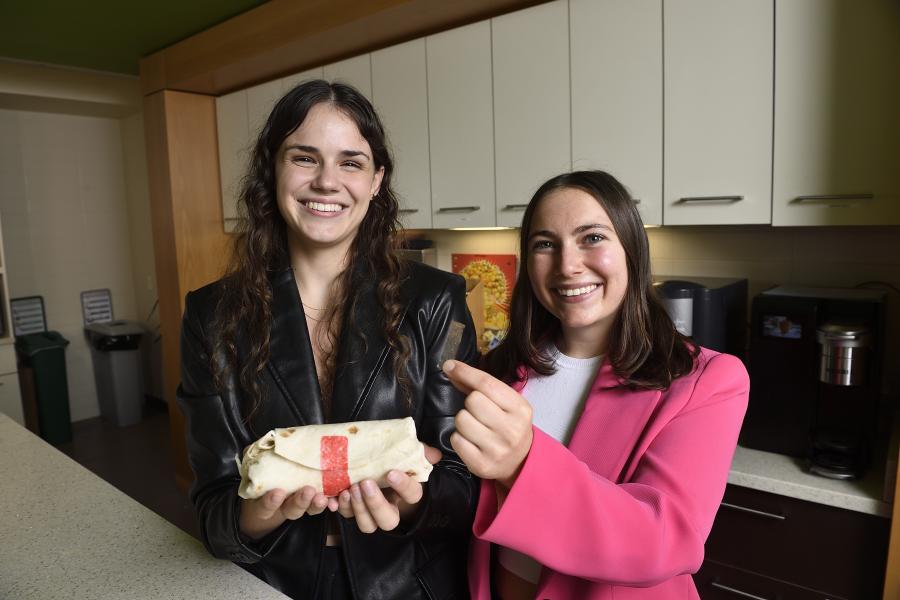 Image caption: Marie Eric and Tyler Guarino display a burrito outfitted with Tastee Tape, which has been dyed red for visibility, and a piece of the clear tape.

Meet the recent Johns Hopkins graduates who dreamed up an edible burrito tape, propelling them to national media attention in the process

"When one of my friends texted me that we got a shoutout, I thought she was joking," Erin Walsh says.

But the ingenious idea of Tastee Tape—edible tape for wraps, burritos, gyros, and other foldable concoctions—took off, launching the students into a media storm. Just today, TIME named Tastee Tape to its annual "Best Inventions" list in the food and drink category, the latest recognition for this ingestible innovation.

Each year, the magazine compiles a list of inventions that change how we live, work, play, and think about what's possible. Hundreds of nominations across categories such as apps and software, connectivity, design, and robotics are evaluated based on factors including efficiency, originality, and impact; TIME calls Tastee Tape "the solution to exploding tacos and burritos the world didn't know it needed."

"As a kid, I always enjoyed inventing and to now be honored by TIME for one of my inventions—my childhood self would not have believed this moment," Marie Eric says.

Team members Marie Eric, Tyler Guarino, Rachel Nie, and Erin Walsh, now alumnae, initially created Tastee Tape for their senior product design course, which is a keystone course in the Department of Chemical and Biomolecular Engineering. The yearlong course asks students to ideate and prototype a product they think would be useful for a broader audience. After going back and forth on ideas, Walsh one day mentioned that, as a student athlete, she needed nutritious, on-the-go meals she could take with her to practice—such as the reliable burrito. But the wraps she made just weren't holding up. She brought her dilemma to the team, and the idea stuck.

"It seemed like a fun product to attempt to bring to life, and one that I had been wishing actually existed for a while," Walsh says.

They tried dozens upon dozens of recipes to get the perfect edible tape, finally landing on a food-safe, fibrous edible scaffold with an organic adhesive. In between Zoom meetings with their design course instructor, Professor Emeritus Marc Donohue, the team developed prototypes at home, sourcing materials at local grocery stores and ordering items from Amazon.

Team members communicated with one another via Zoom as well, and they spent the full academic year to get from idea to functional prototype, testing two to three ideas at once and doing their best to catalog each team member's successes and failures with their recipes—with the failures being, at times, especially disheartening. 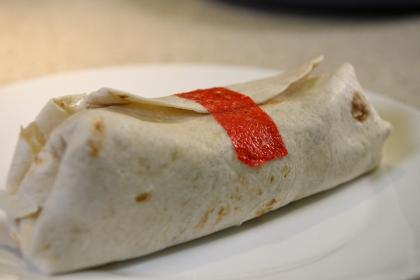 "We would get a product that looked exactly like tape, and we'd be like, 'This is it, we're done,'" Guarino says. "And then we went to use it and it would disintegrate, or it would have a weird texture or a funky taste to it. There were definitely a few bumps in that regard."

After the team presented the product at Design Day, the media coverage began.

"From that day on, there were too many exciting experiences to count," Walsh says.

Those experiences included being interviewed by Ryan Seacrest and featured in news outlets across the globe, including CNN, Newsweek, Today, NPR, and Univision—which required Eric to dust off her high school Spanish skills.

"They did a pre-interview with me and realized I wasn't as comfortable in my Spanish skills, so they had me record a video that I was able to pre-script beforehand," Eric says. "I wish I would have practiced my Spanish a little bit more before that happened, but ultimately it worked out and people got to hear about us internationally, which is amazing."

While media outlets took off with the story, the Tastee Tape team had to balance finishing their senior year studies, preparing for Commencement, and seeing their families that had come to Baltimore from across the country, all while juggling media interviews. Guarino's pre-Commencement celebratory lunch was interrupted by an interview. Walsh remembers her phone buzzing during the ceremony with another media request. Later, Commencement speaker Samantha Power gave the team a shoutout during her speech.

"My parents got a kick out of that one," Guarino says.

"Even if nothing comes of this—which is not our plan—I think the learning process and experience itself is so rewarding, and I'm glad that I could be a part of it."
Marie Eric

Balancing it all was easier as part of a team, they say, as they had each other to lean on during that time. While they all knew of each other through their classes prior to the product design course, the class was the first time they had a chance to really get to know one another. Combine the need for an innovative project, endless attempts at prototyping, and a slew of media requests, and it makes for a unique bond.

"Although it was a stressful time and also a funny time, I think it just grows your relationship with your team much more," Eric says. "The fact that we had this shared experience that was totally unfamiliar to all of us, I think it grew our friendships a lot more in the process."

The team members were grateful to have support from their families and their friends outside of the project as well, and their supporters were dedicated to sending them every media mention or funny tweet they could find. While social media comments weren't always kind, the team remained unfazed, with Eric mentioning that the negative comments often got drowned out in favor of the fun coverage they got to participate in. Nie is also grateful for the platform the team received to spread the word about the value of STEM education.

"The group and I have the privilege of showcasing what women in STEM can do," Nie says. "We're so lucky that a funny tagline and a few seconds on a popular late-night show have given us not only the opportunity to move forward on this venture but also the stage to talk about an important topic." 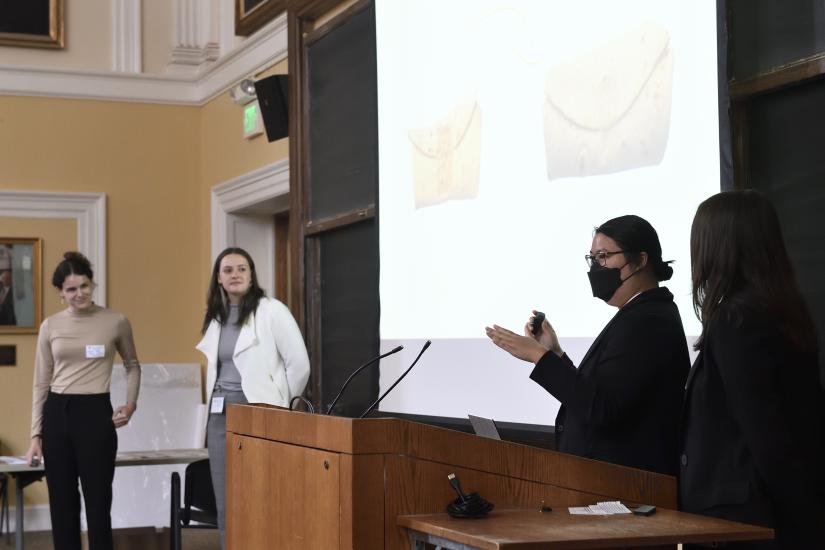 Looking ahead, the team was recently accepted into the Fuel Accelerator at FastForward U, which will provide resources, mentorship, and guidance as they seek to eventually bring Tastee Tape to the consumer market. The team is also working to refine the recipe for Tastee Tape before filing for a nonpreliminary patent, with hopes of filing by July 2023. While they each say they weren't initially thinking of continuing with Tastee Tape past the product design course, the viral nature of the product opened doors they didn't initially think were possible.

"Entrepreneurship was never something that I thought was on the table for me and going through this process—starting to build a business and venture—has opened up that world to me," Eric says. "Even if nothing comes of this—which is not our plan—I think the learning process and experience itself is so rewarding, and I'm glad that I could be a part of it."