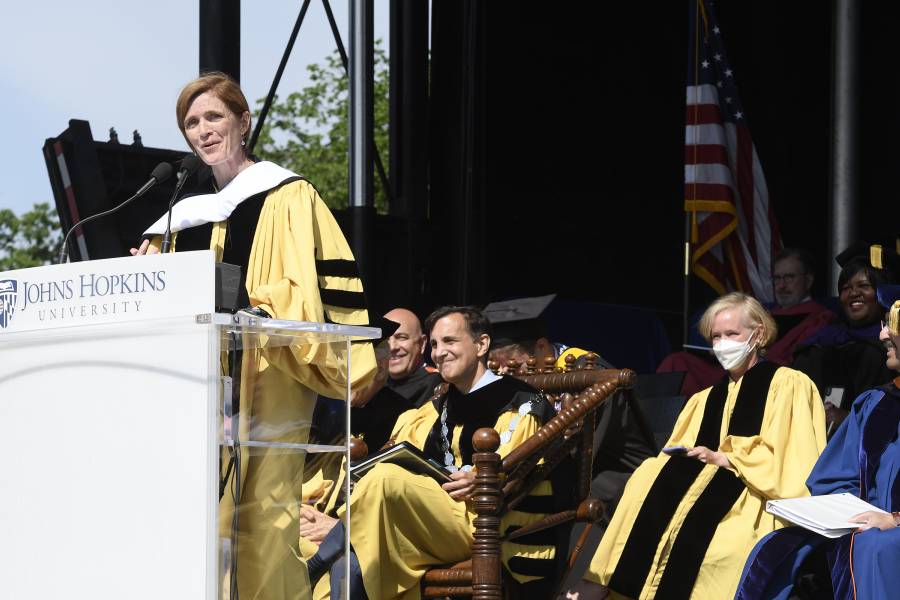 Samantha Power urges graduates to 'focus on a calling, not a career'

Commencement speaker Samantha Power challenged the Johns Hopkins University Class of 2022 to be open to embracing new directions in life even if that means diverging from their intended career plans.

In remarks to graduates at Homewood Field on Monday morning, Power—administrator of the U.S. Agency for International Development (USAID), former U.S. ambassador to the United Nations, and a Pulitzer Prize–winning author—offered up her own backstory as an example, sharing that she aspired to be a professional athlete and then pivoted to sports broadcasting before seeing news coverage of college students her age protesting the Chinese government in Tiananmen Square in 1989.

"I saw raw footage coming from Beijing that stopped me in my tracks and changed the trajectory of my life," Power said. "The plan I had to be a sportscaster suddenly felt inadequate to the challenges facing the world. I no longer had a career, but for the first time, I had something that I hadn't actually known I was missing—not a career path, but a real-world calling. I wanted to stand, if not literally in front of tanks, on the side of those fighting for their dignity and freedom."

While we all crave certainty, Power said, it's an illusion.

"Over the course of your life, the best way to grapple with uncertainty is to focus on a calling—not a career, a calling," Power said. "As terrifying as that uncertainty might feel it is through embracing uncertainty that one discovers life's most rewarding gifts.

"Your calling need not be clear at this moment and it also need not be epic," she added. "Your calling can be that thing you fight for. It can be that inequity you can't live with, that emotion that overwhelms you, that circumstance that forces you to act, or it can be the change you make on a much more intimate scale—the fight to provide for a better life for your family or a community."

At USAID, Power leads the world's premier international development agency and its global staff of over 10,000 people working in 100 countries around the world to drive progress on issues including food security, education, women's empowerment, and global health. She has focused on helping the U.S. respond to a range of challenges, including the COVID-19 pandemic and efforts to surge global vaccinations; climate change; conflict and humanitarian crises; and supporting democratic societies, peaceful civic movements, and human rights. Power is also the first USAID administrator to be a member of the National Security Council. Prior to joining the Biden administration, Power was a professor at Harvard Kennedy School and Harvard Law School.

At Monday's ceremony, Power was one of seven recipients of an honorary doctor of humane letters degree. 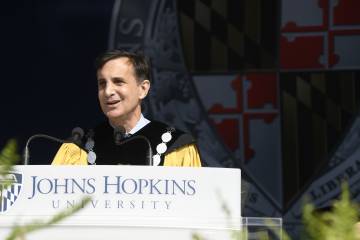 Daniels: 'Never underestimate the impact your actions can have'

Published May 23, 2022
While we often look to community and global leaders as examples of how to rise to critical moments, 'we are all capable of lives of quiet heroism,' he tells graduates 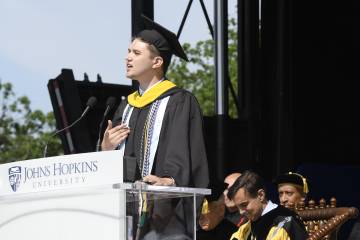 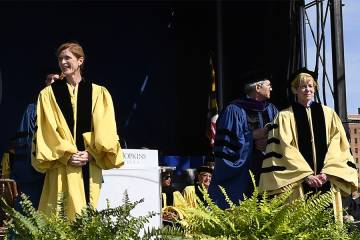