The pandemic has reached a plateau, but for how long?

Johns Hopkins health security expert Tom Inglesby provides an update on the state of the pandemic and how vaccination, funding, and variants may affect its future

The U.S. appears to have reached a plateau with the omicron subvariant that's surged this spring, but it's too early to know if positive trends will stick, according to Tom Inglesby, who recently returned to his role directing the Johns Hopkins Center for Health Security after serving as a senior adviser to the White House COVID-19 Response Team since January.

"It's good news that these numbers seem to have plateaued nationally," Inglesby said during a virtual briefing Wednesday, noting that cases are declining in the Northeast and Midwest. But "it's not possible to say that this surge has peaked for sure," he said, as cases in the South and West continue to rise, as do hospitalizations nationwide. "Not all plateaus stay plateaus," he said.

Fortunately, the latest COVID-19 spike—driven by the BA.2.12.1 omicron subvariant—has resulted in fewer hospitalizations and deaths overall than the original omicron wave this winter, Inglesby said.

But he said he's concerned that one-third of the U.S. remains not fully vaccinated and two-thirds remain without a booster shot. An average of about 265 Americans continue to die from COVID-19 every day. "It's important to see how much work remains to be done to diminish the impact of COVID, and to see that COVID is still posing a substantial threat to health and life for many, many Americans," he said.

The potential impact of two emerging omicron subvariants—known as BA.4 and BA.5—remains unclear, according to Inglesby. It's possible they could create "some level of surge beyond what we see now, or at least slow down the return to a lower baseline of cases," he said, but "it's too soon to say whether that will happen." The two subvariants have already caused COVID-19 spikes in some parts of the world, including Portugal and South Africa.

In the U.S., it does appear that these subvariants are "rising fairly rapidly as a percentage of the overall cases in the country, in some regions more than others," Inglesby said, adding that we don't yet know whether previous infections with the BA.2.12.1 subvariant from this past spring will provide protection against the new strains.

While the U.S. currently has more tools for battling COVID-19 than ever before—including vaccines, antiviral treatments like Paxlovid, and a focus on improving ventilation of buildings—Inglesby said increased support from Congress is critical and long overdue. Currently, the Biden administration continues to wait for Congress to act on a stalled COVID-19 relief package worth billions of dollars.

"We need congressional support to sustain those tools, funding to develop new vaccines to cope with variants, to fund treatments, to fund testing infrastructure and international response," Inglesby said.

Inglesby said it's possible that COVID-19 will evolve to behave more like the flu, requiring yearly vaccinations. But the average American is likely to experience "less sickness, much less death," he said—emphasizing that this means a smaller impact from COVID-19, but that doesn't mean zero impact.

It's also possible that the virus "will evolve in ways that are challenging—new variants that emerge that require either different vaccines or boosting to protect people after fading immunity," he said. He noted the quick and unexpected onset of the delta variant in 2021 as well as the original omicron wave this past winter. "I think for people [to] make predictions beyond a few months… that's pretty difficult to do."

Some are expecting new surges next winter and fall, possibly more serious than our current situation, Inglesby said. "It's far too soon to say that we are rounding the corner with COVID," he said. "We have better tools than we've had before, we can continue to drive down the impact of COVID, but COVID is going to be with us for some time into the future." 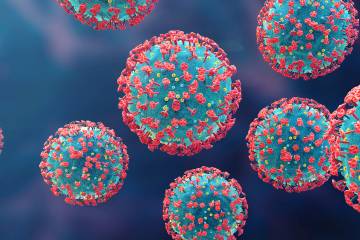 Taking the temperature of the pandemic

Published May 16, 2022
As the U.S. reaches one million COVID-19 deaths, where are we in the arc of the pandemic? Epidemiologist David Dowdy explains.