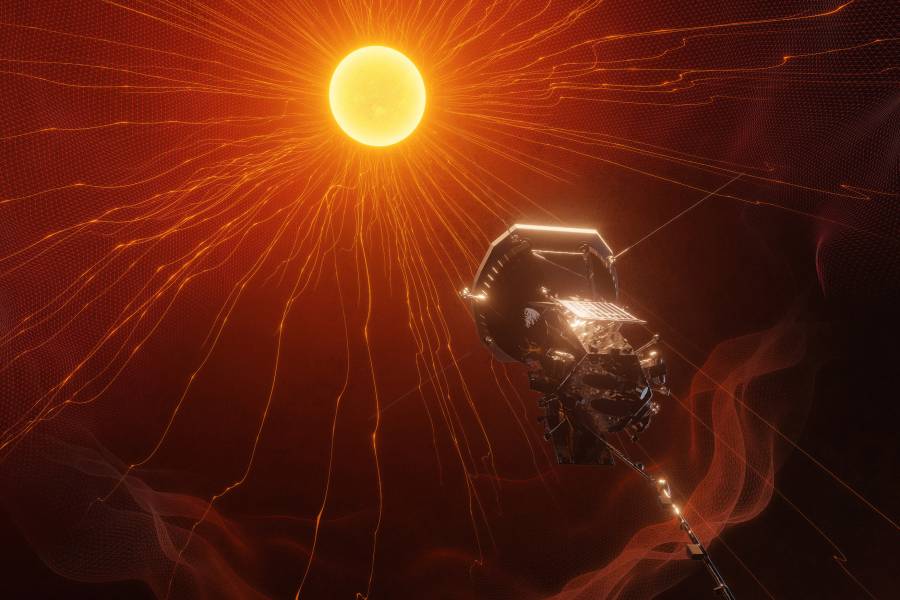 The spacecraft, built and operated by APL, has made its first pass through the sun's upper atmosphere, an area called the corona

For the first time in history, a spacecraft has touched the sun.

NASA's Parker Solar Probe has now flown through the sun's upper atmosphere—called the corona—sampling particles and characterizing magnetic fields in this dynamic environment.

The new milestone marks one major step for Parker Solar Probe and one giant leap for solar science. Just as landing on the Moon allowed scientists to understand how it was formed, touching the sun is helping scientists uncover critical information about our closest star and its influence on the solar system. Results from this feat were announced Tuesday in a press conference at the 2021 American Geophysical Union fall meeting in New Orleans and have been accepted for publication in Physical Review Letters and the Astrophysical Journal.

"This is truly the first time a spacecraft has touched the atmosphere of our sun," said Thomas Zurbuchen, associate administrator for NASA's Science Mission Directorate at the agency's headquarters in Washington. "It's a monumental moment for solar science."

As it circles closer to the solar surface, Parker Solar Probe—built and operated by the Johns Hopkins Applied Physics Laboratory—is making discoveries that other spacecraft were too far away to see, including from within the solar wind, the flow of particles speeding from the sun that can influence Earth.

The first passage through the corona—as well as more flybys to come—will provide data on phenomena that are impossible to study from afar.

"Flying so close to the sun, Parker Solar Probe now senses conditions in the corona that we never could before," said Nour Raouafi, the Parker Solar Probe project scientist at APL. "We see evidence of being in the corona from magnetic field data, solar wind data, and visually in white-light images. We can actually see the spacecraft flying through coronal structures that can be observed from Earth during a total solar eclipse."

Closer than ever before

Fortified to withstand some of the most extreme conditions in the solar system, Parker Solar Probe launched in 2018 to explore the mysteries of the sun by traveling closer to it than any spacecraft before.

Unlike Earth, the sun doesn't have a solid surface, but it does have a superheated atmosphere made of material bound to the sun by gravity and magnetic forces. As that material gets pushed away from the sun by rising heat and pressure, it reaches a point where the gravitational forces and magnetic fields are too weak to contain it. 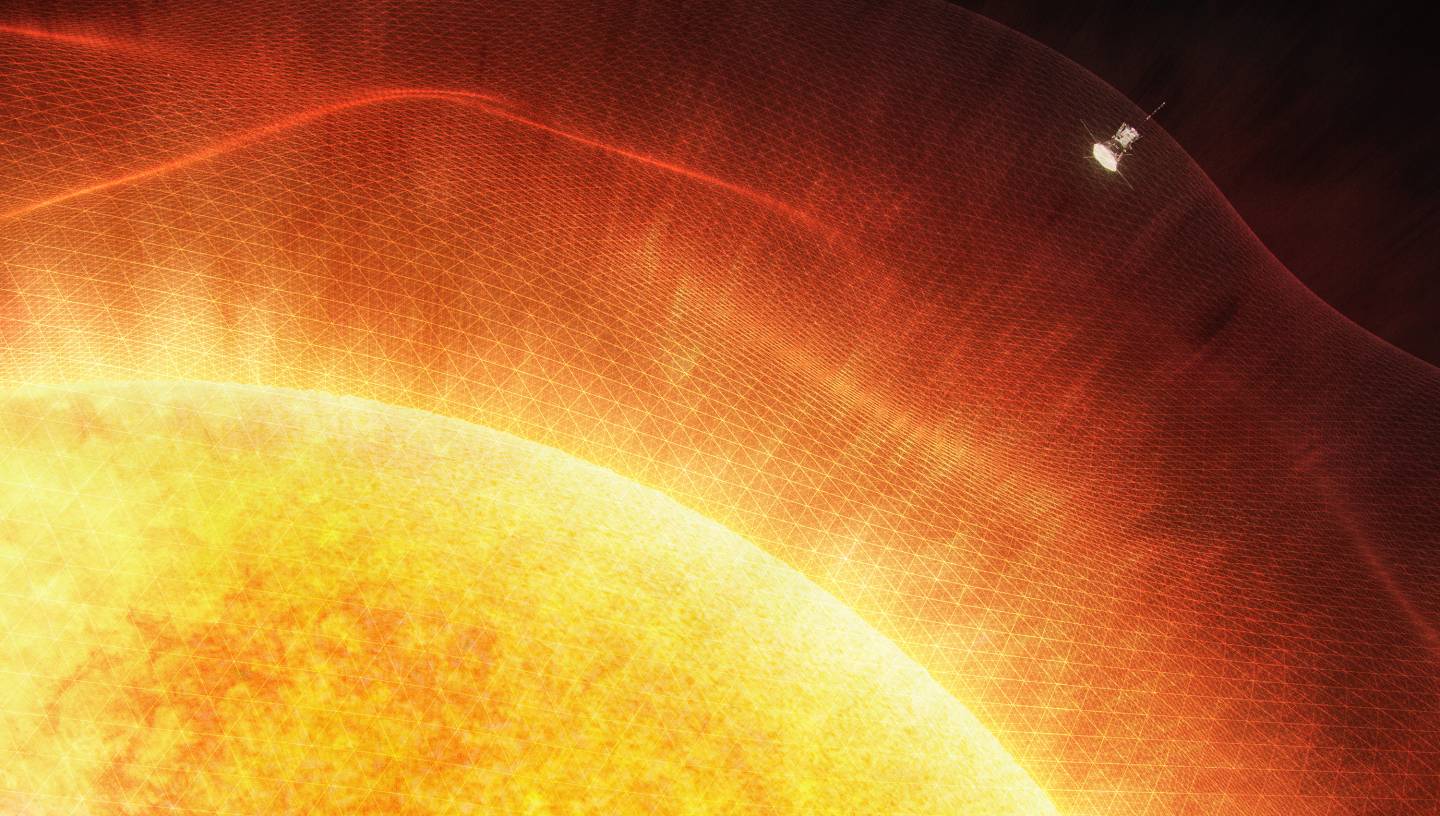 Until now, researchers were unsure exactly where the Alfvén critical surface lies. Estimates based on remote images of the corona had put it somewhere between 10 and 20 solar radii from the surface of the sun— 4.3 to 8.6 million miles. Parker Solar Probe's spiral trajectory gradually brings it closer to the sun, and during the last few passes, the spacecraft was consistently within 20 solar radii (93% of Earth's distance from the sun), theoretically putting it in the position to cross the boundary.

Finally, on April 28, 2021, during its eighth flyby of the sun, Parker Solar Probe cut through. Encountering the specific magnetic and particle conditions of the Alfvén critical surface at 18.8 solar radii (8.127 million miles) above the solar surface, scientists knew the spacecraft had finally entered the solar atmosphere.

"We were fully expecting that, sooner or later, we would encounter the corona for at least a short duration of time," said Justin Kasper, lead author on a new paper about the milestone accepted for publication in Physical Review Letters, and deputy chief technology officer at BWX Technologies Inc. "But it is very exciting that we've already reached it."

Into the eye of the storm

As Parker Solar Probe later dipped to just 14.97 solar radii (6.4714 million miles) from the sun's surface, it passed through a feature in the corona called a pseudostreamer. These massive structures rise like ribbons above the sun's surface and are visible from Earth during solar eclipses.

Passing through the pseudostreamer was like flying into the eye of a storm. Inside the pseudostreamer, the conditions quieted, particles slowed, and the number of switchbacks dropped—a dramatic change from the busy barrage of particles the spacecraft usually encounters in the solar wind.

For the first time, the spacecraft found itself in a region where the magnetic fields were strong enough to dominate the movement of particles. The particles were trapped at the sun; these conditions were the definitive proof the spacecraft had passed the Alfvén critical surface and entered the solar atmosphere where magnetic fields shape the escape of the wind.

The first passage through the corona, which lasted only a few hours, is one of many planned for the mission. Over the next four years, Parker Solar Probe will eventually reach as close as 8.86 solar radii (3.83 million miles) from the surface. Upcoming flybys, the next of which is happening in January 2022, will likely bring Parker Solar Probe through the corona again.

"I'm excited to see what Parker Solar Probe finds as it repeatedly passes through the corona in the years to come," said Nicky Fox, director for NASA's Heliophysics Division at NASA Headquarters in Washington, D.C. "The opportunity for new discoveries is boundless."

The size of the corona is also driven by solar activity. As the sun's 11-year activity cycle—the solar cycle—ramps up, the outer edge of the corona will expand, giving Parker Solar Probe a greater chance of being inside the corona for longer periods of time.

"It is a really important region to get into because we think all sorts of physics potentially turn on," Kasper said. "And now we're getting into that region and hopefully going to start seeing some of these physics and behaviors."

Image caption: The Parker Solar Probe aims to untangle the long-standing mysteries of the complex solar environment such as the activity in the magnetic field embedded in the solar wind.

Some surprising physics are already surfacing. On recent encounters, Parker Solar Probe collected data showing that one spot where switchbacks originate is at the visible surface of the sun—the photosphere.

By the time it reaches Earth, the solar wind is a steady and turbulent headwind of particles and magnetic fields. But as it escapes the sun, the solar wind is structured and patchy. In the mid-1990s, the NASA-European Space Agency mission Ulysses flew over the sun's poles and discovered a handful of bizarre S‑shaped kinks in the solar wind's magnetic field lines, which detoured charged particles on a zig-zag path as they escaped the sun. For decades, scientists thought these occasional switchbacks were oddities confined to the sun's polar regions.

In 2019, though, at 34 solar radii from the sun, Parker Solar Probe discovered that switchbacks were not rare but common in the solar wind. That finding renewed interest in the features and raised new questions: Where are the switchbacks coming from, and how do they form and evolve? Were they forged at the surface of the sun, or shaped by some process kinking magnetic fields in the solar atmosphere?

The latest findings, in press in the Astrophysical Journal, finally confirm the switchbacks originate near the solar surface.

The clues came as Parker Solar Probe orbited closer to the sun on its sixth flyby, less than 25 solar radii out. Data showed switchbacks occur in patches and have a higher percentage of helium—an element known to come from the photosphere—relative to other elements. The switchbacks' origins were further narrowed when the scientists found the patches aligned with magnetic funnels that emerge from the photosphere, between convection cell structures called supergranules.

"The structure of the regions with switchbacks matches up with a small magnetic funnel structure at the base of the corona," said Stuart Bale, professor at the University of California, Berkeley, and lead author on the new switchbacks paper. "This is what we expect from some theories, and this pinpoints a source for the solar wind itself."

In addition to being the birthplace of switchbacks, the scientists think the magnetic funnels might be where one component of the solar wind originates. The solar wind comes in two different varieties—fast and slow—and the funnels could be where some particles in the fast solar wind come from.

Understanding where and how the components of the fast solar wind emerge, and if they're linked to switchbacks, could help scientists resolve a longstanding solar mystery about how the corona is heated to millions of degrees.

While the new findings locate where switchbacks are made, the scientists can't yet confirm how they're formed. One theory suggests they might be created by waves of plasma that roll through the region like ocean surf. Another contends they're made by an explosive process known as magnetic reconnection, which is thought to occur at the boundaries where the magnetic funnels come together.

"My instinct is, as we go deeper into the mission and lower and closer to the sun, we're going to learn more about how magnetic funnels are connected to the switchbacks," Bale said, "and hopefully resolve the question of what process makes them."

Now that they know what to look for, the scientists are watching for more clues as Parker Solar Probe makes closer passes. The data to come will allow scientists a glimpse into a region that's critical for superheating the corona and pushing the solar wind to supersonic speeds. Such measurements from the corona will be critical for understanding and forecasting extreme space weather events that can disrupt telecommunications and damage satellites around Earth.

"It's really exciting to see our advanced technologies succeed in taking Parker Solar Probe closer to the sun than we've ever been, and to be able to return such amazing science," said Joseph Smith, Parker Solar Probe program executive and scientist at NASA Headquarters. "We look forward to seeing what else the mission discovers as it ventures even closer in the coming years."