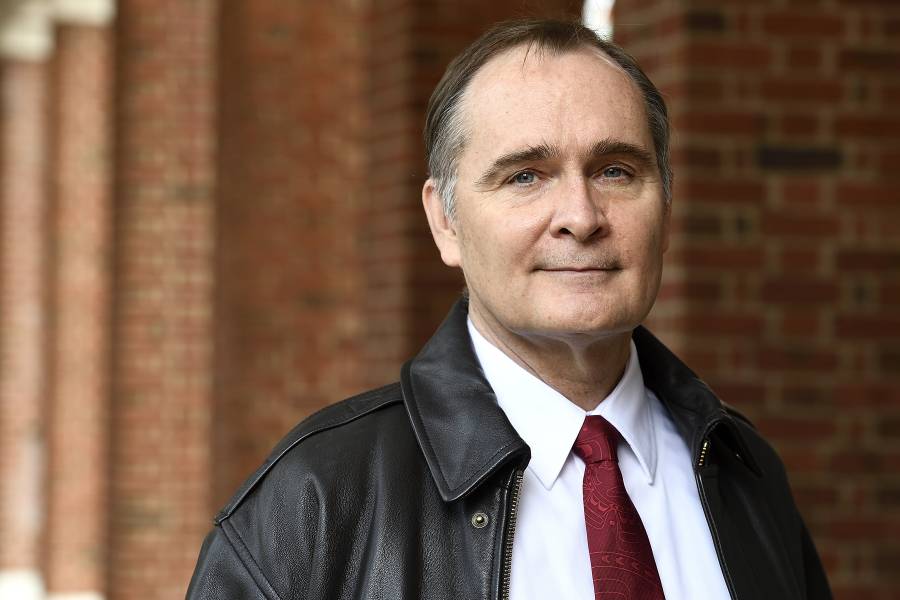 James Bellingham didn't begin his career working on autonomous underwater vehicles with a plan for going to sea. In fact, he started out in astronomy, intending to go into the space sciences. While he still takes to the skies in his free time as a hobby pilot, he was increasingly drawn to underwater robotics during his PhD. But after designing his first underwater robots, Bellingham realized that if he didn't bring them to the sea, nobody would.

So, when space opened on the Nathaniel B. Palmer, a 308-foot-long icebreaker, for its first geophysical cruise to Antarctic waters just weeks before its departure from Chile in December 1992, Bellingham and his lab quickly packed up their robots. With such short notice, they would have to reassemble them on board. The Palmer, which accommodates up to 37 scientists in addition to its 22 crew members and is still active today, took Bellingham to the Bellingshausen Sea, an area along the west side of the Antarctic Peninsula. As the ship approached land a couple of weeks into the cruise, Bellingham remembers the moment that changed the course of his career.

"I was out on deck, and I was all alone," Bellingham says. "It was foggy and gray overhead. All our overboard equipment was broken. As we got closer to the edge of the ice, I started seeing these wave motions as the ship and ice sheet undulated in the slow rolls coming in from the open ocean. And I looked at this challenging and spectacular environment and thought, 'I just have to get out here again.' And that was the moment when I switched from doing all my work in the lab to realizing that seagoing is where I wanted to be."

Since that fateful first trip, Bellingham has spent several months each year at sea and has led 20 AUV expeditions to the Antarctic, North Atlantic, Mediterranean, South Pacific, and Arctic oceans. He now joins Johns Hopkins University as a Bloomberg Distinguished Professor of Exploration Robotics. He holds primary appointments in the Department of Mechanical Engineering of the Whiting School of Engineering and the Asymmetric Operations Sector of the Applied Physics Laboratory and is the executive director of the Johns Hopkins Institute for Assured Autonomy.

AUVs—small, high-performance robots that travel underwater without requiring input from an operator—are widely used in science, industry, and the military as they are less expensive, have longer endurance, and result in higher quality data than human-occupied vehicles. They are employed, for instance, to inspect underwater infrastructure and map the seafloor. But when an AUV descends below the ocean waves, radio connectivity—and thereby communication—as well as navigation systems is lost. These robots must therefore be able to independently traverse underwater environments and track their location—an essential part of data collection so that the samples are meaningful to the scientists analyzing them later. Bellingham has long been focused on high-level control, energy management, and vehicle integrity. His innovative work has been instrumental for underwater observation and has provided a new toolbox for accessing previously unexplored parts of the deep ocean.

In recent years, Bellingham's focus has shifted to developing teams of robots to study ocean processes. Reliability of the autonomy is a particularly challenging aspect of these systems, with costly sea trials devoted to testing the individual robots and incrementally proving the reliability of the robots as a team. Bellingham realized that most of the creative energy and expense was going to validating the autonomous aspects of the robots—in brief, that the quality assurance problem had moved to the forefront of his work.

Thinking beyond the technical aspects of autonomy, Bellingham is also interested in the ethical questions that autonomous systems bring about. He hopes to address some of these as the director of the Institute for Assured Autonomy, which is a national center of excellence that aims to ensure the safe integration of autonomous systems into society by covering research across technology, ecosystem, and policy and governance.

"Jim Bellingham is a pioneer in the autonomous marine robotics field and we are so pleased to have him leading the university's Institute for Assured Autonomy," says Ralph Semmel, director of the Applied Physics Laboratory. "He brings a unique understanding of the challenges and opportunities the world faces with autonomous systems, which are rapidly becoming a part of our daily lives."

Because of the ubiquity of autonomous systems, Bellingham says it is important to consider potential consequences and ethical guidelines for autonomous decision making.

"It's not enough to ask, 'Does a system do what you designed it to do?'" says Bellingham. "You also have to consider if what you designed it to do is the right thing to do. Autonomous and intelligent devices are, in many ways, the center of people's lives—from the talking gadget on your table to the car you drive, to the advertisements that show up on your computer that affect how you view the world and how the world reacts to you. In the case of autonomous systems, unintended consequences can be quite dramatic, so you need an ethical framework to help you make rational decisions. These are the profound conversations that are being had about the use of autonomy and the bigger issues the Institute for Assured Autonomy is taking on."

This focus on the ethics of autonomy has earned Bellingham a reputation as a leader in the field.

"Jim Bellingham not only works at the cutting edge of AUV research, but he is also committed to taking an interdisciplinary approach to research that considers the implications and ethics of the technology he is advancing," says Sunil Kumar, JHU provost. "This commitment is what makes him a perfect addition to the cadre of interdisciplinary scholars that make up the Bloomberg Distinguished Professors. We welcome him as a BDP and as the director of the Institute for Assured Autonomy."

Adds Ed Schlesinger, dean of the Whiting School: "Jim's proven ability to lead complex, cross-disciplinary initiatives in areas ranging from industrial applications, to defense, energy, and arctic exploration, as well his global reputation as a pioneer in autonomous robotics, is precisely what will make him such an effective Bloomberg Distinguished Professor and inaugural director of the Institute for Assured Autonomy. Jim's role at Johns Hopkins is already inspiring ideas for new collaborations, research initiatives, and external partnerships, all of which hold tremendous promise to advance the impact Johns Hopkins has on the world."

Bellingham's interdisciplinary collaborations have already yielded promising scientific discoveries. He teamed with marine microbiologists to develop new ways to study the communities of microbes found in every drop of ocean water that perform crucial functions such as producing oxygen and forming the foundation of the food web. These organisms do not respond well to the usual methods of study and die when isolated in a monoculture in a petri dish. As a consequence, they cannot be taken to the laboratory. Bellingham worked with his colleagues to bring their lab instruments to the ocean to study these organisms in their natural environments. He developed AUVs with high endurance that, when equipped with the Monterey Bay Aquarium Research Institute's Environmental Sample Processors, conducted molecular probes by filtering water samples and extracting DNA or RNA for analysis. The endurance and mobility of Bellingham's AUVs have enabled sophisticated studies of the ocean as a living system, allowing scientists to follow the same community of microorganisms over time and observe how they evolve and respond to their environments.

This research, Bellingham says, is critical for understanding the impacts of climate change.

"Some of the central problems of climate change really revolve around our understanding of the ocean environment, including its microorganisms, and there are so many things that are still unexplored or unknown," Bellingham says. "Most of the carbon dioxide that we're generating and putting into the atmosphere will end up in the ocean. Understanding the oceanic uptake of carbon and how that's going to change the ocean over time is key. These autonomous marine robots enable investigation of some of the greatest global climate problems. The growing applications for autonomous systems in the ocean environment make this a tremendously rich and rewarding area to work in. It has a lot of tough and important problems that have big impacts on society as a whole."

At Johns Hopkins, Bellingham says he is excited to collaborate with experts from across the university who work on autonomy in a range of capacities, many of whom use it as a solution to pressing societal problems such as food deserts or mobility issues. Bellingham says that discussions with colleagues so far have been transformative in getting him to think about the larger picture of the impact of autonomous systems on our lives.

"I cannot think of a time when I've come out of a conversation with a colleague at Johns Hopkins without a list of six things to read, more people to meet, and oftentimes a complete mental shift in how I think about a problem," Bellingham says. "You have people from such a wide range of fields of application that have all these different ways of looking at the autonomy challenge, and figuring out how to work together more effectively is an exciting part of what we need to do institutionally to really rise to the next level."

Bellingham received his BS, MS, and PhD in physics from the Massachusetts Institute of Technology, where he founded the Autonomous Underwater Vehicles Laboratory. He has held leadership roles at Bluefin Robotics and Monterey Bay Aquarium Research Institute and joined Johns Hopkins from the Woods Hole Oceanographic Institution, where he was founding director of the Consortium for Marine Robotics.

As a Bloomberg Distinguished Professor, Bellingham joins an interdisciplinary cohort of scholars working to address major world problems and teach the next generation. The program is backed by a gift from Michael R. Bloomberg, a Johns Hopkins alumnus, founder of Bloomberg LP and Bloomberg Philanthropies, World Health Organization Global Ambassador for Noncommunicable Diseases and Injuries, United Nations Secretary-General's Special Envoy for Climate Ambition and Solutions, and 108th mayor of New York City. 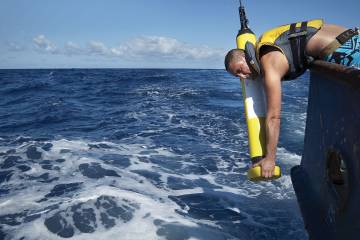 Published Summer 2021
Inside the oceans, autonomous floats take the temperature and pulse of our changing saltwater world. Two Hopkins alums helped send this fleet on its way. / Johns Hopkins Magazine