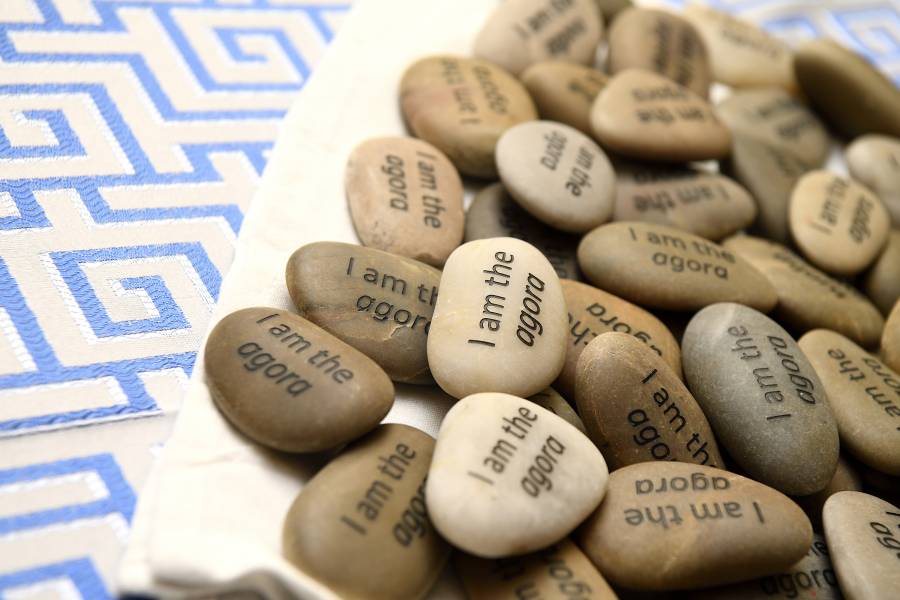 Development of the SNF Agora Institute at Johns Hopkins took a major step on Nov. 15, when its first cohort of endowed professors were formally installed. This happened against the backdrop of progress on the building that the institute will eventually call home. Construction fencing has been erected, heavy-duty vehicles and machinery are in position, and site excavation has commenced.

That progress and the eight endowed SNF Agora Institute Professors were recognized at "Join the Agora: A Celebration of Faculty and Facilities," where an enthusiastic group of faculty and supporters gathered at Mason Hall to witness the installation of the professors and to raise a toast to what will be a gleaming new space.

"We could not be more pleased to have this extraordinary group of scholars with us at Hopkins to shape the SNF Agora, to sharpen our shared understanding of the challenges facing democracy, and to advance bold, evidence-based solutions that can begin to remedy those challenges," said JHU President Ron Daniels. He concluded, "This faculty and this institute are moving reminders of the vital and indispensable work of universities like ours and the contributions we have to make to democracy."

In addition to Daniels, participants in Monday's event included Christopher S. Celenza, James B. Knapp Dean, Krieger School of Arts and Sciences; Hahrie Han, inaugural director of the SNF Agora Institute, and professor in the Department of Political Science; and Andreas Dracopoulos, co-president of the Stavros Niarchos Foundation (SNF), and a member of the Johns Hopkins University Board of Trustees.

"At the core of the SNF Agora Institute are three driving elements: discovery, design, and dialogue," Celenza said as he formally presented the SNF Agora Institute Professorships to the university. "Our scholars discover new avenues to understanding democracy; they collaborate with others to design ways to translate and apply academic research in ways that can make a real-world impact; and they initiate productive dialogue to bridge divides and share new knowledge with students and the broader public."

SNF Agora, founded in 2017 with a visionary $150 million grant from the Stavros Niarchos Foundation (SNF), is an academic and public forum dedicated to strengthening global democracy through powerful civic engagement and informed, inclusive dialogue. The name comes from the ancient Athenian agora—a marketplace that became the heart of democratic governance in Athens by providing a forum for debate, disagreement, and deliberation. The institute aims to renew the promise of the agora in modern times, by creating a vibrant space for the contestation of ideas and offering evidence-driven tools for effective participation in the democratic project.

As part of the celebration, guests were invited to join the SNF Agora community by signing stones inscribed with the phrase "I am the agora"—a creative nod to the similarly inscribed boundary stones that demarcated the Athenian agora. Members of the Johns Hopkins community were asked to sign stones, and Baltimore City elected officials and community leaders will be invited to do so as well. All of the signed stones are intended for an art installation in the new building.

"The work of the institute will always be evolving to integrate new voices and new knowledge," said Han, SNF Agora Institute director. "We might make some mistakes along the way, and that's part of the process of experimentation that keeps our work dynamic. As long as we remain open, we will learn as we go and be better able to take on the next big, challenging idea."

Following the presentation of the professors, guests repaired to Mason Hall's west patio, which was decorated with border stones to echo the ancient agora as well as with large images of the building design. The signed stones were placed in a vessel that will eventually be installed in the new building.

"Each stone, and each signature, signifies our individual and collective civic engagement in the community and our shared belief that inclusive dialogue is the cornerstone of a robust global democracy," said Celenza.

Celenza then led the gathering in toasting the Wyman Park Drive/Remington Avenue site where the building, designed by renowned Italian architect Renzo Piano, will rise in the coming months. As they looked over at the site from the patio, festive fireworks marked the corners of the future structure.

Scholarship by the inaugural professors spans a wide range of topics, including political polarization, civil discourse and civic engagement, the changing politics of information flows in our globalized world, race and inequality, the role of science in society, the ability of people to work across difference, political violence, and voting rights reform. The scholars are: 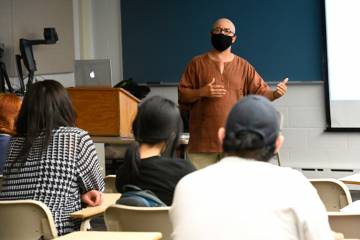 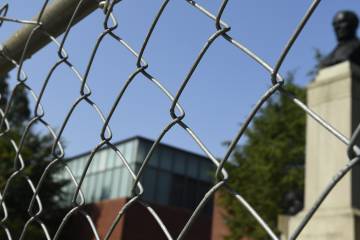 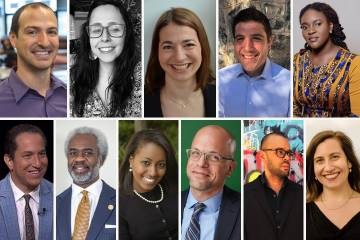 Published May 11, 2021
The new cohort will collaborate with members of the Johns Hopkins community on projects that further the institute's mission to foster global democracy