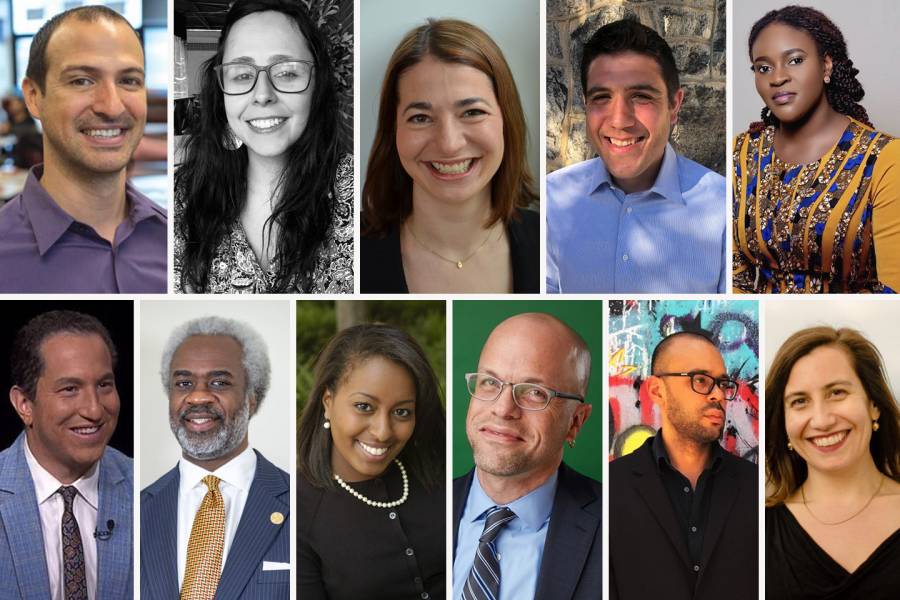 The Stavros Niarchos Foundation Agora Institute at Johns Hopkins has selected 11 Visiting Fellows from diverse sectors, backgrounds, and disciplines to collaborate with faculty, senior fellows, and students during the upcoming academic year on projects that further the institute's mission.

Established in 2017, the SNF Agora Institute is an academic center and public forum that is dedicated to improving and expanding civic engagement and informed, inclusive dialogue as the cornerstone of global democracy. The institute has hosted individual Visiting Fellows in the past, but this is the first group of Visiting Fellows to be offered residency at the institute as a cohort. SNF Agora Institute director Hahrie Han calls the cohort-based approach a chance to bring a "critical mass of practitioners and scholars" to the Johns Hopkins community.

"The Visiting Fellows program allows us to bring a range of perspectives into the campus conversation, so that not just our faculty but Johns Hopkins students and the broader public will have the opportunity to engage with experts from a wide variety of backgrounds, professions, and perspectives," Han says. "The visiting fellows, who will be joining a group of new faculty at SNF Agora, will add to the intellectual scope of our work, enabling us to expand the reach of our research, teaching, and other activities."

The Visiting Fellows will be on campus at various points over the next academic year, with some spending the full year with the institute and others joining for portions of the fall or the spring. A select number of fellows will teach undergraduate courses at Johns Hopkins, while others will dedicate their time at the institute to furthering their research, practice, and scholarship. The cohort will participate in regular programming offered by the institute, while also convening their own symposia throughout the academic year.

Xavier Briggs is a nonresident senior fellow at the Brookings Institution and an expert on democratic governance, social change, pluralism and racial equity, economic opportunity and inclusive growth, and urban and regional development in the U.S. and abroad. An award-winning educator and researcher, he is also an experienced manager in philanthropy and government. Prior to his time at Brookings, Briggs served as vice president of the Ford Foundation, where he helped consolidate and launch the division of U.S. Programs, overseeing domestic programming in a wide range of areas including civic engagement and government and creativity and free expression. A frequent media source, Briggs' views have appeared in The New York Times, The Boston Globe, CNN, and other major media in English and in Spanish. (Joining fall 2021)

Rachel Donadio is a Paris-based writer and journalist, a contributing writer for The Atlantic, and a former Rome bureau chief and European culture correspondent for The New York Times. Based in Europe since 2008, she focuses on feature stories and profiles at the intersection of culture, politics, and religion, as well as literary reportage and criticism. She has reported from more than two dozen countries and has written about the social and political toll of the European debt crisis in Greece and Italy and the wave of populism that followed in its wake; the French satirical weekly Charlie Hebdo as its staff put out the first issue after a deadly terrorist attack; France's Yellow Vest movement; and the #MeToo movement, among other significant global stories. (Joining fall 2021)

Originally from Ethiopia, Yordanos Eyoel is a managing partner at New Profit, a venture philanthropy organization where she leads the organization's early-stage investment portfolio and network of around 100 organizations. In 2019, Eyoel founded New Profit's Civic Lab to invest in and grow innovative solutions building civic trust and an inclusive democracy in America. Shortly after becoming a U.S. citizen in 2016, Eyoel co-founded and served as the international spokesperson of the Sister March Network that mobilized more than 4 million people for the 2017 Women's March. Eyoel is the 2020 City of Boston Spark Impact Award winner and a fellow of the second class of the Civil Society Fellowship, a Partnership of ADL and the Aspen Institute. (Joining spring 2022)

Musa al-Gharbi is a Paul F. Lazarsfeld Fellow in Sociology at Columbia University. His research explores how knowledge is produced, transmitted and put to use (or not), how thought is shaped by people's commitments and social contexts, and the extent to which narratives about social phenomena seem to correspond with apparent realities "on the ground." He applies these lenses to a range of topics including race, inequality, social movements, extremism, policing, national security, foreign policy, and U.S. political elections. Al-Gharbi is also a strong proponent of public sociology, with essays and interviews published in The New York Times, The Washington Post, The Wall Street Journal, The Atlantic, The Nation, The Guardian, New Republic, CNN, NPR, and others. His first book, We Have Never Been Woke: Social Justice Discourse, Inequality and the Rise of a New Elite, is under contract with Princeton University Press. (Joining fall 2021)

Alexander Heffner is host of The Open Mind weekly TV series on PBS and daily podcast. He has covered American politics, civic life, and society since the 2008 presidential campaign. He has been profiled in The Washington Post, The New York Times, The Des Moines Register, Christian Science Monitor, Variety, Medium, and on C-SPAN, NPR, CNN, NBC, ABC, and the BBC. His writing has appeared in USA TODAY, WIRED, TIME, The Boston Globe, The Philadelphia Inquirer, The Daily Beast, and The Independent, among other publications. He is also coauthor of best-selling A Documentary History of the United States (Tantor Media, 2020; Penguin, 2018). (Joining spring 2022)

The Reverend Kobi Little is a strategic adviser, public policy advocate, and faith leader. He is currently exploring the theory and praxis of the prophetic ministry tradition and their implications for democracy building, justice advocacy, and equity advancement. He is the dean of Justice Chapel, serves as president of the Baltimore NAACP and vice president and political action chairman of the Maryland State Conference of the NAACP, and serves on the advisory council for Strong Future Maryland. He is also a leading voice on COVID-19 response and vaccine rollout in Maryland, focusing on sharing information, advocating for equity and human rights, and providing resources to address community needs. (Joining spring 2022)

Social activist and writer Farida Nabourema has emerged as the unequivocal voice of Togo's pro-democracy movement. She has been a fearless advocate for democracy and human rights in Togo since she was a teenager, and has authored hundreds of articles on her blog and elsewhere denouncing corruption and dictatorship, and promoting a form of progressive Pan Africanism. She is author of "La Pression de oppression" (The Pressure of Oppression) and executive director of the Togolese Civil League, an NGO that promotes democracy and human rights in Togo through grassroots organizing, civic education, and advocacy. (Joining spring 2022)

Sam Novey is Baltimore-based civic entrepreneur building diverse and long-lasting coalitions focused on expanding civic engagement at both the local and national level. He is co-founder of the Students Learn Students Vote Coalition, the largest non-partisan network in the country dedicated to increasing student voter participation. He is also a co-founder of the Baltimore Votes Coalition, which convenes community-based organizations in Baltimore City to promote full participation in elections. Other notable growing civic projects Novey has been involved in founding and designing include the ALL IN Campus Democracy Challenge, Party at the Mailbox, Maryland Civics Education Coalition, Ask Every Student, and the National League of Cities "Cities Vote" initiative. (Joining fall 2021)

Beatriz Rey is a PhD candidate in political science at the Maxwell School of Citizenship and Public Affairs at Syracuse University. Her research focuses on political institutions, policymaking, and research methods, with a concentration in Latin America and the United States. She will complete her degree in August 2021 after defending her doctoral dissertation on legislative effectiveness in Latin America. Rey is also a research fellow at American University's Center for Latin American and Latino Studies and a research assistant at the Qualitative Data Repository. She concurrently holds a position as a weekly columnist for the Brazil Report; more broadly, her policy commentary has been featured in outlets such as AP News, BBC Brazil, Estado de S. Paulo, and the Wilson Center. (Joining fall 2021)

Shayna Strom is a social impact leader who has held senior leadership positions in government, nonprofits, and philanthropic organizations. Recently, Strom was the chief deputy national political director at the American Civil Liberties Union, where she helped to build a new 75-person department that works on policy, issue campaigns, and grassroots organizing. She then served on the Biden-Harris transition team. Prior, she spent four years during the Obama administration in the White House Office of Management and Budget. She also served as counsel on the Senate Judiciary Committee for Senator Al Franken. Strom directed the early U.S. policy work at the Open Philanthropy Project, on behalf of one of the Facebook founders, and worked for a number of years as a community and political organizer. (Joining fall 2021)

Pablo Wolfe is a Washington D.C.-area educator who promotes civic education as a means to improve student engagement, celebrate student identity, and embolden the next generation of activists. In his roles as public-school administrator, staff developer with the Teachers College Reading and Writing Project, teacher, and parent, he has sought to make school a training ground for civic life. He is the co-author of The Civically Engaged Classroom: Reading, Writing, and Speaking for Change, and founder of the Coalition of Civically Engaged Educators, a network of civic-minded educators to share best practices that illustrate how civic knowledge, values, and behaviors improve student outcomes and transform schools. (Joining fall 2021)