Robert E. Slavin, a noted education researcher, the first-ever Distinguished Professor at the Johns Hopkins School of Education and director of the Johns Hopkins Center for Research and Reform in Education, died Saturday, April 24, of a heart attack. He was 70. 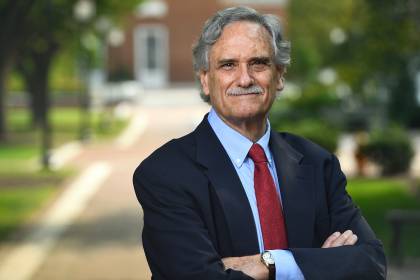 Image caption: Bob Slavin, a globally recognized education researcher and expert, held positions as a research scientist at Johns Hopkins after earning his doctorate in social relations from JHU in 1975. In 2004, he founded the School of Education's Center for Research and Reform in Education.

Slavin was a preeminent researcher at the School of Education and a globally recognized figure in the field. His personal mantra was a continual emphasis on "evidence-based" research as the driver of school reforms across the country—a phrase he often simplified as "what works" in education. Slavin was among a handful of education experts known by name worldwide. He was sought out regularly to testify before Congress and to weigh in on education reform in the national media.

"Bob had a unique ability to translate the science of learning into effective educational practices," said School of Education Professor Steven Ross, CRRE's evaluation director and one of Slavin's closest colleagues. "The tangible, enduring fruits of his scholarship are still being experienced by teachers and students worldwide. Notably, and admirably, his career-long focus has been on enhancing educational opportunities for disadvantaged and low-achieving students."

In the wake of the COVID-19 pandemic and the growing national focus on schools, Slavin's most recent efforts called for what he termed a "Marshall Plan" for education. As with the historic effort that returned Western Europe to stability in the aftermath of World War II, Slavin argued that no cost should be spared in accelerating student achievement in America's schools. He promoted a national tutoring corps to help students catch up after a year of lost learning.

Early in his career, he garnered national attention with his work on cooperative learning, in which small teams of students of differing abilities work together. Later, with his wife and Johns Hopkins colleague, Nancy Madden, he founded the Success for All Foundation in 1987, which promotes education programs that are "proven to help students succeed." Over the course of more than 30 years, Success for All has taught millions in disadvantaged communities to read as a cornerstone of their future success.

Ever the multidisciplinarian, eventually student health came under his purview. On the premise that many Baltimore students fared poorly in school because they had trouble seeing, and therefore reading, Slavin shaped the groundbreaking Baltimore Reading and Eye Disease Study with experts from Johns Hopkins, including the Wilmer Eye Institute. Begun in 2014, the study provided eye examinations and, where needed, glasses to 10,000 third- to eighth-grade children across the city. It became the largest-ever evaluation of its kind and spawned the ongoing Vision for Baltimore project, which has now screened more than 60,000 students and provided more than 7,500 eyeglasses to Baltimore children.

A sociologist by training, Slavin earned a BA from Reed College in 1972. Following a year of teaching children with disabilities at the Aloha Children's Center in Aloha, Oregon, Slavin entered graduate school at Johns Hopkins, where he earned his doctorate in social relations in 1975.

While Slavin was many things in his life, he was foremost a researcher driven to follow scientific evidence—if a program works, the data will confirm it, was his belief. He held successive positions as a research scientist at Johns Hopkins following his doctorate. In 2004, he founded the Center for Research and Reform in Education.

As an author, Slavin was prolific, writing or co-writing 24 books, including Educational Psychology: Theory and Practice, now in its 12th edition; Cooperative Learning: Theory, Research, and Practice; and Show Me the Evidence! Proven and Promising Programs for America's Schools. He also published more than 300 peer-reviewed papers and book chapters on a remarkable array of topics, ranging from school-based vision care to comprehensive school reform.

His personal blog, issued weekly and followed by thousands of educators worldwide, has more than 400 entries. He created and curated the Evidence for ESSA website, cataloging evidentiary support for the many potential reform programs schools might choose from to comply with 2015's Every Student Succeeds Act. The website has more than a million pages of content.

Slavin was showered with awards and professional recognitions throughout his career, including the American Educational Research Association's (AERA) Distinguished Contributions to Research in Education Award in 2019, the E. L. Thorndike Career Achievement Award by the American Psychological Association, and the Outstanding Leadership in Education Award from the Horace Mann League, among many other acknowledgments.

He was appointed a member of the National Academy of Education in 2009 and named an AERA Fellow in 2010. In August 2020, he became the inaugural Distinguished Professor in the School of Education.

"I had just checked in with Bob and Nancy on Friday afternoon. It was sunny and Bob was with a grandchild and in great spirits," said Christopher Morphew, dean of the Johns Hopkins School of Education. "The world has lost an incredible researcher and a resounding voice for effective education reform, and my colleagues and I have lost a mentor and friend. I can't believe he's gone."

Robert Slavin is survived by his wife and longtime partner in education research, Nancy Madden; their children, Jacob, Benjamin, and Rebecca; and grandchildren. The family has requested that in lieu of flowers, donations be made to the Center for Research and Reform in Education or the Success for All Foundation; cards may be sent to 300 E. Joppa Road, Suite 500, Baltimore, MD, 21286.