The team's flexible, snail-like robot is 'untethered' from a power source and controlled remotely, opening new possibilities for the burgeoning technology

The pink strip lies flat on a black-and-white checkerboard surface. It's rubbery—gummy, almost—and just thicker than an unrolled fruit leather snack. At a glance, the strip seems unremarkable.

Introduce heat, however, and the strip transforms. Arching and extending, it wriggles like an inchworm, contorting itself independently. Remove the thermal stimulus, and the strip returns to its original form.

It seems like magic, or at least a trick of the imagination, but it's really just chemistry. What looks like a rubber strip is a piece of phase-changing material made of liquid crystal elastomers, or LCEs. The material, which becomes an artificial muscle of sorts, is programmed to repeat the motion when triggered by a change in temperature.

"Soft robots enabled by LCEs are getting a ​lot of attention nowadays," said Zhiyong Xia, a polymetric materials expert at the Johns Hopkins Applied Physics Laboratory. "However, increasing the actuation speed and achieving autonomy of the robot are the key."

Image caption: The liquid crystal elastomer legs of the soft robot come alive when given a shot of thermal energy-inducing electrical current. One tap on the phone tells the robot to heat its legs and the snail inches forward on its own.

In a new paper published Jan. 8 in the journal Soft Robotics, a team of APL researchers took this feat a step further, demonstrating an LCE-based soft robot that is fully untethered from a power source and has Bluetooth control.

In the publication, the team explains its advancements using a snail-like robot. A large elastomer shell houses the machine's control panel and power source, in this case a battery. Four legs, just like those pink rubbery strips, sit out in front, each attached to a sawtooth foot for grip. The LCE legs come alive when given a shot of thermal energy-inducing electrical current—and the whole process is controlled by an iPhone. Tap the phone to tell the robot to heat its legs and the snail inches forward on its own. Over and over again.

"Soft robotics really offer unique features," Xia explained. "They're very flexible, as well as able to handle delicate objects, adjust to the environment and maneuver in areas rigid robotic structures wouldn't be capable of adapting to. They're also safer for advanced applications like human and machine teaming and adaptable wearable sensors."

Able to be autonomously powered and controlled and with durability even hard electronic robotic systems can't replicate, these machines could help expand robotic applications for delicate operations such as search and rescue, bomb defusing, and heading into dangerous places where "we don't want to send humans, but it would be difficult for hard robotics to operate," Xia said.

The uniqueness of these robots is in their design. "Shape morphing, changing modalities, enhanced survivability, and navigating through complex and constrained terrains," are among the benefits of soft robotics, the authors write. But before now, advances in the soft robot field have all required tethering or reliance on an outside power source. Unattached soft robotic versions have often been forced to compromise on power capabilities and response times, which are usually lower and slower without tethering.

"We demonstrate that a system-level engineering approach can be used to mitigate the slow cycle times for a faster, untethered LCE-driven soft robot," the authors write. "This engineering approach can improve the conversion of LCE actuation into robot motion … [and] we also propose that LCE robot design can be continually improved by developing synergy between system design and material design."

"We've been working on metallic shape-memory materials for a few years, and we were challenged to also consider what could be achieved with soft stimulus-responsive shape-changing materials," said Morgan Trexler, who manages APL's Science of Extreme and Multifunctional Materials program. "Analyzing the possibilities from the materials perspective, and also thinking about unique expertise areas at APL, we saw an opportunity to make an impact in soft robotics, where materials advances are critical, but integration with other technology advances such as in robotic controls is also needed to make an impact.

Xia's team, which includes Jenny Boothby, Jarod Gagnon, Emil McDowell, Tessa VanVolkenburg, and Luke Currano (all from the Laboratory's Research and Exploratory Development Department), closes the paper with an eye toward prospective advancements, one of which it's already pursuing: Xia, Trexler and a team of fellow APL researchers are developing a highly efficient soft underwater robot to sense and actuate autonomously in a fluid environment. 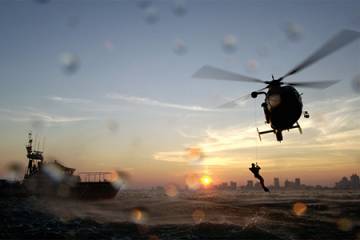 Published Fall 2020
Search and Rescue GPS beacons aboard ships or in hikers' backpacks are the last line of defense against disaster, leading to more than 50,000 rescues to date. A new project by the Johns Hopkins Applied Physics Laboratory aims to make the technology even more accurate and efficient. / Johns Hopkins Magazine 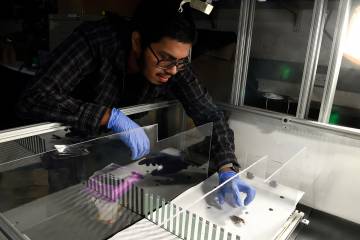 Published June 16, 2020
By chasing cockroaches through an obstacle course and studying their movements, Johns Hopkins researchers have gained insights that will help robots navigate rough terrain