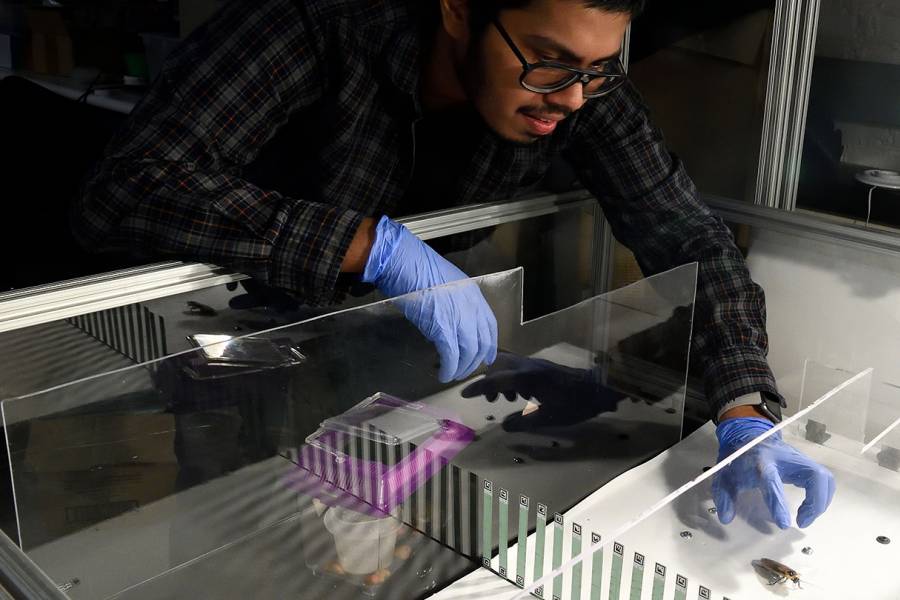 Roaches and robots shake it to traverse tricky terrain

Animals in their natural environments effortlessly switch up their movements to hunt, escape from predators, and travel with their packs every day. By chasing cockroaches through an obstacle course and studying their movements, the Johns Hopkins engineers discovered that animals' movement transitions corresponded to overcoming potential energy barriers and that they can jitter around to traverse obstacles in complex terrain.

A report of the findings were published Monday in Proceedings of the National Academy of Sciences.

"Our findings will help make robots more robust and widen their range of movement in the real world," says physicist Chen Li, an assistant professor of mechanical engineering and the paper's senior author.

With mobile robots on the verge of integrating into society, it's important that they can move through the world around them with ease and efficiency, says Li. While some mobile robots like self-driving cars and robot vacuums are already excellent at navigating flat surfaces and transitioning between movements, many critical uses—such as searching and rescuing in rubble, inspecting and monitoring buildings, and space exploration—require robots to physically interact with their terrain to traverse, rather than simply avoid, obstructions.

"Search and rescue robots can't operate solely by avoiding obstacles, like a vacuum robot would try to avoid a couch," says Ratan Othayoth, a graduate student in Li's lab and the study's first author. "These robots have to go through rubble, and to do so, they have to use different types of movement in three dimensions."

Yet robots still struggle to do so because scientists don't have a clear understanding of how a robot's physical interaction with complex terrain affects its ability to transition between different movements. Understanding this in animals can allow researchers to build more dynamic robots, the researchers say.

To investigate this ability, Othayoth created an obstacle course of "beams," or tall, bendable plates mounted on springs, meant to replicate flexible blades of grass, and tracked how cockroaches transitioned between two types of 3-D movements to make it past. The two movements were a "pitch," or when the cockroach pitched up its body to push against the beams until they bent enough to give way, which is strenuous; and a "roll," when the cockroaches rolled into the gap between the beams to slide through, which is easier.

The researchers digitally reconstructed the cockroaches' and beams' 3-D motion to view how the pitch and roll movements looked on a potential energy landscape—a map showing how the animal and beams' total potential energy changes as the animal's body moves towards the beams and rotates. This map describes the combined effect of gravity and the beams' elastic bending forces acting on the animal body, just like a gravity field or electric field can describe forces acting on a point mass or charge. The difference is that the animal is self-propelled and experiences additional frictional and damping forces, adding to the resulting motion's complexity.

"Imagine you have a bowl and put a marble in it. That marble will go to the bottom of the bowl where it's most stable. Each time a cockroach did a movement, they were pulled towards the bottom of the bowl," explains Li. "We found that each type of movement can be described by one such bowl."

He continues: "Now imagine you have two bowls. When the cockroach transitioned from a pitch to a roll movement, it was like they hopped from the bottom of one bowl to the bottom of the other bowl."

This shows that in order to transition from one type of movement to another, the insects have to overcome the sides of the first bowl, or in other words, have enough energy to overcome the energy barrier.

The researchers discovered that the cockroach's jittering legs shook the body to give it enough energy to overcome the barrier from a more strenuous pitch to an easier roll movement, facilitating traversal.

The team also built a robot to emulate the cockroaches' behavior and further changed how much it jittered. The more the robot jittered, the more energy it had to overcome the energy barrier to transition from pushing across the beams to rolling into the gap to traverse.

These results explain why legged robots that jitter a lot are surprisingly good at traversing large obstacles, even without using any sensors or careful motion planning.

"This strategy of 'just shake yourself' is the most naïve way to make transition, though," says Li. "The animals can—and robots should—add more careful, active adjustments to do it better. That is what we are looking into as the next step."

This new approach of energy landscapes, Li and team say, clarifies how animals use physical interaction to transition between different types of movements, and will guide robots to better do so to traverse complex 3-D terrain like earthquake rubble.

"If successful, the framework being developed by Professor Li's team will be a leap ahead in our ability to realize fast and robust robots capable of deftly negotiating cluttered terrain," says Samuel Stanton, program manager of the Army Research Office, an element of the U.S. Army Combat Capabilities Development Command's Army Research Laboratory. "A great deal of path planning and control would be essentially computed in real time by the morphology and physical dynamics of the robot." 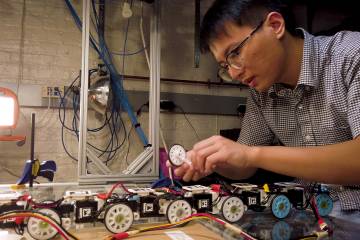 Published Feb 18, 2020
Mechanical engineers design a snake robot based on the climbing technique of the kingsnake that could help advance search-and-rescue technology