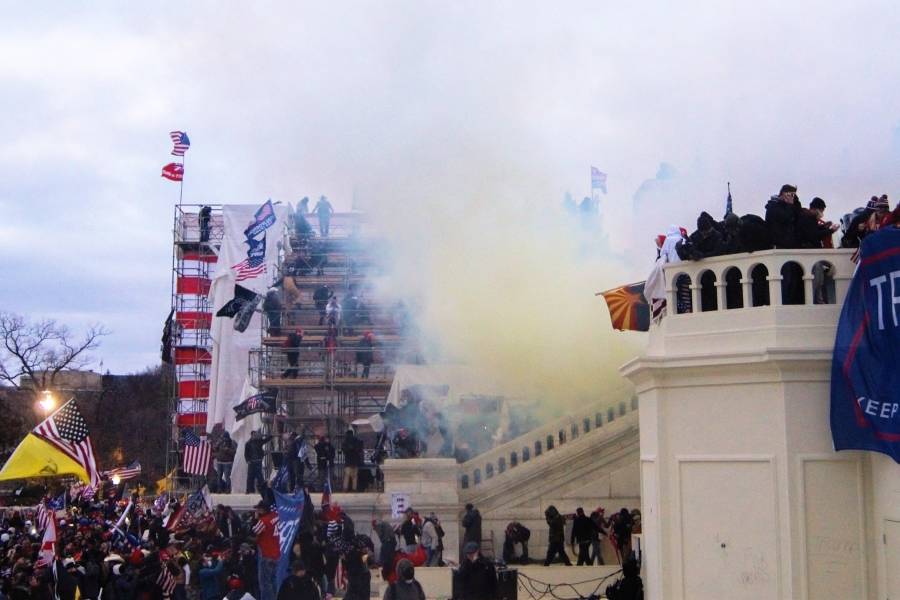 Examining the Capitol insurrectionists and the lingering threat of extremist violence

Eugene Finkel, an expert in violence, state collapse, and social change, discusses what we know about the rioters who attacked the U.S. Capitol one week ago and how the nation can confront the emerging threat of domestic terrorism

Dozens of arrests have been made in connection with the violent attack on the U.S. Capitol last week. Among the identified participants are high-profile conspiracy theorists, members of the far-right nationalist movement the Proud Boys, gun rights activists, and military veterans. Charges have included assault, unlawful entry, property damage, and firearms violations. The U.S. Justice Department announced Tuesday that investigators will pursue felony sedition and conspiracy charges as well as terrorism links.

In addition to the 160 case files opened in six days, the FBI Washington Field Office announced that federal agents are combing through thousands of social media posts to identify additional perpetrators. Acting U.S. Attorney for the District of Columbia Michael Sherwin said during a press briefing Tuesday that the "range of criminal conduct" being investigated in relation to the attack on the Capitol is "unmatched."

What does the future of American national security and safety look like as far-right groups attract new followers and potentially become more violent? And what can be done to counter this homegrown domestic terrorist threat?

For insight, the Hub turned to Eugene Finkel, an associate professor of political science and history at the Johns Hopkins School of Advanced International Studies. Finkel—an expert in violence, state collapse, and social change—previously spoke with the Hub in early November about the potential for localized or large-scale violence during or in the immediate aftermath of the election.

We last spoke in November about the threat of post-election violence, and unfortunately, here we are, months later, following a violent attack on the U.S. Capitol and amid continuing threats against the Capitol and statehouses across the country. What should our leaders be doing to prepare?

Right now, we should be focused more on tactical solutions than political solutions. Short-term strategies. The time for political and social and civic educational strategies will come later. But right now, the focus should be on law enforcement and national security measures. This includes increased numbers of troops and police—not only crowd-control units, but more importantly those who have experience in urban warfare, antiterrorism operations, intelligence gathering, imposing and enforcing curfews—and they need to start taking these threats seriously.

"It's more interesting to focus on the more colorful characters ... but they're not the immediate threat—the people with the zip ties are."

Right now, the risk, at least as I see it, is not that those actions would lead to further destabilization or a civil war, but instead lead to localized but very high profile and bloody events in the short term.

What have we learned since the riots last week about those who participated? What are the grievances that drive them? Do they have anything in common with extremist groups from other parts of the world?

What we saw is a pretty broad and, luckily for us, rather leaderless [collection of people]. It was a disorganized coalition of quite different grievances. What they shared was unhappiness with the status quo and, more importantly, fear about the future. Some fears centered on race, religion—we saw pro-Christian signs and symbols—political ideology, economic grievances mainly related to COVID-19 restrictions and business closures.

Just to give an example of how broad and disparate—and to some extent, nonsensical—this coalition is, you may have seen in the media the man with the "Camp Auschwitz" sweatshirt, or someone else with a shirt [with an anti-Semitic message]. But at the same time, you also saw Israeli flags flying as they stormed the Capitol. I think that tells you a lot about the breadth of grievances that brought those people together.

The vast majority in that coalition were not there because they planned to behave violently. In the photos and footage from the Capitol, quite a lot of them looked surprised to actually be in the building—they wandered around aimlessly, took selfies, but other than that, they weren't doing much. It was sort of like a carnival. And the presence of people in costumes clearly underscores this.

However, groups like this broad coalition can be very dangerous and destructive if they are organized and they are led by someone. Luckily for us, there was no one on the scene to actually direct and organize them as a whole. But there was also a smaller group of people who were organized, who were trained and were prepared and knew what they were doing in the building. These were the people in combat fatigues and with zip ties, and the more we learn about them, the more we discover that quite a few of them have backgrounds in law enforcement or the military. In that way, they are similar to extremist groups elsewhere.

For the most part, this mob reminded me of the pogroms that have taken place around the world. Now, obviously for the media, it's more interesting to focus on the more colorful characters like Jake Angeli, the QAnon "shaman" with the horns, or the person who stole the speaker's podium and smiled for the camera. But they're not the immediate threat—the people with the zip ties are.

Is this still a fringe movement, or has it become more mainstream?

So I'm not sure we're dealing with a movement. I think that we're incredibly lucky, because had it been a movement—something that has clear leadership, structure, and organization—rather than this disorganized collection of hatreds and grievances, I think we would be dealing with a very different situation today. Because given the security failures at the Capitol last week, a real movement could have been able to delay or even reverse the certification of the Electoral College results or corrupt the will of the people.

"The problems with dealing with [violent] groups are not technical problems; they're mostly psychological and political problems. There needs to be a will to confront those people and this movement."

There is a wonderful Hebrew saying that I've been repeating since last week, and translated, it means something like "more luck than brains." And I think we're lucky that it is not a movement, because when it comes to brains—when it comes to preparation and response—we clearly failed.

Of course, parts of this coalition definitely are a movement. No question about that, and those are the most dangerous ones. White nationalists, Proud Boys, militias. But in terms of the larger mass of people, I don't see them as a movement.

How can those organized movements within the coalition be contained?

Here, obviously, law enforcement plays a key role. And the tools to deal with those groups already exist. It's not that U.S. law enforcement doesn't have the capacity to confront domestic terrorism. The problems with dealing with these groups are not technical problems; they're mostly psychological and political problems. There needs to be a will to confront those people and this movement, and there also needs to be a culture shift in law enforcement, because fighting foreign enemies is seen as more prestigious than dealing with domestic threats.

We also need to shift our language about these groups and change how we talk about them. If there's a foreign attack, there is moral clarity. No questions asked—it's terrorism. If there is domestic terrorism, we tend to rationalize it, search for explanations, discuss what grieves them and how we fix it—we're doing that right now. The discourse landscape is changing, but we need to stop asking questions and start countering these groups. Only then will the political strategies and social containment strategies come into play.

Is there a risk that the more extreme but organized groups will recruit new members following these events?

There is certainly a risk of these groups growing. The publicity they received was an enormous coup for them. And they certainly benefited. I do expect them to grow and to attract a larger following. But for those organizations, it's also a double-edged sword, because the more people who join them and the more people they attract, the more vulnerable and less organized they become.

I do expect them to grow, and at least in my mind I fear they will become bolder and more violent, and we might even see this as early as next week. But overall, I don't see them transforming into a mass movement. It's an almost full-time commitment to be part of a violent organization, and most of the people who stormed the Capitol do not want to spend that much time in the woods training or joining a white nationalist community somewhere remote.

I want to revisit something you said during our last conversation. You said, "The doomsday scenario of a civil war I don't think is a realistic possibility at this point. For that to happen, we would need elites on both sides to take serious steps to encourage their followers to engage in that. And without the elites, I don't think we're going to see civil war."

I still stand by that. We've seen violence, and unfortunately we're still likely to see more violence, but not civil war. If those who stormed the Capitol were a consolidated movement and were backed by a significant portion of elites, then certainly the situation would have been different. But based on what we're seeing, even those Republican elites who instigated the mob itself were as surprised by what happened as everyone else was. They were willing to talk the talk but not willing to walk the walk, and without walking the walk I don't think we're likely to descend into a civil war.

I think it goes back to having "more luck than brains." Altogether as a country, we are incredibly lucky that the situation played out the way it did, because the potential for much larger violence or a successful coup was there.

What do you see as the future for American politics with these disorganized but highly motivated and vocal groups that came together to form this coalition?

Some of that will obviously translate into political activism, and there's nothing wrong with that as long as it's done within the limits of legitimate electoral politics. We will certainly see the Republican Party moving to the right, or even splitting and creating another Tea Party moment. Remember, a majority of Trump's supporters were not at the Capitol, and I don't see them becoming violent.

Now, for the organized movements within this coalition, I certainly do see them becoming more radicalized and more dangerous if law enforcement doesn't start taking them seriously. They are a threat, they are dangerous, but it's something that law enforcement has the capacity to deal with—if there is a will to do so. 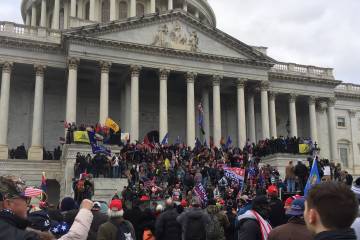 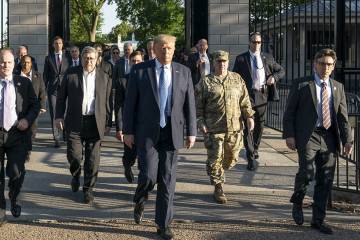 Veering toward a civilian-military crisis

Published June 30, 2020
SAIS panelists weigh in on strained civilian-military relations and the risk that domestic politics may damage the perception that U.S. Armed Forces are apolitical