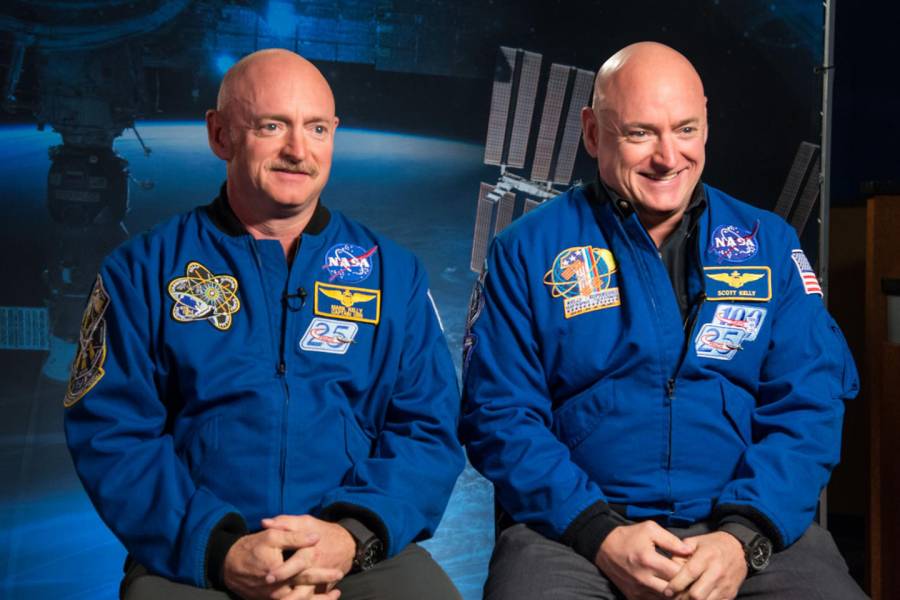 Image caption: Identical twins Scott and Mark Kelly are the basis of a groundbreaking study on the effects of space travel on the human body. Scott (right) spent a year aboard the International Space Station while Mark remained earthbound.

After returning from International Space Station, astronaut Scott Kelly had no lingering, major epigenetic differences from his earthbound twin, Mark

In a landmark study, scientists from Johns Hopkins, Stanford University, and other U.S. institutions has found no long-lasting, major differences between the epigenomes of astronaut Scott Kelly, who spent a year in space aboard the International Space Station, and his twin brother, Mark, who remained on Earth.

But key results from the NASA Twins Study do confirm that prolonged space travel triggers stressors that can alter genes, send the immune system into overdrive, or hinder mental reasoning abilities and memory. Whether these stressors have long-term health repercussions remains unclear, as does what the study tells us about the perils of space travel on a person's genome, the scientists say.

But additional research could eventually help scientists predict the types of medical risks astronauts may face on long space journeys where people experience less gravity than on Earth, exposure to harmful ultraviolet rays, and other risks to health.

"This is the dawn of human genomics in space," says Andrew Feinberg, the Bloomberg Distinguished Professor of Medicine, Biomedical Engineering, and Mental Health at Johns Hopkins University. "We developed the methods for doing these types of human genomic studies, and we should be doing more research to draw conclusions about what happens to humans in space."

"If we know what to expect, we can anticipate health problems astronauts may encounter and ensure that medicines and other remedies are at hand during a mission."
Andrew Feinberg
Bloomberg Distinguished Professor of Medicine, Biomedical Engineering, and Mental Health

Epigenetic changes involve chemical "tweaks" to DNA that can influence gene activity, but the changes don't affect the underlying genetic code itself. The changes affect when and how a gene is expressed for its protein-encoding instructions. When epigenetic changes occur at the wrong time or place, the process can turn genes on or off at the wrong time and place, too.

Scientists have long monitored and studied the physiological effects of space travel on astronauts. But most of these astronauts travel on spaceflight missions of six months or less, not the longer missions required to travel to Mars or elsewhere. More research is needed to understand the impact of long spaceflight missions on the human body, where there is more exposure to radiation, restricted diet, less exercise, lower gravity, and disrupted sleep cycles. 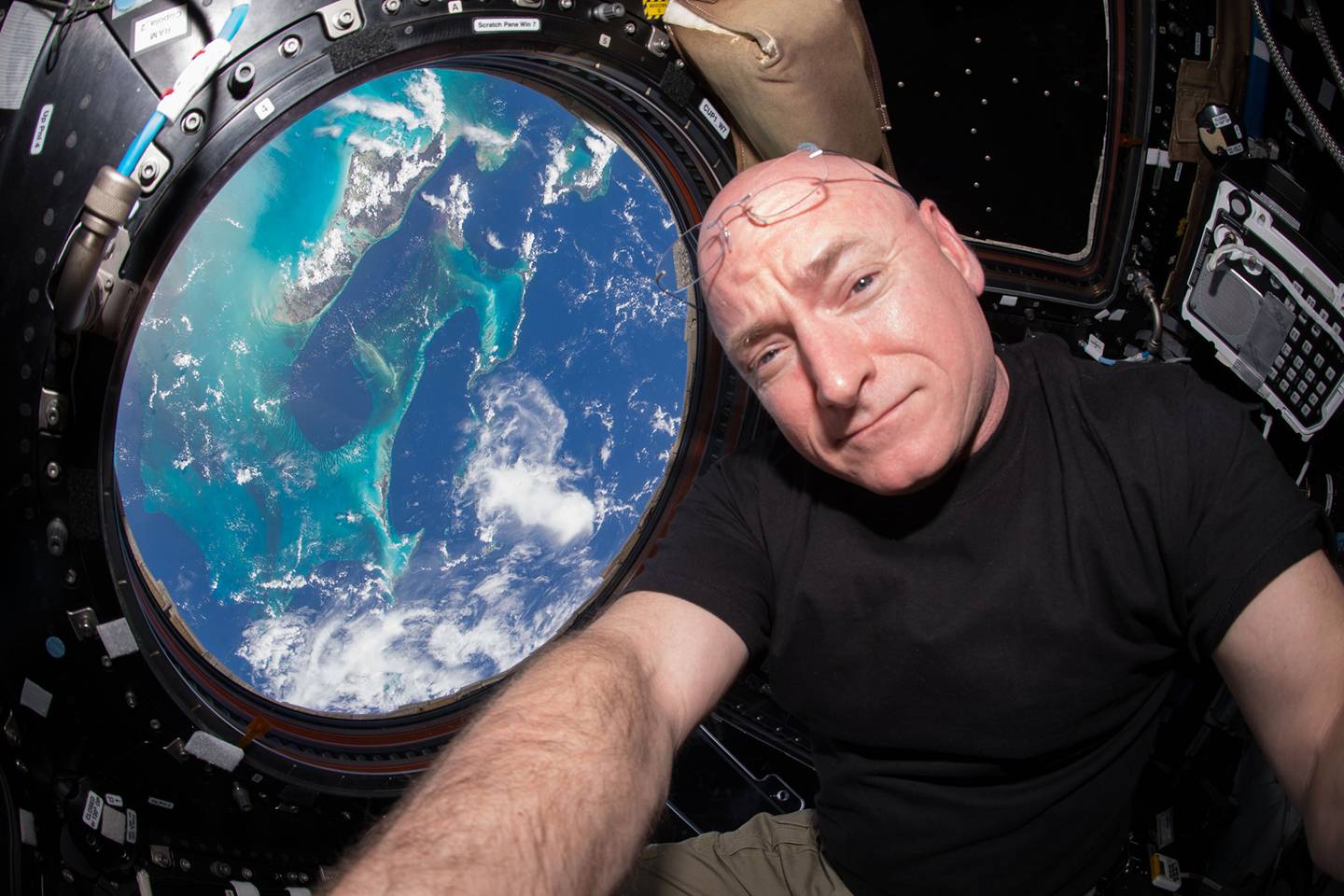 Image caption: Scott Kelly's yearlong mission was the longest any American has spent in space. Along with his previous missions, he also holds the U.S. record for most cumulative time spent in space.

Feinberg notes that studying identical twins—who, by nature, have the same genetic material—was an important and rare opportunity to compare physiological and genomic changes when one twin went into space and the other remained on Earth.

"However, since we only have two people in our study, we can't say that these changes are due to space travel itself," says Feinberg. "We need more studies of astronauts to draw such conclusions."

For the study, described in the April 12 issue of Science, scientists collected blood samples, physiological data, and cognitive measurements from Scott and Mark Kelly over the course of 27 months before, during, and after Scott's one-year space mission. The samples from Scott during the flight were collected on the space station when shipments from Earth arrived on a Soyuz rocket and, that same day, shipped back to Earth on the rocket so that the samples could be processed within 48 hours.

Feinberg and former postdoctoral student Lindsay Rizzardi, now a senior scientist at the HudsonAlpha Institute for Biotechnology, focused on epigenetic changes to Scott and Mark's genomes.

Specifically, Feinberg and his team examined two types of white blood cells—CD4+ and CD8+—isolated from Mark and Scott's blood. They focused on epigenetic marks consisting of chemical modifications called methyl groups that are added to the DNA in a process called methylation.

Overall, they found that about just as many epigenetic changes occurred in earthbound Mark's DNA as occurred in his space-flying twin. There was a less than 5 percent difference in overall methylation between the twins during the mission. The largest difference occurred nine months into the mission when 79 percent of Scott's DNA was methylated, compared with 83 percent of Mark's. 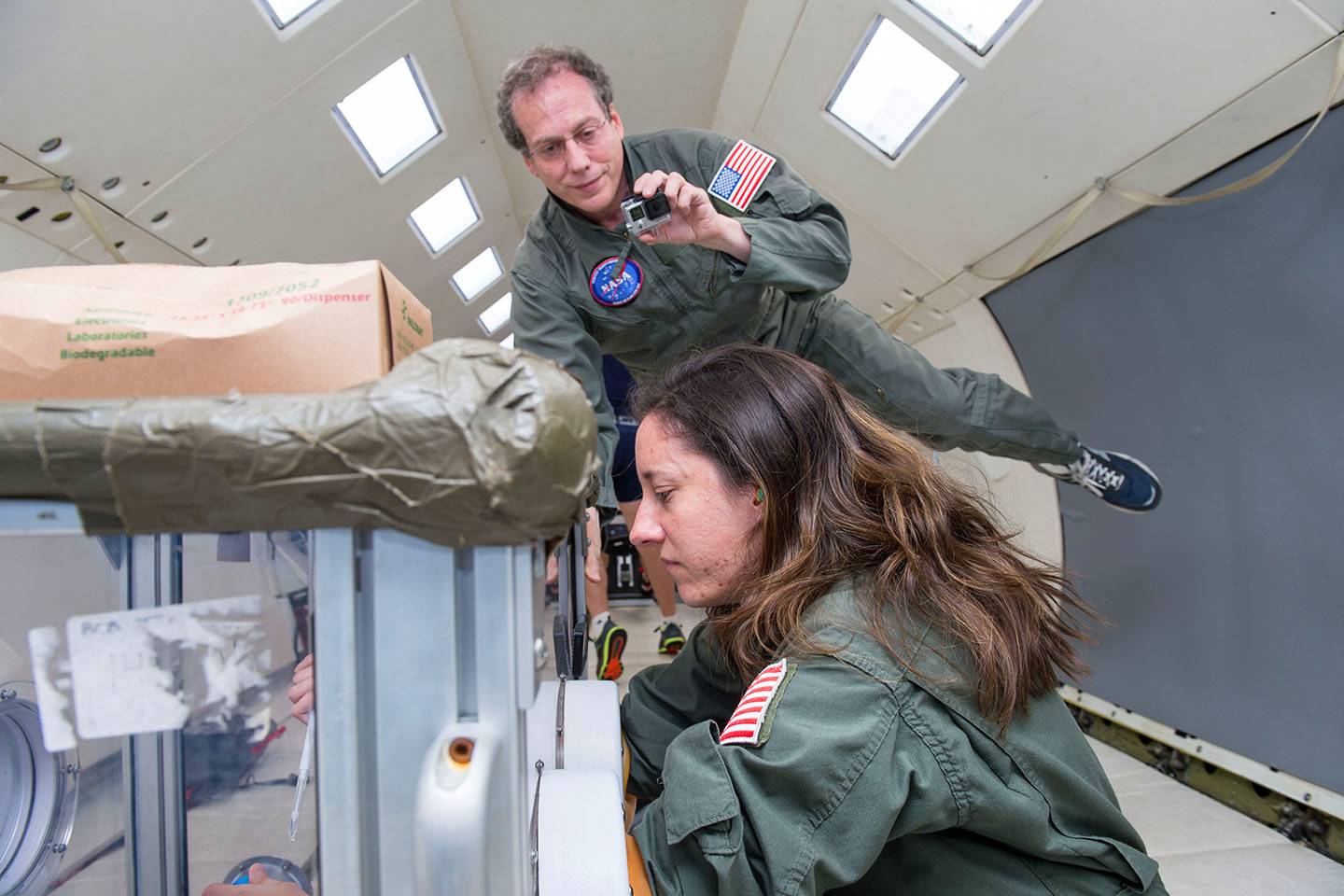 Image caption: Feinberg (left) and Rizzardi spent a week aboard NASA's vomit comet, a modified Boeing jet that simulates the weightlessness of the space station

The locations of methylation changes in the genome were different for each twin. For example, the scientists found methylation changes near genes involved in immune system responses in Scott during his time in space, but not in Mark. This correlated with data from other researchers involved in the current study who found increases in certain biochemical markers associated with inflammation in Scott but not Mark.

"It was encouraging to see that there was no massive disruption of the epigenome in either Mark or Scott," says Rizzardi. "However, with only two people in the study, we're limited in the conclusions we can draw about the effect of space travel on the genome. But the findings give us clues to what we should examine more closely in future studies of astronauts."

In the current study, Scott's biological samples were shipped back to Earth immediately, but in the future, astronauts may need to process and store samples on the spacecraft. Feinberg, Rizzardi, and NASA scientist Brian Crucian developed detailed instructions for doing complicated experiments in microgravity. Feinberg and Rizzardi traveled for a week on the famed "Vomit Comet," a plane that simulates weightlessness, to test their protocols for overcoming the challenges of collecting, purifying, and storing blood samples aboard the space station.

Of the studies led by scientists at Stanford University, Colorado State University, Cornell University, and others, some of the notable results included Scott's in-flight lengthening of telomeres, the protective endcaps on chromosomes. The telomere lengthening, as previously reported, returned to normal when Scott returned to Earth.

In addition, more than 90 percent of genes that changed activity levels during Scott's flight returned to normal six months after the flight. Yet, Feinberg notes, these changes are not indicative of space flight alone, nor do they differ from what might occur normally.

The scientists also found that the shape of Scott's eyeball changed over the course of the flight, including a thicker retinal nerve and folds in the choroid layer that surrounds the eye. These changes typically affect visual acuity and, says Feinberg, have occurred in other male astronauts but not females. The scientists also observed cognitive changes and increased stress levels in Scott during the flight, which, again, may not be attributed to space flight alone.

Feinberg says this study lays the groundwork to make predictions about an astronaut's gene-related and physiological function during a long-term mission.

"If we know what to expect," he says, "we can anticipate health problems astronauts may encounter and ensure that medicines and other remedies are at hand during a mission." 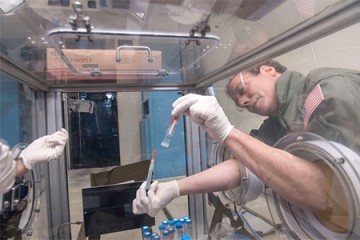