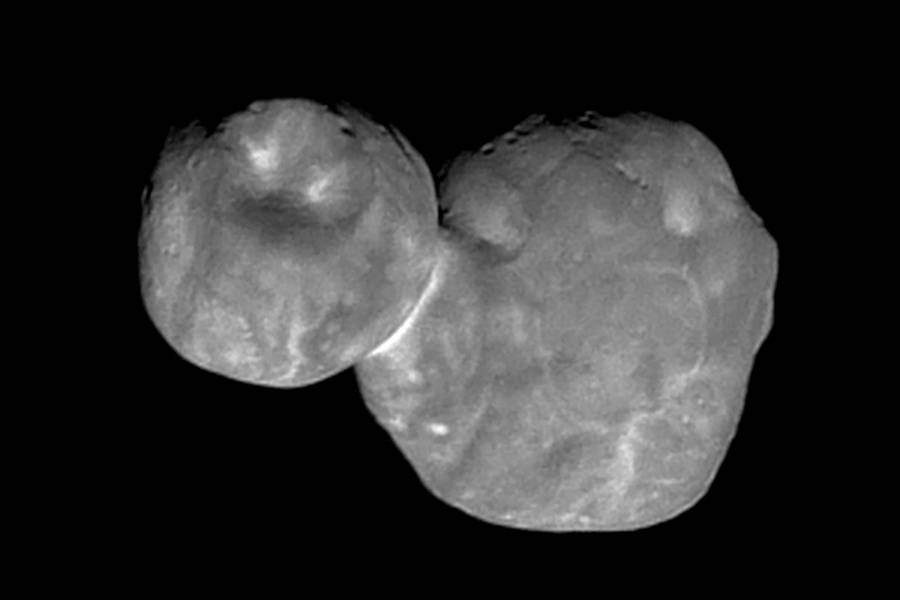 A new image of the Kuiper Belt object known as Ultima Thule was released Thursday, the clearest view yet of this remarkable, ancient object in the far reaches of the solar system.

The photo of Kuiper Belt object 2014 MU69 was snapped by NASA's New Horizons spacecraft during its New Year's Day flyby, taken when Ultima Thule was 4,200 miles from the spacecraft—seven minutes before closest approach. The image, which has an original resolution of 440 feet per pixel, was stored in the spacecraft's data memory and transmitted to Earth on Jan. 18-19. Scientists then sharpened the image to enhance fine detail. This process—known as deconvolution—also amplifies the graininess of the image when viewed at high contrast.

The oblique lighting of the image reveals new topographic details along the day/night boundary, or terminator, near the top. These details include numerous small pits up to about 0.4 miles in diameter. The large circular feature, about 4 miles across, on the smaller of the two lobes, also appears to be a deep depression. It's unclear whether these pits are impact craters or features resulting from other processes, such as "collapse pits" or the ancient venting of volatile materials.

Both lobes also show many intriguing light and dark patterns of unknown origin, which may reveal clues about how this body was assembled during the formation of the solar system 4.5 billion years ago. One of the most striking of these is the bright "collar" separating the two lobes. 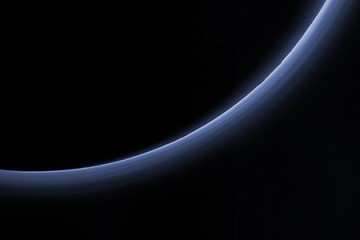 "This new image is starting to reveal differences in the geologic character of the two lobes of Ultima Thule, and is presenting us with new mysteries as well," said Principal Investigator Alan Stern of the Southwest Research Institute in Boulder, Colorado. "Over the next month there will be better color and better resolution images that we hope will help unravel the many mysteries of Ultima Thule."

New Horizons is approximately 4.13 billion miles from Earth, operating normally and speeding away from the Sun at more than 31,500 miles per hour. At that distance, a radio signal reaches Earth six hours and nine minutes after leaving the spacecraft. 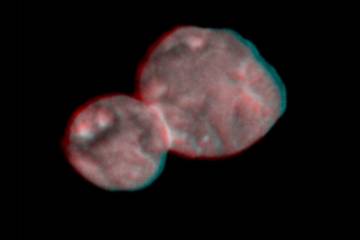 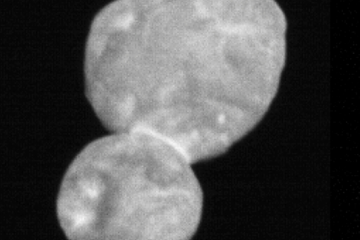 Published Jan 2, 2019
New, detailed images of Ultima Thule shed light on the processes that built the planets billions of years ago