Panelists reflect on Charlottesville, free speech, and the politics of disempowerment 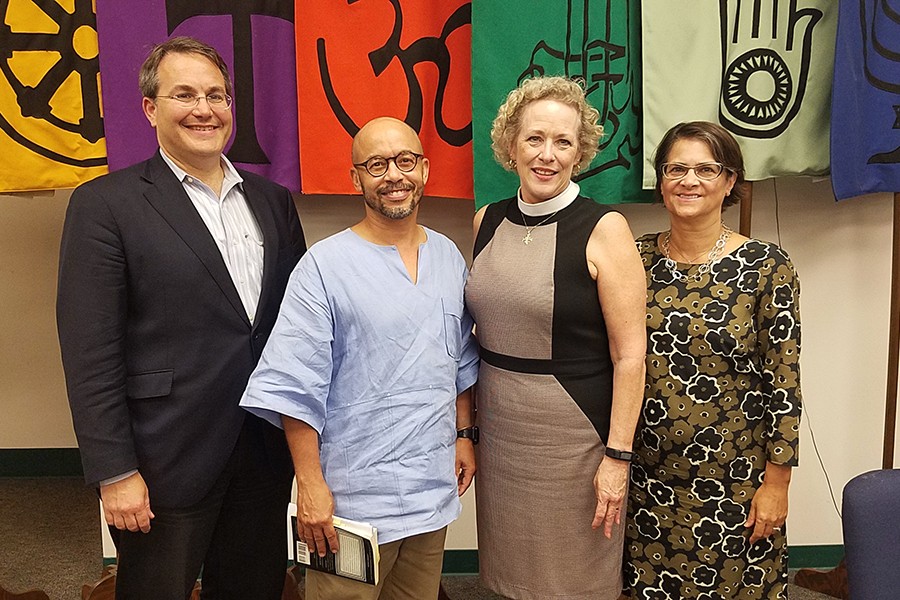 The night before the Charlottesville rallies last month, activists and faith leaders from across the country gathered at St. Paul's Memorial Episcopal Church, in the spirit of past civil rights marches, to prepare to confront the white supremacists descending upon the Virginia college town.

But the following day proved too dangerous, the church's chaplain, Rev. Elaine Thomas, said Wednesday night during a panel discussion at Johns Hopkins University. At one point, she noted, a member of the Ku Klux Klan "pulled a gun on a group of people in front of our church."

"Charlottesville felt ripe for these kinds of events," Thomas said of the protests and upheaval in Charlottesville that made headlines across the country—not only because of the "crescendo" of white supremacist influences pervading the city in the months before the "Unite the Right" rallies, but also, more deeply, because of its complex history with race.

"As people are quick to point out, Thomas Jefferson built his university on the backs of slaves," Thomas said of the University of Virginia, the focal point of Charlottesville and the backdrop of the contentious mid-August events that prompted violent confrontations and left one woman dead.

Thomas also noted that the Robert E. Lee statue that sparked those rallies—the city had previously decided to remove the Confederate symbol—is one of several dating back to the early 1900s that "tower over the parks in which they stand."

Thomas joined three Johns Hopkins University professors Wednesday night for a panel discussion on the Charlottesville rallies and their aftermath. The event at the Bunting-Meyerhoff Interfaith Center included a screening of the Vice News segment "Charlottesville: Race and Terror".

Political science professor Robert Lieberman, JHU's former provost whose research focuses on race and inequality, said the events in Charlottesville "force us to re-examine what it means to say racism in the United States of America is on the decline."

He stepped back to cast the racial strife within its broader framework—"the political despair and disempowerment" of working-class whites that also contributed to the rise of Donald Trump.

This "stew of economic anxiety and global displacement," Lieberman suggested, has created "this extraordinarily virulent, in-your-face kind of expression and activity."

Lawrence Jackson, a Bloomberg Distinguished Professor of English and History, questioned whether the torch-bearing groups that gathered in Charlottesville could be a harbinger of "a radical ... neo-fascist kind of party" gaining a foothold in America.

Thomas, for her part, downplayed that notion, noting that the "Unite the Right" rally in reality consisted of "many different groups that can't agree on anything."

The panelists discussed ways in which what occurred in Charlottesville has forced new thinking on how large protests are policed and on the rights to free speech, particularly when it comes to protecting perceived hate groups.

"We're in a new moment for thinking about the First Amendment, not only in a cultural and everyday sense, but I think doctrinally," said Martha Jones, a Johns Hopkins history professor. "Charlottesville has really become a touchstone for thinkers who have not budged around the continuum of speech, hate, and violence."

The event also included a brief focus on Baltimore, where four Confederate memorials were removed from city property a few days after the Charlottesville violence.

"There's lots more of them," Jones said of the historic markers and buildings in Baltimore linked to a "complicated" racial past. Among them, she noted, is the Walters Art Museum, whose namesake was a Confederate sympathizer.

Moving forward post-Charlottesville, the panelists spoke of the importance of activism, engagement, and dialogue.

"The long, deep work of justice is what comes now," said Thomas, whose Charlottesville Clergy Collective is now involved in such efforts.

Jones called for "understanding if not forgiving ourselves … for our imperfect capacity to respond to an evil that is baked in" to our society.

The panel discussion was hosted by Campus Ministries, the Office of Multicultural Affairs, and Student Leadership and Involvement. 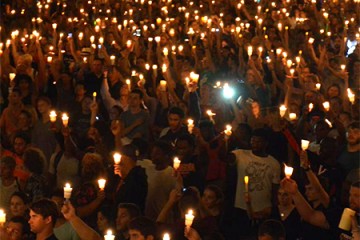 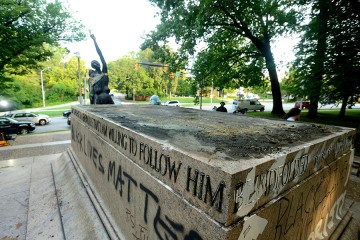