'Such statues,' says Daniels, 'continue to be rallying points for white supremacists' racism, and, ultimately, violence' 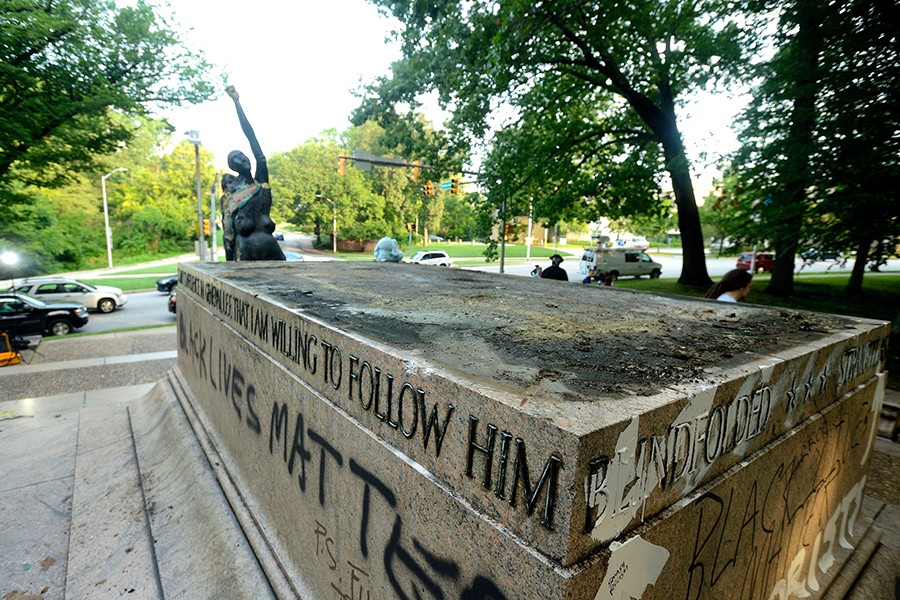 Image caption: The plinth where the Lee and Jackson Monument once stood has been the site of graffiti as well as protest art, including Pablo Machioli's statue, 'Madre Luz'

"I commend Mayor Catherine Pugh and the City Council for their decision to remove Confederate monuments," he said. "We all witnessed the events in Charlottesville, Virginia, over the weekend, where such statues continue to be rallying points for white supremacists' racism, and, ultimately, violence. We share the belief that the statues and what they represent have no place in our city and applaud this action as a way to affirm the values of diversity, equity, and inclusion that strengthen our university, our city, and our nation."

The statue at the center of Charlottesville's storm

At a news conference today, Pugh said she had aimed to remove the statues "quickly and quietly," due to the current political climate. This past weekend, white nationalists from across the U.S. rallied in Charlottesville, Virginia, to protest the planned removal of a statue of Confederate Army leader Robert E. Lee from a public park. After police ordered the park to be cleared, a protester drove a car through a crowd of counter-protesters, killing 32-year-old Heather Heyer and injuring 19 more.

Pugh said she began formulating plans to remove the statues in June, when she met with Mitch Landrieu, the New Orleans mayor who removed four Confederate statues this past spring, including the overnight removal of a statue of Jefferson Davis.

In Baltimore, the statue removals took place between 11 p.m. Tuesday and 5 a.m. Wednesday.

Another statue that was removed commemorated Roger B. Taney, who wrote the pro-slavery Dred Scott Supreme Court decision, and the fourth was the Confederate Soldiers and Sailors Monument.