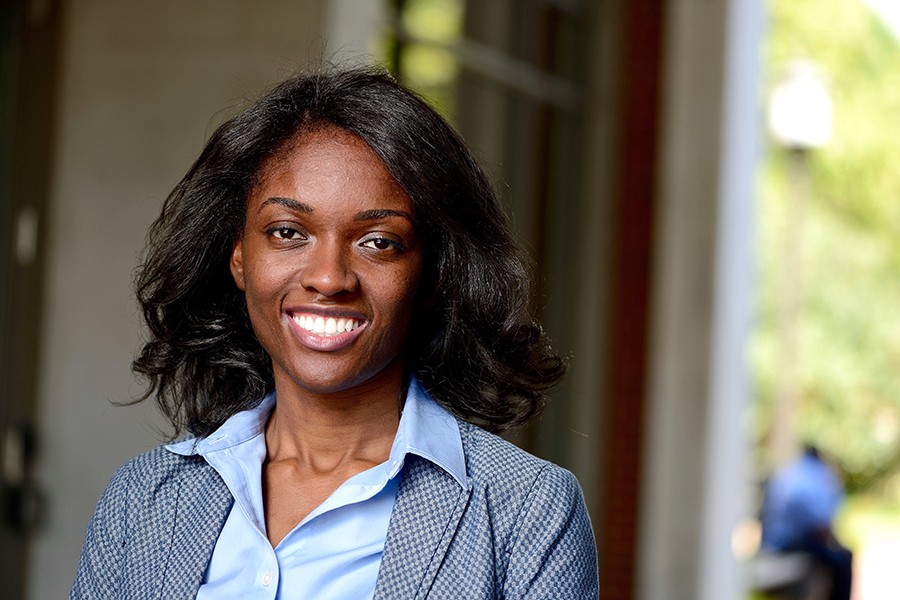 Muyinatu A. Lediju Bell, a Johns Hopkins engineering professor who designs medical imaging systems that link light, sound, and robotics to produce clearer pictures, was honored today by MIT Technology Review, which placed her on its prestigious 2016 list of 35 Innovators Under 35. The list annually spotlights the nation's most promising young scientists.

The magazine recognized Bell for her innovative work in the fields of biotechnology and medicine. She is one of nine "Inventors" on the list who are "building the stuff of the future."

The honor places her in lofty company.

"I keep track of people who've been on the list, and I deeply respect their work. It is a great honor to join this amazing group of pioneers and innovators who have changed the world with their technologies."
Muyinatu Bell, JHU researcher

"Over the years, we've had success in choosing young innovators whose work has been profoundly influential on the direction of human affairs," said Jason Pontin, the magazine's editor in chief and publisher. "Previous winners include Larry Page and Sergey Brin, cofounders of Google; Mark Zuckerberg, cofounder of Facebook; and Jonathan Ive, chief designer of Apple. We're proud of our selections and the variety of achievements they celebrate, and we're proud to add Muyinatu Bell to this prestigious list."

Added Bell: "I keep track of people who've been on the list, and I deeply respect their work. It is a great honor to join this amazing group of pioneers and innovators who have changed the world with their technologies."

Bell's interest in how things work goes back her childhood in Brooklyn, New York. When she was 6 years old, she announced to her family that she was going to be a scientist when she grew up. As she excelled in school, she steered her aspirations toward engineering, which combined her two favorite subjects: math and science.

After high school, she majored in mechanical engineering at MIT, then earned her PhD in biomedical engineering at Duke. She arrived at Johns Hopkins in 2012, initially as a postdoctoral fellow in the Engineering Research Center for Computer-Integrated Surgical Systems and Technology.

At Johns Hopkins, Bell founded and directs the Photoacoustic and Ultrasonic Systems Engineering Lab, or PULSE Lab, where she is designing the next generation of medical imaging systems using fiber optics, lasers, ultrasound systems, and robot-assisted surgical tools. The goal is to generate clearer live views of a patient's internal anatomy to help surgeons avoid injuring critical features such as blood vessels and nerves while performing delicate procedures.

"To achieve our mission of harnessing the promise of engineering to change the world for the better, it is essential for us to identify, invest in, and support young, innovative researchers such as Muyinatu Bell, who I am confident will move society forward," said Ed Schlesinger, dean of the School of Engineering. "Her work has many applications, including the potential to transform the way surgeons visualize arteries hidden by bone during complex neurosurgeries."

Bell is in the process of setting up her laboratory space in the new Carnegie Center for Surgical Innovation in The Johns Hopkins Hospital, Schlesinger added, and she will benefit from the newly formed Malone Center for Engineering in Healthcare, which was created to speed the deployment of research-based innovations that will enhance the efficiency, effectiveness, and consistency of health care.

"Working with our colleagues in medicine at Hopkins, our goal is to bring technologies to practical implementation," Schlesinger said. "We are thrilled that the editors of MIT Technology Review share our view of Professor Bell as a true innovator."

The robotics aspect of Bell's work builds on her collaborations with experts in the university's Laboratory for Computational Sensing and Robotics to control individual ultrasound and photoacoustic system components and extend human reach. For example, Bell's photoacoustic imaging system was recently integrated with a research da Vinci Surgical System to remotely control the use of an optical fiber to provide optimal views of hidden vessel boundaries during procedures that are performed through incisions as small as a keyhole.

Bell plans to align her inventions with patient care at Johns Hopkins Hospital to move toward clinical use of the devices, methodologies, and tools developed in the PULSE Lab. The aim is to expand and transform the realm of surgical and diagnostic possibilities.