The segment comes on the heels of a massive and well-publicized breach of Democratic National Committee data—a hack widely reported to be linked to Russia. More recently, Republican presidential candidate Donald Trump has suggested that the November election could be "rigged."

"If there were a hack, ... that could disenfranchise large numbers of voters, or it could even just bring into doubt whether the election was run fairly."
Avi Rubin, JHU computer security expert

In light of those events, and with the elections just three months away, just how vulnerable are our voting booths and our voting results?

"Everything we know about electronic voting machines is they're not very secure, they're not tested or designed rigorously, and in many cases there's no way to detect or recover from fraud," said Bruce Schneier, an internationally renowned security technologist and author of the 2015 book Data and Goliath: The Hidden Battles to Collect Your Data and Control Your World. "So there really is a disaster waiting to happen. We don't know when it will or if it will, but it's not pretty."

Rubin, technical director of JHU Information Security Institute, added that U.S. elections may be more vulnerable to tampering now than they were a decade ago, when he first exposed flaws with electronic voting machines and authored Brave New Ballot: The Battle to Safeguard Democracy in the Age of Electronic Voting.

"Unfortunately I think the thing that has improved the most in the past 10 years is the sophistication of the hackers," said Rubin, who specifically mentioned Russia and China as nations that sponsor hackers.

While much attention is paid to the vulnerability of voting machines, Rubin noted that the voting rolls are perhaps a greater concern.

"The often neglected concerns are the registration databases, which include the lists of everyone that is eligible to vote," Rubin said. "And if there were a hack—and there already is a documented case of a hack against a voter registration system—that could disenfranchise large numbers of voters, or it could even just bring into doubt whether the election was run fairly."

The full segment featuring Rubin and Schneier is below: 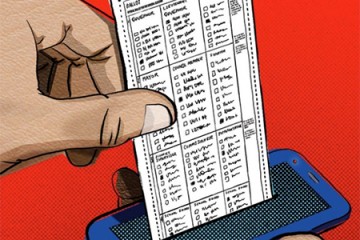