With a new director, Food System Lab focuses on education at Cylburn Arboreteum 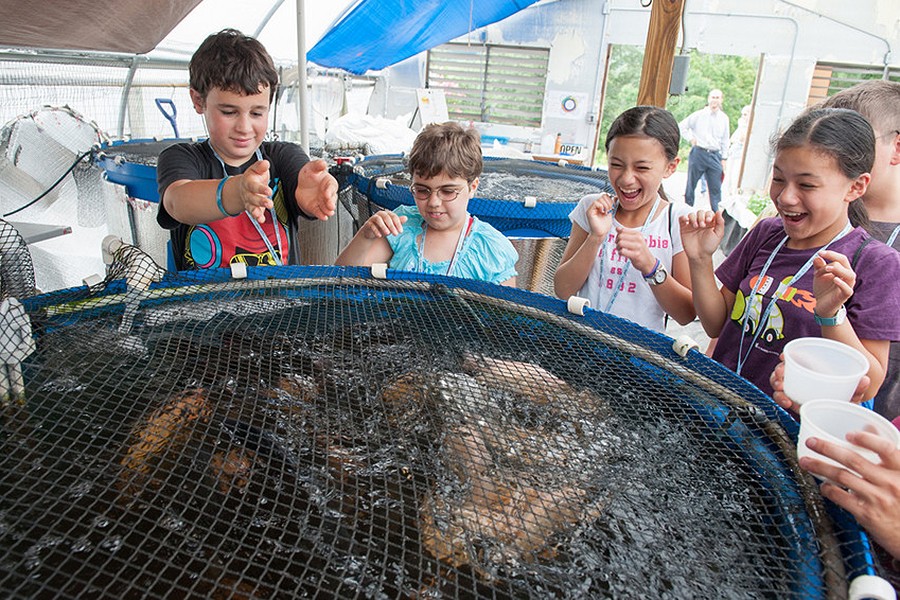 Image caption: Students on a field trip to the Food System Lab feed the fish

Sometime last summer, the team at the Johns Hopkins-run aquaponics lab took out some power tools and set to chopping their system in half. In their greenhouse at Baltimore's Cylburn Arboretum, they scaled back their plant beds and went from four water tanks filled with tilapia to two.

Although there's less space now for the aquaponics system to grow vegetables and fish, there's more space for people to gather. And it turns out the latter has proved the more valuable mission.

The rechristened Food System Lab, which has defined itself as an urban teaching farm, welcomed more than 1,500 visitors last year through school and group trips, service learning, and open houses.

The lab was originally conceived in 2012 as a demo project for Johns Hopkins University's Center for a Livable Future to test the viability of aquaponics, a niche but attention-catching corner of the urban farming movement. Ultimately, after not seeing profitability, JHU scientist Dave Love and his team tilted their focus to the aspect of the project that seemed more fruitful: its potential to educate.

The rechristened Food System Lab, which has defined itself as an urban teaching farm, welcomed more than 1,500 visitors last year through school and group trips, service learning, and open houses.

The focus remains on aquaponics, which merges aquaculture (fish farming) and hydroponics (soil-less plant growing) in a symbiotic environment. And the system continues to produce fish and vegetables to sell at local farmers markets and restaurants. But the commercial angle plays a side role to the tours, classes, and curriculum the Food System Lab now offers, including a 90-minute course on Baltimore's food community.

"We wanted to transition the project toward the area that resonated the most with us and with the feedback we were collecting from the community," Love says. "What we heard was that everybody was very excited and interested in our educational offerings."

Jesse Blom, who joined Hopkins last month after six years working on aquaponics and urban agriculture projects in Milwaukee, has stepped in to guide this evolving program. Blom's background is especially fitting for the Hopkins lab, since he's seen firsthand how an educational mission can grow from an original commercial intent.

In Milwaukee, Blom worked for the nonprofit Sweet Water Foundation, which initially started as partner to a commercial aquaponics enterprise running in an old factory building. That business, Sweet Water Organics, found after three years that revenue couldn't keep up with energy costs, Blom says. The for-profit side folded in 2013, but the foundation lived on, building on its educational and community work.

"We learned that the nonprofit survived all that and continued," Blom says.

That trajectory falls in line with the experience Love and his team had with aquaponics at Cylburn. 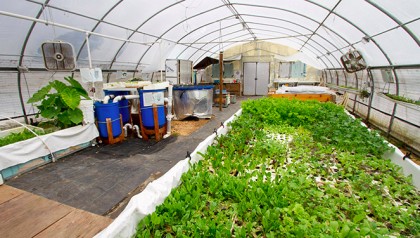 Image caption: Aquaponics is a system of agriculture called in which fish and plants are raised together. The fish waste provides nutrients for plants to grow and hydroponic plant beds filter the water for the fish. Water continually recirculates between the fish tanks and the plant beds, creating a water efficient and low-waste method of agriculture.

"We found that a small-scale aquaponics facility in Baltimore was not set up to be a profitable enterprise," Love says. "We did that through building a system and testing it and running it for two years, and having commercial sales of the fish and plants."

As with Sweet Water, energy costs proved to be the biggest setback, the researchers learned. And though the vegetables were profitable, the fish were not.

But along with this hands-on experience in Baltimore, Love and his team—including departing farm manager Laura Genello—researched aquaponics systems across the world, finding a mixed bag of outcomes as the movement's popularity grew.

Along with its commercial prospects and potential to increase food production in urban areas, aquaponics has won attention from farmers and scientists interested in the environmental sustainability and personal health benefits.

In 2014, the Hopkins researchers conducted a first-of-its-kind international survey of more than 800 aquaponics practitioners, examining their methods and motivations, and followed that up with an international survey on the profitability of commercial systems. Attesting to the interest in subject, the latter survey is the most-accessed article Aquaculture, a top journal in its field, has published in more than 13 years.

"People really want to know what the field looks like, the shape of this industry, because it's so new," Love says.

The survey found that 31 percent of the commercial operations reported a profit in 2013. Chances for success increased with warmer climates—studies in Hawaii have reaffirmed this, Love notes—greater aquaponics knowledge, and a profitable component beyond food, like workshops, consulting services, or agrotourism.

Looking beyond the numbers, though, Love and others see value in aquaponics as a tangible way to demonstrate urban agriculture in practice.

"Not that urban farms can provide all of our food—they can't—but they can give individuals an idea of how food is raised," he says. "Aquaponics is a nice way of showing that."

Blom, who takes charge of the Food System Lab as Love continues in an advisory role, agrees.

"The thing we do know is that it captures people's attention in such a way that other forms of growing do not," he says. "That was more than enough reason to keep this aquaponics project going." 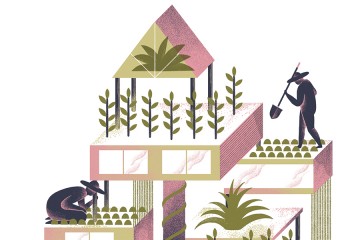 Published Fall 2015
J.J. Reidy is a farmer in search of a roof / Johns Hopkins Magazine 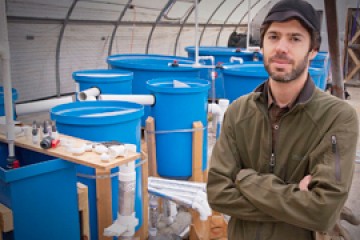