The Aquaponics Project, a sustainable farming effort being run out of a 1,200-square-foot Baltimore greenhouse, formally launched today with a grand opening ceremony. The goal of the project, developed by the Johns Hopkins Center for a Livable Future, is to demonstrate the potential effectiveness of aquaponics as an alternative to current methods of food production. If successful, the effort will also raise fish and hundreds of pounds of organic produce to sell at local farmers' and fish markets. 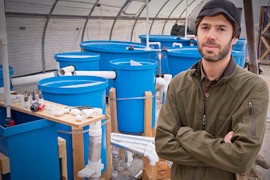 Aquaponics combines aquaculture, or fish farming, and hydroponics, soil-less plant farming. The Johns Hopkins Aquaponics Project includes about 400 tilapia in 210-gallon tanks inside a greenhouse at the Cylburn Arboretum, a nature preserve located in north-central Baltimore. Waste from the fish is used as fertilizer for growing plants, including lettuce, kale, celery, basil, eggplant, and okra.

Tilapia were introduced into the tanks in June, and the center expects them to begin reaching market weight in January.

The project is led by David Love, an assistant scientist with the Department of Environmental Health Sciences in the Bloomberg School of Public Health.

"I wanted to get folks in Baltimore excited about alternative urban farming ideas," Love told the Gazette for an article that appeared in the Aug. 1, 2011, edition. "Urban farming is really taking off in Baltimore; you just have to look at the corner lots and odd spaces that people are using to grow food."