"We also learned that testing our vehicle 30 or 40 times in the days leading up to the competition subjected it to more stress than the average Hopkins student," said Robert Raniszewski, who, along with RDTO teammates Rafael de la Tijera Obert and John Donohue, won this year's contest. "We had to completely redo the whole thing two days ago when stuff started to fall apart."

On Wednesday afternoon, 16 teams comprising 44 students gathered in the auditorium of JHU's Shriver Hall to take part in the fun-but-fierce competition, which is the final assignment in their Freshman Experiences in Mechanical Engineering course. Over the years, the contest has become an annual rite of passage for first-year mechanical engineering students at the university's Whiting School of Engineering. The contest challenges teams to use one mousetrap, two rubber bands, and $15 worth of materials to design and construct a small vehicle that performs a certain task.

This year, the devices had to roll across the Shriver Hall stage before launching a small Hacky Sack about 100 feet into Row M (for "mechanical") of the auditorium's seating area. The energy used to move the devices across the stage was provided by duckpin bowling balls, which rolled down a steep ramp and rammed into them.

"This turned out to be a much more challenging challenge than I expected," said Steven Marra, associate teaching professor, instructor for the course, and mastermind behind each year's challenge.

Members of Team Untitled, Chloe Pacyna and Miranda Grenville, equipped their duct-tape-clad invention with an axle that, as it rotated with the motion of the wheels, tightened an 8-foot string that pulled a lever and released the cup cradling the Hacky Sack.

"That was the plan, anyway, and it worked great when we were trying it out," Pacyna said. Unfortunately, the mechanism didn't work during the actual competition, and Untitled was eliminated early in the competition.

Kelsey Ishimoto, Maria Coleman, and Austin Dillow of the Marra-velous MechEs (more than a few of this year's team names featured puns on their instructor's surname) made it into the final round against RDTO with their Christmas-themed machine.

"We're excited that it worked so well" said Ishimoto of the plywood vehicle, which featured red-striped bars, green wheels, and pictures of Christmas trees and snowflakes.

"For many of our students, this was the very first experience they had in designing and building something that works," he said. "It was a big task: they had to come up with contraptions that effectively transferred energy and momentum, could survive multiple collisions with the bowling balls, and could launch the Hacky Sacks accurately and at the proper time. And they were constrained in the materials they could use and the amount of money they could spend."

The course and competition, he said, lays the groundwork for the increasingly more advanced design work that they will tackle over the next four years as mechanical engineering majors at Johns Hopkins. 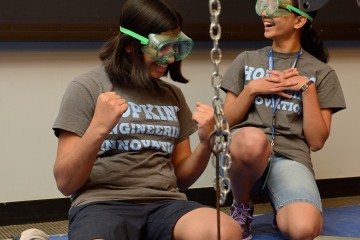 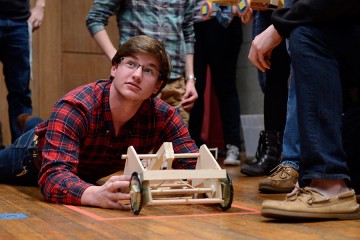 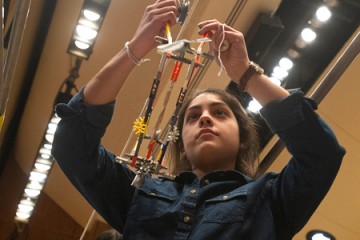