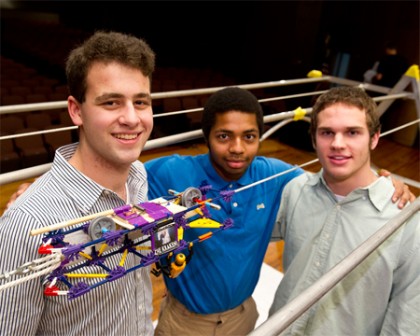 Image caption: The winning team of Luke Brown, Evan Adamo, and Josh Harris with their entry, Release the Kraken.

The race was the final assignment for the Freshman Experiences in Mechanical Engineering course. This year's challenge was aptly named "Hang In There."

The assignment: Use two mousetraps, six rubber bands, and $15 worth of materials to build a vehicle that starts on a cable five feet above the ground, traverses it without falling, then releases a 20-gram payload in an attempt to strike a target drawn on paper below.

There's no pushing or pulling. Vehicles must battle friction and convert stored energy to propel themselves forward and release the weight.

"Most students want to go straight to the lab," said Steven Marra, senior lecturer and instructor for the course. "With this challenge, we force them to think about how energy is transferred, what obstacles they will encounter, and how they will accomplish a goal before they start building a prototype."

Students came up with a wide array of contraptions. Double-Trouble, designed by Amy Sun and Samantha Lott, used a trap door for payload release. Team Accuracy, made up of Sydrake Abdi, Alexandros Bennink, and Mary Theresa Nahill, constructed a battering ram from rubber bands. An entry called Release the Kraken used the energy from the mousetrap to turn an axle, which turned a wheel to move the vehicle forward and drop the weight.

A few vehicles performed flawlessly to "oohhs" and "aahhs" from the crowd; others didn't fare as well. The final showdown was between Release the Kraken and The R&B Butterflies.

The Kraken zipped across the cable, dropped its payload, and hit the target dead-center, giving the win (and three $25 Barnes & Noble gift certificates) to teammates Luke Brown, Evan Adamo, and Josh Harris.

For others, the learning experience was reward enough. After filling a notebook with more than 40 ideas and working on his team's prototype for weeks, Bennink, of Team Accuracy, concluded: "I learned that you have to pick the right design, rather than the one that comes first to your mind. The design that sounds the best at first isn't always the best in the end. ... We found that it's best to get as simple as possible." 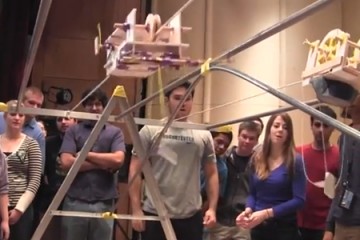