Robert W. Farquhar, a planetary pioneer who designed some of the most esoteric and complex spacecraft trajectories ever attempted and who worked for the Johns Hopkins University Applied Physics Laboratory for 16 years, died from complications following a respiratory illness at his home in Burke, Virginia, on Sunday. He was 83. 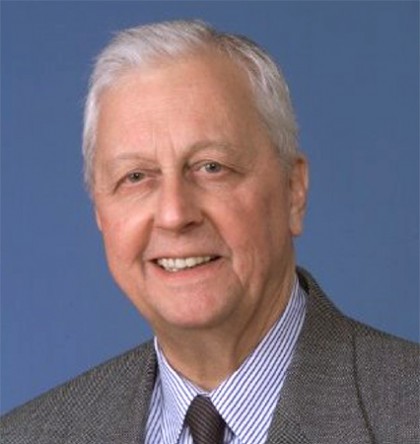 A 50-year veteran of deep-space missions, Farquhar made pivotal contributions to the historic explorations of asteroids and comets.

Farquhar joined APL in 1990 and retired in 2007. During his time there, he applied his trajectory design skills, along with extensive space mission experience and unique insight, to a wide range of challenges in mission design and navigation. He played a key role in APL's initiatives to support deep space missions through NASA's Discovery program.

Most notably, he conceived—and was the flight director for—the Near Earth Asteroid Rendezvous (NEAR) mission to 433 Eros, the first launch of the Discovery program. Launched in 1996, NEAR (later called NEAR-Shoemaker) reached Eros in February 2000 and became the first spacecraft to orbit, study, and then (a year later) safely land on an asteroid. The mission answered many fundamental questions about the nature and origin of asteroids.

Farquhar went on to make critical contributions to other APL-led Discovery missions, including the Comet Nucleus Tour (CONTOUR) and the Mercury Surface, Space Environment, Geochemistry, and Ranging (MESSENGER) mission to the planet Mercury. He also served as the first mission manager for NASA's New Horizons mission, which, following a trajectory that Farquhar envisioned, flew past dwarf planet Pluto and its family of small moons this past July.

"At heart, Bob was an inveterate dreamer: he wanted to expand the reach of humankind in the solar system," said Mike Ryschkewitsch, head of APL's Space Exploration Sector. "Bob was a master of trajectory design and the use of gravity-assist flybys, particularly to reach challenging targets such as Mercury. The Discovery class Messenger mission to Mercury is largely a product of his trajectory design that incorporated multiple gravity assists to reach the inner solar system."

One of the more famous of Farquhar's pre-APL missions was the International Sun Earth Explorer-3, or ISEE-3, launched in August 1978 to study space weather. ISEE-3 was the first mission to exploit Farquhar's development of "halo orbits" around libration points, where the gravitational pull from two celestial bodies is balanced. After ISEE-3's initial mission was accomplished, Farquhar and longtime collaborator David Dunham designed an intricate series of orbits and engine firings that sent the spacecraft away from Earth to perform the first encounter with a comet. Renamed the International Cometary Explorer (ICE), the spacecraft made a textbook pass through the tail of comet Giacobini-Zinner on Sept. 11, 1985.

Farquhar was born in September 1932 and attended elementary and high school in Chicago. As a child, he became interested in aviation, often reading about it and building model airplanes of his own design. Prior to college, he joined the Army and served in Japan and Korea during the Korean War.

He studied aeronautical engineering at the University of Illinois and received his bachelor's degree with honors in 1959. His first studies of orbital mechanics coincided with the launch of the first satellite, Sputnik. He went on to receive his master's degree from the University of California, Los Angeles, in 1961. He worked for a period of time at Lockheed Missiles and Space Company in Sunnyvale, California, and earned his PhD from Stanford University in 1969.

From 1969 to 1990, he worked at NASA's Goddard Space Flight Center in Greenbelt, Maryland, and NASA Headquarters in Washington, D.C., holding a number of positions that included studies of post-Apollo lunar exploration concepts, the lunar shuttle transportation system, and key management positions for numerous satellite projects.

Farquhar received numerous honors and awards from the military, NASA, and a variety of space organizations and associations, and had written, co-written, or contributed to more than 200 publications.

He is survived by his wife, Irina, stepdaughter, Anya, and a host of relatives.