Scientists estimate frozen peaks are one-half mile to one mile high, about the same height as the U.S. Appalachian Mountains 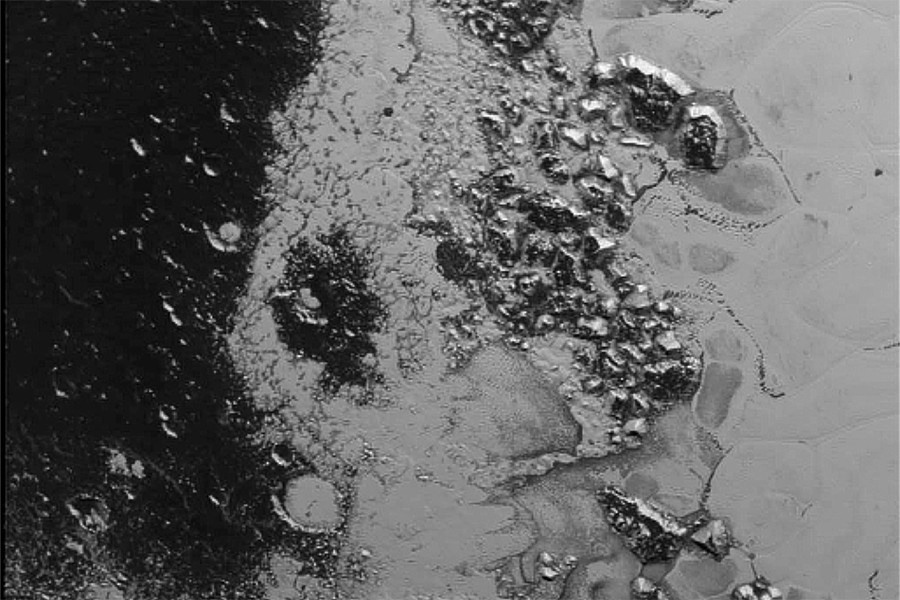 These newly discovered frozen peaks are estimated to be one-half mile to one mile high, about the same height as the Appalachian Mountains in the United States. The Norgay Mountains discovered by New Horizons on July 15 more closely approximate the height of the taller Rocky Mountains in the western U.S.

The new range is just west of the region within Pluto's heart called Sputnik Plain and some 68 miles northwest of the Norgay Mountains. This newest image further illustrates the remarkably well-defined topography along the western edge of Tombaugh Region.

"There is a pronounced difference in texture between the younger, frozen plains to the east and the dark, heavily-cratered terrain to the west," said Jeff Moore, leader of the New Horizons Geology, Geophysics, and Imaging Team at NASA's Ames Research Center in Moffett Field, California. "There's a complex interaction going on between the bright and the dark materials that we're still trying to understand."

While Sputnik Plain is believed to be relatively young in geological terms—perhaps less than 100 million years old—the darker region probably dates back billions of years. Moore notes that the bright, sediment-like material appears to be filling in old craters.

This image was acquired by New Horizons' Long Range Reconnaissance Imager on July 14 from a distance of 48,000 miles and sent back to Earth on July 20. Features as small as a half-mile across are visible. The names of features on Pluto have all been given on an informal basis by the New Horizons team.