An instrument aboard NASA's New Horizon's spacecraft has given us a distant first glimpse of the Pluto system in advance of the craft's historic encounter with the on-again off-again planet and its moons next summer.

The 12 images, captured by the Long Range Reconnaissance Imager, show one full rotation of Charon, the largest of Pluto's five moons. The images were taken July 19-24 from a distance ranging from about 267 million to 262 million miles. Charon is orbiting approximately 11,200 miles above Pluto's surface.

Pluto's four smaller moons—Nix, Hydra, Styx, and Kerberos—are too faint to be seen in these distant images, but will begin to appear in images taken next year as the spacecraft speeds closer to its target, researchers said.

"The image sequence showing Charon revolving around Pluto set a record for close range imaging of Pluto—they were taken from 10 times closer to the planet than the Earth is," says New Horizons mission principal investigator Alan Stern, of the Southwest Research Institute in Boulder, Colo. "But we'll smash that record again and again, starting in January, as approach operations begin.

"We are really excited to see our target and its biggest satellite in motion from our own perch," Stern adds, "less than a year from the historic encounter ahead!"

New Horizons is near the end of its final pre-Pluto annual systems checkout and instrument calibration before Pluto arrival. The New Horizons mission operations team at the Johns Hopkins Applied Physics Laboratory will put the spacecraft back into hibernation on Aug. 29, just four days after New Horizons crosses the orbit of Neptune on Aug. 25.

New Horizons is expected to become the first spacecraft to visit the Pluto system in July of 2015. 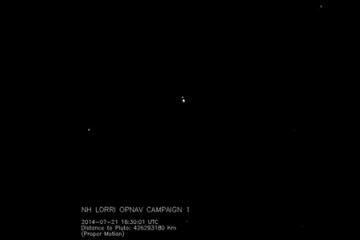