Turbulence to blame for activity that breaks accepted rule of physics 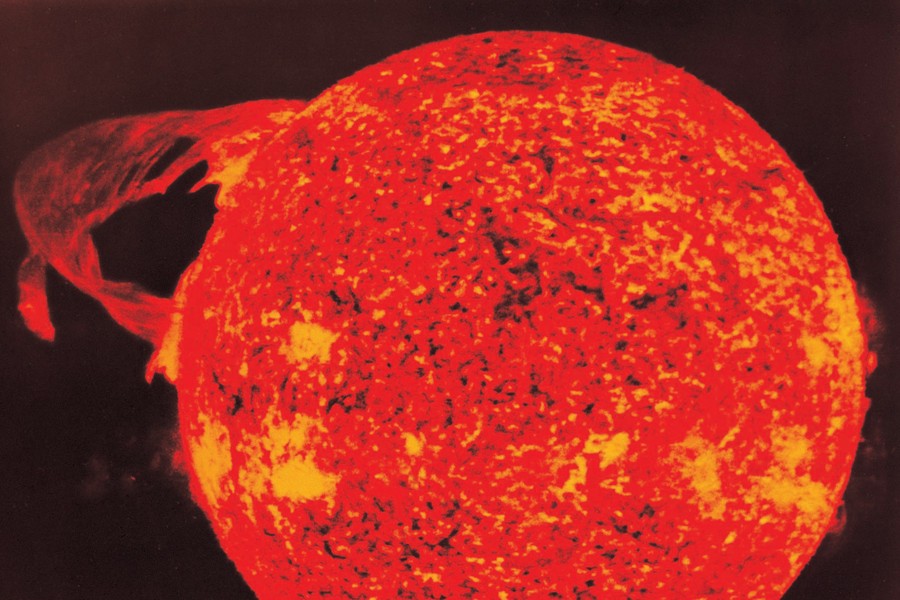 When a solar flare filled with charged particles erupts from the sun, its magnetic fields sometime break a widely accepted rule of physics. The flux-freezing theorem dictates that the magnetic lines of force should flow away in lock-step with the particles, whole and unbroken. Instead, the lines sometimes break apart and quickly reconnect in a way that has mystified astrophysicists.

But in a paper published in the May 23 issue of the journal Nature, an interdisciplinary research team led by a Johns Hopkins mathematical physicist says it has found a key to the mystery. The culprit, the group proposed, is turbulence—the same sort of violent disorder that can jostle a passenger jet when it occurs in the atmosphere. Using complex computer modeling to mimic what happens to magnetic fields when they encounter turbulence within a solar flare, the researchers built their case, explaining why the usual rule did not apply.

"The flux-freezing theorem often explains things beautifully," said Gregory Eyink, a Department of Applied Mathematics and Statistics professor who was lead author of the Nature study. "But in other instances, it fails miserably. We wanted to figure out why this failure occurs."

The flux-freezing theorem was developed 70 years ago by Hannes Alfv&eacute;n, who later won a Nobel Prize in physics for closely related work. His principle states that magnetic lines of force are carried along in a moving fluid like strands of thread cast into a river, and thus they can never "break" and reconnect. But scientists have discovered that within violent solar flares, the principle does not always hold true. Studies of these flares have determined that their magnetic field lines sometimes do break like stretched rubber bands and reconnect in as little as 15 minutes, releasing vast amounts of energy that power the flare. "But the flux-freezing principle of modern plasma physics implies that this process in the solar corona should take a million years," Eyink said. "A big problem in astrophysics is that no one could explain why flux-freezing works in some cases but not others."

Some scientists suspected that turbulence was playing havoc with the behavior predicted by this principle. To find out, Eyink teamed up with other experts in astrophysics, mechanical engineering, data management, and computer science, based at Johns Hopkins and other institutions. "By necessity, this was a highly collaborative effort," Eyink said. "Everyone was contributing their expertise. No one person could have accomplished this."

The team developed a computer simulation to replicate what happens under various conditions to the charged particles that exist in a plasma state of matter within solar flares. "Our answer was very surprising," Eyink said. "Magnetic flux-freezing no longer holds true when the plasma becomes turbulent. Most physicists expected that flux-freezing would play an even larger role as the plasma became more highly conducting and more turbulent, but, as a matter of fact, it breaks down completely. In an even greater surprise, we found that the motion of the magnetic field lines becomes completely random. I do not mean 'chaotic,' but instead as unpredictable as quantum mechanics. Rather than flowing in an orderly, deterministic fashion, the magnetic field lines instead spread out like a roiling plume of smoke."

Although some scholars may still believe there are other explanations for solar flares, Eyink said, "I think we made a pretty compelling case that turbulence alone can account for field-line breaking."

The way the researchers from different disciplines teamed up with Eyink to solve the solar flare puzzle was particularly noteworthy. "We used ground-breaking new database methods, like those employed in the Sloan Digital Sky Survey, combined with high-performance computing techniques and original mathematical developments," he said. "The work required a perfect marriage of physics, mathematics and computer science to develop a fundamentally new approach to performing research with very large datasets."

Eyink added that the research could lead to a better understanding of solar flares and mass ejections of material from the sun's corona. Such powerful "space weather" or geomagnetic storms can endanger astronauts, knock out communications satellites and even lead to massive blackouts of electrical power grids on Earth, he said.

The co-authors from other institutions were Ethan Vishniac, from the Department of Physics and Engineering Physics, University of Saskatchewan, Canada; and Kai B&uuml;rger, from Fakult&auml;t f&uuml;r Informatik, Technische Universit&auml;t M&uuml;nchen, Munich, Germany.