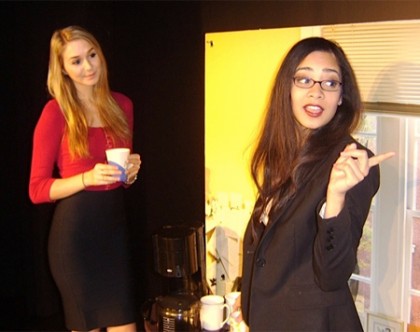 Image caption: Eva Gurfein (left) as Nell and Devika Bhise as Win in the in the Johns Hopkins Theatre Arts and Studies program's performance of "Top Girls."

The final word in Caryl Churchill's whip-smart 1982 play Top Girls is "frightening," and in the recent production staged by undergraduates in the Johns Hopkins Theatre Arts and Studies program, it lands with the necessary complicated potency. It's uttered by the 16-year-old Angie (Beth Flaherty), who, late at night, has wandered down into the working-class kitchen of her single-mother's home to find her aunt Marlene (Victoria Bata) having a budding alcoholic's one more drink before going to bed. Just what Angie, or Churchill, may find frightening is devastatingly left open to interpretation. Did Angie overhear the heated argument Marlene, the London professional, had with her sister Joyce (Sarenka Smith), Angie's adoptive mother and a housecleaner in the small town where the sisters grew up? Did Angie figure out who her mother really is and why she ended up with Joyce? Or is Churchill referring to the economic rift that exists between these two sisters based entirely on their employment status? Is it a comment on the personal sacrifices and choices women have to make in order to achieve success as conventionally defined by the masculine business world, and how the costs of those choices ripple out to impact everybody in a woman's immediate circle?

The answer is all of the above, and kudos to this production for making the political barbs in Churchill's complicated riot of a play resonate today. Under the direction of Theatre Arts and Studies program director John Astin, Top Girls' cast of seven actresses adroitly handles this heated indictment of 1980s Thatcherism. The two-act production follows Marlene's rising career at the Top Girls employment agency, where she's recently been promoted over a male co-worker whose wife (Smith again) comes to ask Marlene if she might decline the promotion. Marlene works alongside Win (Devika Bhise) and Nell (Eva Gurfein), two other ambitious, power-suited women who understand the path to success: confidence, coldness, and a personal life unburdened by significant others or offspring.

Meanwhile, Angie is hurtling toward young adulthood while remaining emotionally immature, her best friend the 12-year-old Kit (Rosa Acheson). When Marlene comes to visit, Joyce tries to get her to see that Angie's future could be as bleak as the women Marlene now looks down at in their hometown. By the time the two sisters start talking about the proverbial state of England, they realize that they stand at opposite ends of the social ladder. Marlene is a woman with a career; Joyce cleans up after people who have careers.

Churchill writes with a critical precision, and in these quick-moving scenes she's wondering if a woman's success as defined in Thatcherite England is merely enlisting more women into the higher ranks of capitalism's army of social inequity. That's not the same thing as gender parity at all, and it's not an easy idea to present onstage with any subtlety. Fortunately the cast winningly handles Top Girls' opening act, an anachronistic, anarchic snowball that provides the intellectual framework for its weightier discussions. The play opens as Marlene arrives at a restaurant where she's throwing a celebratory dinner party in light of her new promotion. And she's invited five guests—all formidable women of history. There's Isabella Bird (Smith), the 19th-century British explorer; Lady Nijo (Bhise), the 12th-century Japanese concubine and memoirist; Pope Joan (Amanda Leininger), the fictitious female pope of the ninth century who was stoned to death when her gender was discovered; Dull Gret (Flaherty), the Flemish folk figure who led a female army to hell as depicted in a Pieter Bruegel painting; and Patient Griselda (Gurfein), the severely put-upon wife of folktales as depicted in stories by Petrarch and Chaucer.

One by one they come to Marlene's table as bottle after bottle of wine gets served and consumed. One by one they recount their tales, often talking over each other. Imagine My Dinner with Andre starring Sex and the City's ladies and spiced with a heady dose of gender politics. The cast gamely handles this extended screwball scene, with Smith's gloriously pompous Isabella Bird and Flaherty's hilariously monosyllabic Dull Gret delivering Churchill's lines with all their absurd humor intact. The scene plants the idea that these women that history has deemed noteworthy have led lives at times riddled with crushing loneliness, spectacular violence, and pervasive fear. And it puts Marlene, the upwardly mobile career everywoman, at their table, an implication that grows more and more complicated as they drink themselves into their cups and the play progresses. "We've all come a long way," Marlene says toward the dinner's end, inviting her guests to raise their glasses to their shared successes. "To our courage and the way we've changed our lives and our extraordinary achievements."