"Getting up a lecture of this sort is no child's play," notes a Johns Hopkins history professor about the 11 hours he spent preparing for a single class. Jonathan Zimmerman's new book, The Amateur Hour (JHU Press) is the first full-length history of college teaching in America. It's the kind of heavy sigh that's floated through academic Twitter over the past year of Zoom classrooms. Zimmerman, however, is quoting J. Franklin Jameson, who noted this observation in his diary the same year he earned his Hopkins doctorate, 1882. This detail helps Zimmerman discuss what he calls the paradoxes of college teaching in America, a "highly public act that remains mostly private." Scholars submit their work to peer review for career advancement, but discussions about teaching experience that occupies the bulk of their careers? Not so much. 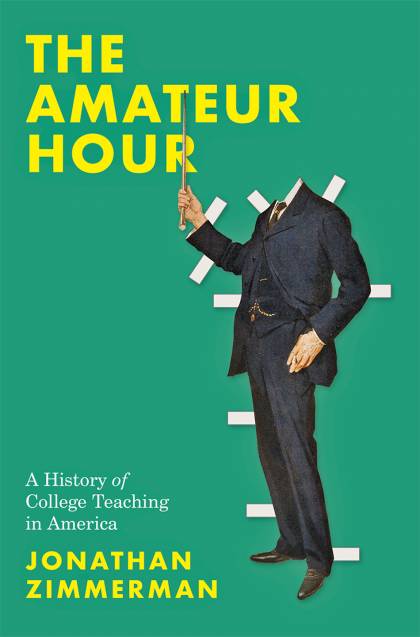 Zimmerman, A&S '93 (PhD), is fascinated by how long this attitude has persisted on American campuses, where teaching remains, he writes, "relatively static across time, even as the winds of change have swirled around it." The University of Pennsylvania professor with decades of classroom experience proves himself a nimble guide through those winds of change. In Amateur, one of Zimmerman's most interesting themes is the effort to make college teaching more personal, an attitude seemingly at odds with the impersonal tradition of evidence-based research. Calls were being made to individualize the college experience as early as the 1930s, but, as Zimmerman writes, by the mid-20th century the "reform of college teaching had already assumed a predictable pattern: Committees would convene, statements would be issued, and most professors would continue teaching as they always had."

Zimmerman's epilogue begins in the 1990s, by which time student evaluations of professors were being used by universities to determine professors' tenure and salary, even though they don't say anything about a lecturer's classroom effectiveness. The Amateur Hour may not propose any solutions to that problem, but as Zimmerman notes in the book's beginning, professors "can't say that things will be better—or worse—until you know what came before. And we don't."

A seat at the table