Filipe Campante, a political economist; Nilabh Shastri, an immunologist; and Otis Brawley, an authority on cancer screening and prevention, have been named Bloomberg Distinguished Professors. They are the 37th, 38th, and 39th BDPs appointed to the program, which aims to attract to the university 50 world-renowned professors with collaborative and cross-disciplinary research interests. Campante, whose title is Bloomberg Distinguished Associate Professor of International Economics, will be based at the School of Advanced International Studies, with a joint appointment in the Krieger School of Arts and Sciences' Department of Economics. He joins Johns Hopkins from the Harvard Kennedy School. Shastri works on understanding how the immune system recognizes and responds to quickly changing foreign elements. He joins the Department of Pathology in the School of Medicine and the Department of Biology in the School of Arts and Sciences. Shastri spent more than 30 years at the University of California, Berkeley, where he was head of the Division of Immunology and Pathogenesis. Brawley most recently served as chief medical and scientific officer for the American Cancer Society and a professor in the Department of Hematology and Medical Oncology at Emory University School of Medicine. At Hopkins, he will lead a broad interdisciplinary research effort on cancer health disparities at the Bloomberg School of Public Health and the Kimmel Comprehensive Cancer Center. He will also teach in the schools of Public Health, Medicine, and Arts and Sciences.

In U.S. News & World Report's latest rankings of online graduate programs, the School of Nursing moved up to No. 1 in the nation, from No. 5 last year, in the Nursing category. In the Information Technology category, the Whiting School's IT program was rated No. 5 for the second year in a row, and in the Graduate Engineering category, its online engineering program tied with University of Illinois, Urbana-Champaign at No. 14, up from No. 19 last year.

Matthew Porterfield, a lecturer in the Film and Media Studies Program in the Krieger School, won the top jury prize for an American independent feature at the 2018 Champs-Élysées Film Festival in Paris for his film Sollers Point.

Whiting School of Engineering Professors Gregory Hager in Computer Science and K.T. Ramesh in Mechanical Engineering were among the 416 fellows elected to the American Association for the Advancement of Science. Hager directs the Malone Center for Engineering in Healthcare, and Ramesh leads the Hopkins Extreme Materials Institute. AAAS recognizes scholars whose research is considered by their peers to be scientifically or socially distinguished.

Krieger School seniors Jeremy Ratcliff and Chloe Pacyna were awarded Marshall Scholarships by the British government, allowing them to study in the U.K. program of their choice. Ratcliff, a molecular and cellular biology and public health studies major, will pursue a doctoral degree in infectious disease, immunology, and translational medicine at the University of Oxford. Pacyna, a biophysics and history of science, medicine, and technology major, will work toward a doctoral degree in biological sciences at the University of Cambridge. 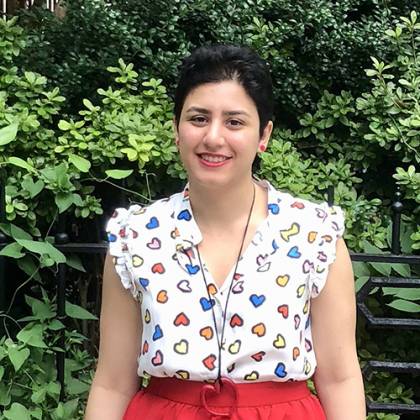 Also off to Oxford on a prestigious scholarship is Alaleh Azhir, a Whiting School senior who has a triple major in biomedical engineering, computer science, and applied mathematics and statistics. She was awarded a Rhodes Scholarship, which she will use to work toward her master's in women's and reproductive health. Azhir was one of 32 American students selected for the award from an applicant pool of 880.

Timothy Heckman, a professor and chairman of the Krieger School's Department of Physics and Astronomy, was awarded the 2018 Catherine Wolfe Bruce Gold Medal by the Astronomical Society of the Pacific. The medal, awarded annually, recognizes a lifetime of outstanding achievement and contributions to astrophysics research.

A team of students from Carey Business School, the Bloomberg School, and the Whiting School won first place in the annual Pfizer Case Competition, hosted by the Johns Hopkins Health- care Business Association student organization and judged by a panel of Pfizer executives. The Johns Hopkins team received a $10,000 award.

In National Science Foundation rankings for fiscal 2017, Johns Hopkins led all U.S. universities in research and development spending for the 39th consecutive year, totaling a record $2.562 billion. In a separate NSF ranking, Johns Hopkins was again first in spending on research sponsored by federal agencies, such as the NSF and the National Institutes of Health, with $2.179 billion in federal funding. Federal funding accounted for 85 percent of the university's R&D expenditure in fiscal 2017. Lawrence Jackson, a Bloomberg Distinguished Professor in the departments of English and History in the Krieger School, was awarded the Mystery Writers of America 2018 Edgar Award in the Best Critical/ Biographical category for his book Chester B. Himes: A Biography. The book also won the 2018 Black Caucus of the American Library Association's Literary Award for Nonfiction.

Jacquelyn Campbell, a professor in the Department of Community-Public Health Nursing in the School of Nursing, earned two of the most prestigious awards in nursing: the Ada Sue Hinshaw Award from the Friends of the National Institute for Nursing Research and the American Academy of Nursing's 2018 Living Legend. Both awards reflect Campbell's long-standing contributions to domestic violence prevention and careerlong leadership in nursing and research.

Drew Pardoll has been elected a fellow of the National Academy of Inventors. He is a professor of oncology, medicine, pathology, and molecular biology and genetics in the School of Medicine. Election to NAI Fellow status is the highest professional distinction accorded to academic inventors. Alice McDermott, a professor in the Krieger School's Writing Seminars, has been awarded the Prix Femina étranger, France's award for the best foreign novel of the year, for her book The Ninth Hour. Established in 1904, the Prix Femina is awarded to the best French and foreign novels written by a man or woman. The Femina jury is composed exclusively of women writers and academics.

Keri M. Guilbault, an assistant professor of gifted education in the School of Education, has been elected president of the Maryland Coalition for Gifted and Talented Education. She is also a trustee of the Mensa Education and Research Foundation.