Teams were challenged to develop a vaccine for a leading bacterial cause of health care-associated infections in the U.S. 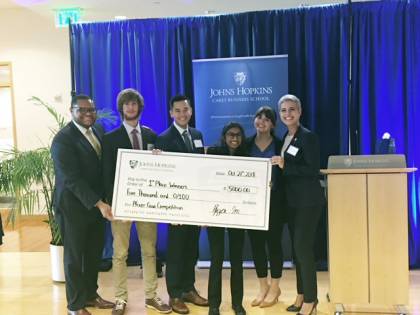 Image caption: The team from Johns Hopkins included students enrolled in the Carey Business School, the Bloomberg School of Public Health, and the Whiting School of Engineering

The competition, in its sixth year, requires students to apply academic theory to real-world business and societal challenges while receiving feedback and strategic insight from business executives. In all, 47 student teams from universities across the nation traveled to Baltimore for the competition, which was hosted by the Johns Hopkins Healthcare Business Association student organization and judged by a panel of Pfizer executives.

The teams were challenged to develop a strategy to introduce an effective vaccine against C. difficile, a widespread bacterium that is the leading cause of health care-associated infections in the U.S. and an increasing disease concern worldwide. To date, most efforts concerning C. difficile have concentrated on the treatment of associated illnesses caused by the pathogen rather than prevention.

The Johns Hopkins team received a $10,000 award for their plan to establish a potential vaccine, articulating the steps involved, key stakeholders, and success metrics.

"Our diverse team helped us look at the case from different perspectives," said Priya Arunachalam, a Global MBA student from Carey who was was part this year's winning team as well as the team that took first place a year ago. "Our presentation provided a thorough investigation of the market for C. difficile vaccines. Our team's analysis and recommendations are viable because they took into account reimbursement strategies and physician workflow."

Arunachalam's teammates included: Delaram Jasmine Taghipour, who is enrolled at Carey and the Johns Hopkins Bloomberg School of Public Health; Carey student Joseph Anthony Tisinger; Devyn Bell from the Bloomberg School; and Florian Pontani, a graduate student in mechanical engineering at the Whiting School of Engineering.

A team from Carnegie Mellon finished second, and the third-place team was from the Perelman School of Medicine at the University of Pennsylvania. 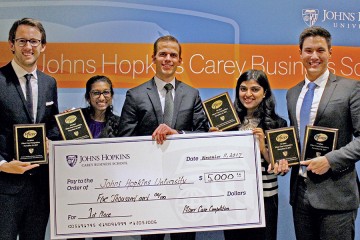 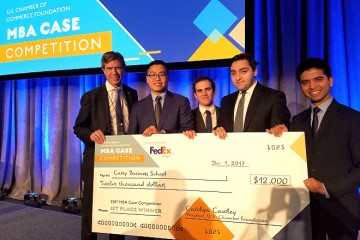