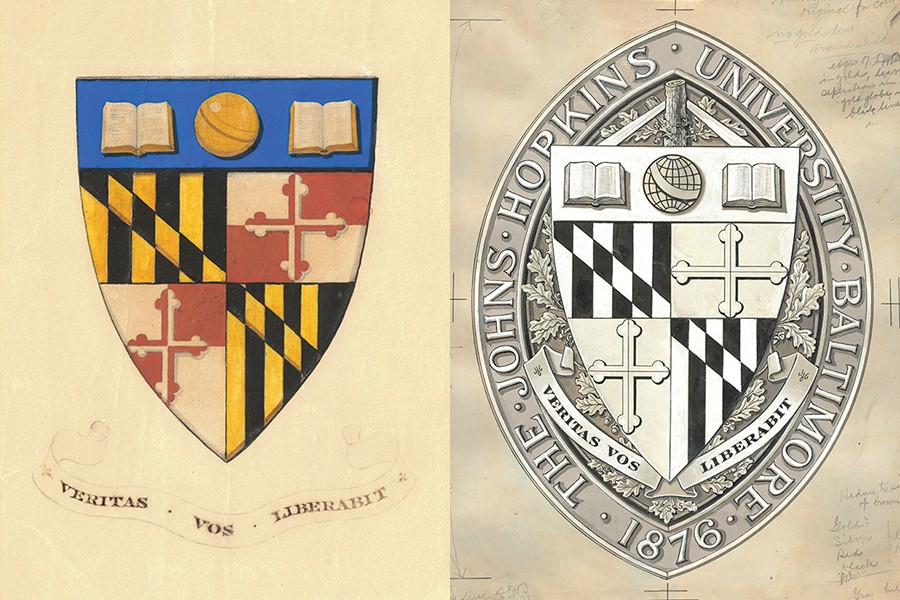 Image caption: Side-by-side drawings of the university seal show the motto as it was conceived during a meeting of the board of trustees December 7, 1885

Nothing But the Truth

I am writing in response to Rowland E. King's letter [Dialogue, Spring]. Mr. King believes the original motto of the Johns Hopkins University was Veritas vos Dei Liberabit. This was not the case. John C. French outlines the origins of the university seal and motto in A History of the University Founded by Johns Hopkins (pp. 365–366). According to French, the motto has always been Veritas vos Liberabit, and it was used in that form since our founding, probably by Daniel Coit Gilman himself.

An early version of a seal was adopted by the trustees in 1879, intended to be affixed to official documents. Based on drawings reproduced in the minutes of the board of trustees, this seal was very simple, containing "1876" in the center of a circle, with "The Johns Hopkins University" and "Baltimore, Maryland" around the perimeter of the circle, with no motto of any kind.

A more elaborate seal for ceremonial functions was adopted by the trustees in 1885, and this seal included a motto as one of the elements. The University Archives preserves the original handwritten minutes of the board of trustees going back to 1870. The minutes for December 7, 1885, include a description of the various elements of the seal, reading in part: "The escutcheon shall be represented as suspended from an oak branch; below shall be the motto, Veritas vos Liberabit."

There is no evidence in the minutes that the trustees ever adopted a motto separate or different from what appears as part of the seal. I checked the indices to the minutes of the board of trustees through 2003; no changes to the seal or its elements were noted, and no further mention was made of a motto after 1885. The Archives also holds an early color printing of the seal, bearing the same motto [see images above].

Perhaps someone in Mr. King's class thought "Dei" was part of the motto and included that word on their class banner based on that belief. Nevertheless, it is evident from the original sources that the motto of this university is the same one adopted as part of the seal in 1885: Veritas vos Liberabit, or "The Truth Will Set You Free."

I was in the Navy, currently teach at the Naval Academy, and have a PhD from Johns Hopkins. And Jordan Tropf ["Man in Motion," Spring] was in my physical chemistry class. He is both an outstanding student and athlete. He is a great representative of the outstanding graduates from the Naval Academy. Well done.

Thank you for this wonderful look back ["Soap Suds Radio," Alumni, Spring]. I was glad to be associated with WJHU as a Spotlight on Composers DJ from 1982 to 1983, and I credit that experience with forming my musical tastes and interests. There was a great camaraderie as well. My best memories are of the woman who had an electronic/space music show right after mine; David Hurwitz who managed the classical shows; and the only full-time staff person whose name I no longer remember but who saved me (and my FCC license) when I left the mic open and started using certain words in conversation with someone else in the studio.

My parents, who lived three blocks north, had a hard time receiving a signal, especially when the wind blew from the north and pushed back those radio waves.

My parents, who lived three blocks north, had a hard time receiving a signal, especially when the wind blew from the north and pushed back those radio waves, but my favorite listener, Eva, never seemed to have problems. ... I have tried listening online from time to time, but for whatever reason, it doesn't work. Great to know it is still there.