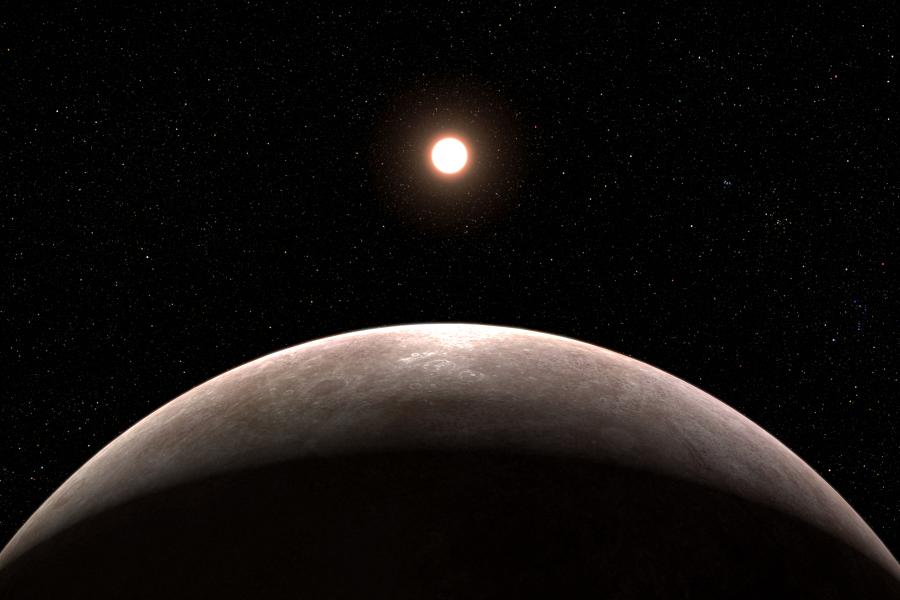 A team led by researchers at the Johns Hopkins Applied Physics Laboratory has confirmed the discovery of an exoplanet—a planet orbiting another star—by NASA's James Webb Space Telescope.

Formally logged as LHS 475b, the planet orbits a red dwarf star roughly 41 light-years away, and it's almost exactly the size of Earth, measuring 99% of our planet's diameter.

"I think rocky exoplanets are the new frontier with JWST," said APL astrophysicist Kevin Stevenson, a co-lead on the study. "Just as NASA's Hubble and Spitzer space telescopes paved a new field with the discovery of hot, Jupiter-sized exoplanets, JWST is going to open a whole new avenue of research into smaller, rocky worlds that were once undetectable from Earth."

"[James Webb Space Telescope] is going to open a whole new avenue of research into smaller, rocky worlds that were once undetectable from Earth."
Kevin Stevenson
APL astrophysicist, study co-lead

The researchers focused on the rocky world after carefully reviewing targets of interest from NASA's Transiting Exoplanet Survey Satellite, which could only hint at the planet's existence because of the limitations of its cameras and the small signal from the planet. Webb's Near Infrared Spectrograph, however, clearly confirmed the planet after two observations last summer of it transiting, or passing in front of, its star.

The researchers presented their finding to media on Wednesday at the annual conference of the American Astronomical Society.

"Missions like Webb are among the boldest NASA projects ever undertaken, uniquely positioned to answer foundational questions about our home and its place in the cosmos," said Jason Kalirai, the Civil Space Mission Area Executive at APL and former Webb project scientist at the Space Telescope Science Institute. "The discovery of an Earth-sized planet in Webb's first year paves the way for a powerful new exploration of rocky exoplanets and the opportunity to place Earth in a broader context."

Operating under NASA's Cycle 1 General Observer program, the researchers have been assessing Webb's ability to detect atmospheres particularly around small, Earth-sized planets. They're hunting for a universal line between planets that do and do not have atmospheres—a sort of cosmic shoreline, as Stevenson puts it. Such a line exists in our solar system, following mass as it grows from airless asteroids to thick atmospheric soups around the gas giants. It's unknown whether this holds outside the solar system.

Last year, the team contributed to the first clear signal of carbon dioxide around a large exoplanet, the Jupiter-sized planet called WASP-39b. But the holy grail has been detecting atmospheres around small Earth-sized exoplanets, which only Webb can do.

Image caption: A light curve from NASA’s James Webb Space Telescope’s Near-Infrared Spectrograph (NIRSpec) shows the change in brightness from the LHS 475 star system over time as the planet transited the star on Aug. 31, 2022. LHS 475b is a rocky, Earth-sized exoplanet that orbits a red dwarf star roughly 41 light-years away. The planet is extremely close to its star, completing one orbit in two Earth-days. The planet’s confirmation was made possible by Webb’s data.

By analyzing light from LHS 475b's star as the planet transited in front of it, the team attempted to gauge the presence and composition of its atmosphere. The data confirmed the planet as an Earth-sized terrestrial world just a few hundred degrees warmer than our own planet, but the researchers are still uncertain if it has an atmosphere.

"The observatory's data is beautiful," said astrophysicist Erin May, an exoplanet astronomer and team member from APL. "The telescope is so sensitive that it can easily detect a range of molecules around the planet, but we can't yet make any definitive conclusions about the planet's atmosphere."

Taking just two Earth-days to orbit its red dwarf star, LHS 475b is closer to its star than any planet in our solar system. Such proximity to the sun would easily boil and blow off any atmosphere, but because the temperature of LHS 475b's star is less than half that of the sun, the researchers project the planet could still have an atmosphere. 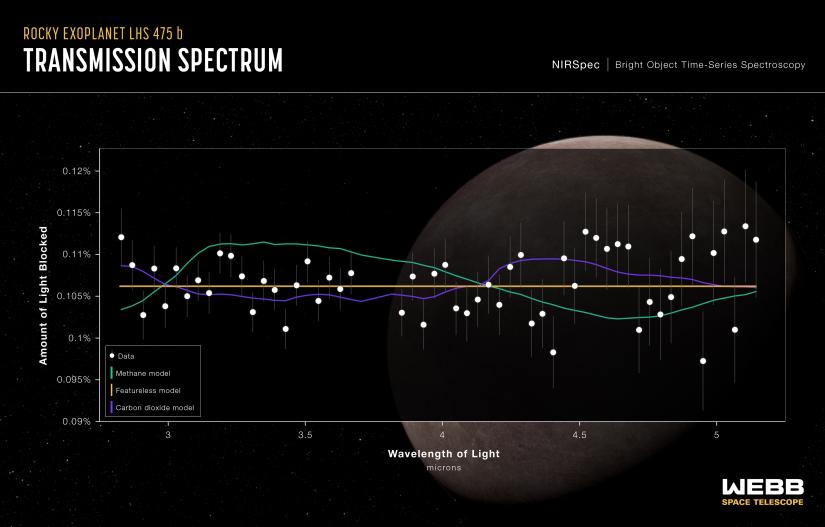 Image caption: A transmission spectrum collected from the Earth-sized exoplanet LHS 475b, collected by researchers using the Near-Infrared Spectrograph (NIRSpec) instrument on NASA’s James Webb Space Telescope on Aug. 31, 2022. The spectrum shows Webb did not observe a detectable quantity of any element or molecule. The data (white dots) is consistent with a featureless spectrum representative of a planet that has no atmosphere (yellow line). The purple line represents a pure carbon dioxide atmosphere and is indistinguishable from a flat line at the current level of precision. The green line represents a pure methane atmosphere and is ruled out by the available data.

The spectrum allowed the team to rule out a few possibilities, such as a hydrogen-dominated atmosphere like Jupiter's, or a thick, methane-dominated atmosphere like Saturn's largest moon Titan, said APL exoplanet researcher Jacob Lustig-Yaeger. But the data still pins the team between two bookend possibilities: a planet with no atmosphere, or one rich in carbon dioxide—a counterintuitive dichotomy caused by carbon dioxide's relatively heavy mass, which prevents it from expanding enough to be easily registered, he explained.

Distinguishing between these possibilities will require measurements that are even more precise. The researchers are scheduled to collect additional spectra with a third observation of the planet next summer. They suggest that observing it during a secondary eclipse when the planet just starts to orbit behind its star would allow scientists to determine whether the planet has clouds, which could help determine if the planet's atmosphere is like Venus—cloudy and rich in carbon dioxide.

"We're at the forefront of studying small, rocky exoplanets," Lustig-Yaeger said. "We have barely begun scratching the surface of what their atmospheres might be like." 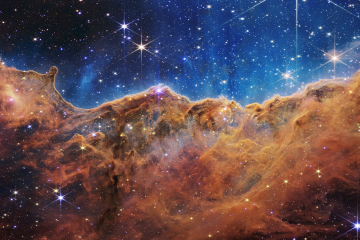 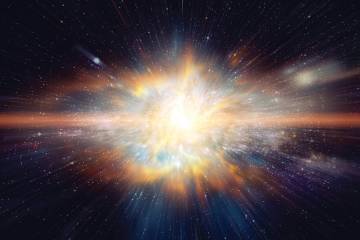