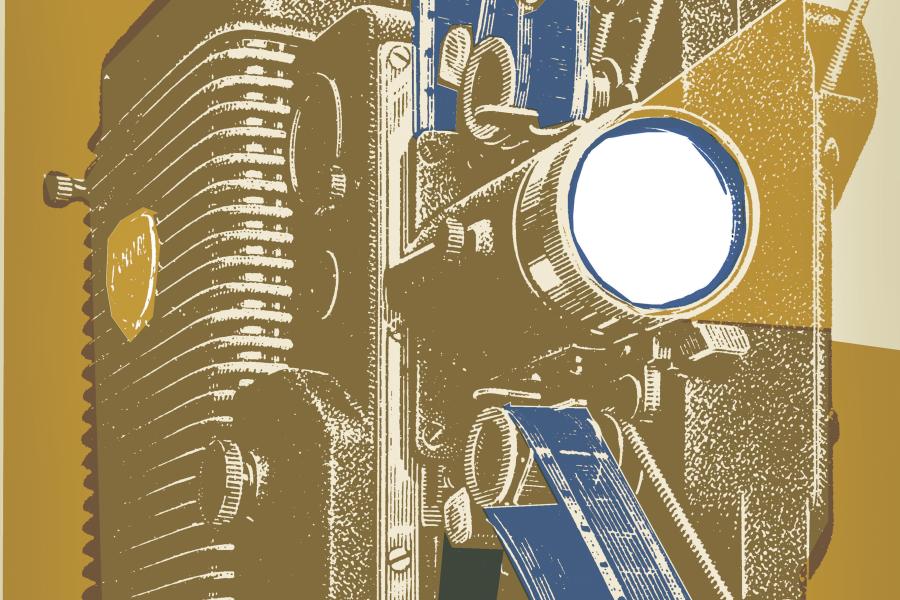 The Sheridan Libraries has acquired the Academic Film Archive of North America, an eclectic collection of more than 7,600 vintage 16-mm films

When the process began to bring a massive trove of vintage educational films to Johns Hopkins, film program director Adam Rodgers took to exploring the collection online. He hoped to spark a memory from childhood, something involving a rattling 16-mm projector in a darkened classroom.

"Just a few minutes into my search, I stumbled onto a title that made my heart race," says Rodgers, who leads the Film and Media Studies program at Hopkins. It was Hangman, an 11-minute animated parable Rodgers remembers seeing sometime in junior high. "It's haunted me since," he says of the short, a startlingly mature and macabre piece for a young audience.

Many Americans who came of age in the latter half of the 20th century have similar memories of those projector films from their schooldays, in the time before cable or VHS. The Academic Film Archive of North America, which the Johns Hopkins Sheridan Libraries acquired this fall, is devoted to preserving and celebrating the eclectic treasures of that unsung corner of filmmaking.

The vast collection—some 7,600 films strong, spanning topics from ancient Greece, comets, Shakespeare, and the Ice Age to canoe-building and silk-weaving—comes by way of San Jose, California, donated by Geoff Alexander, the archive's longtime director and CEO. Alexander started amassing his collection in the 1990s, buying old 16-mm educational films his local library would have otherwise discarded.

"We've always made it a point to save these films from landfills," says Alexander, who turned the archive into a nonprofit in 2001.

When storage space ran out last year in the collection's longtime home in warehouses of the History San Jose museum, Alexander launched a nationwide hunt for a new host institution. Learning of the strength of Johns Hopkins' film program, he reached out to Rodgers and found his enthusiasm matched.

Saving a Film Genre: A Q&A with Geoff Alexander

In November, a 53-foot refrigerated truck delivered the films from San Jose to the Libraries Service Center at Johns Hopkins, an archival warehouse on the grounds of the Applied Physics Laboratory in Laurel, Maryland, about 20 minutes south of Baltimore.

For Hopkins film students, Rodgers sees immense merit in the 16-mm format and the wide sampling of films in the archive, which he hopes will become part of several classes. "It's a beautiful format, but it's expensive and viewed in some institutions as outdated," he says. "But we think it has a great deal of value pedagogically and artistically."

According to Alexander's materials, a boom in these academic films erupted after the launch of Sputnik in 1957, with U.S. government and education officials racing to lift American students to the level of their Soviet counterparts. Millions in federal funds were funneled to educational film companies, marking "the greatest governmental largesse ever bestowed on makers of non–feature films," according to the materials.

"It was a time in history when films became an important conduit for education," says Donald Juedes, an academic liaison librarian who worked with Rodgers to ensure the archive came to Hopkins.

With such resources backing them, filmmakers of this genre "had the ability to go out there and make the films they wanted to make, largely unhindered," Rodgers says. "So it became like a big playground for experimentation."

That helps explain the esoteric nature of some of the films, such as The Great Illusion (1954), a silent film described as exploring "abstract art as it relates to alcohol-induced myopia." Some were socially progressive, such as The Lost Generation of Prince Edward's County, exploring persistent educational segregation in Virginia in the 1960s. As Alexander notes, not all the films were created for school kids. "Many are documentary films, many consist of lost footage, some are 'soundies' made for theatrical distribution, some are silent films made to accompany live lectures," he says. "The audiences are varied."

In some cases, the filmmakers went on to more storied careers. The collection includes works by Thomas G. Smith, who was later hired by George Lucas to do visual effects for Raiders of the Lost Ark, E.T., and Return of the Jedi; British documentary filmmaker Richard Leacock, a pioneer of the "cinema verite" movement; and cinematographer Isidore Mankofsky, who worked on The Muppet Movie and The Jazz Singer. Also featured are Homer Groening, the filmmaker father of Simpsons creator Matt Groening and namesake of Homer Simpson; and Johanna Alemann, the first female academic filmmaker to run her own company (and subject of a recent award-winning documentary.)

"This will really be a process of discovery, and we'll probably be learning new things about it week by week."
Winston Tabb
Former Sheridan Libraries dean

With the arrival of the archive to Hopkins, librarians and archivists will be working to unpack, process, and fully catalog the films for scholarly access, while parsing out accompanying ephemera and artifacts, such as film study guides, photographs, and projectors.

"You always find new things when you start the cataloging and the processing," says Winston Tabb, whose tenure as Sheridan Dean of University Libraries, Archives and Museums concluded at the end of 2022. "This will really be a process of discovery, and we'll probably be learning new things about the archive week by week."

Alexander, who will continue heading the research and historical nonprofit that oversees the archive, says he feels assured about where the collection has landed. "People say, 'Doesn't it break your heart that you're losing your archive?'" he says. "But I say no. Let me tell you something, we all get old and we all die, but I feel very fortunate to be able to see this archive go to a great place where great things will happen to it and students will make films from it. To get to experience that in my lifetime, I'm a lucky guy."